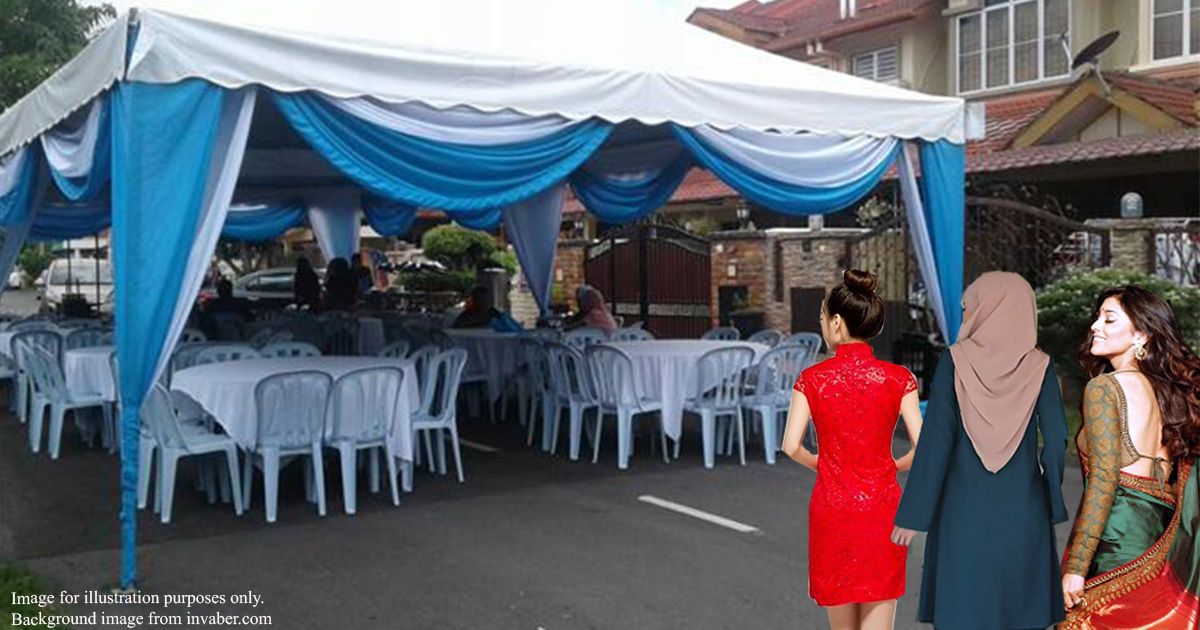 Is it illegal to block your neighbourhood road with a kenduri tent?

As Malaysians, most of us have attended our neighbours’ rumah terbuka during festive seasons. Tents are also pitched during weddings or funerals –basically any kind of function which is held at home for personal reasons. Most of the time, these tents take up half, or almost the entire road on the street. Now, this may lead to an important question which would have been running in most of our minds for a very long time, on whether setting up tents in a neighbourhood is actually legal...or not?

The answer to that question is, it isn’t legal, but it can be. As confusing as this may sound. Let’s break it down into two main parts for some clarity.

It is actually illegal to obstruct roads.

Under Section 46(1)(a) of the Street, Drainage and Building Act 1974, it is an offence to erect and maintain an obstruction in a public place.

“(1) Any person who —
(a) builds, erects, sets up or maintains or permits to be built, erected or set up or maintained any wall, fence, rail, post or any accumulation of any substance, or other obstruction, in any public place...”

The Act says that setting up any kind of substance that will obstruct a public area is considered to be illegal. You can actually be liable for this as an offense, whereby you may be arrested without a warrant or asked to pay a fine up to RM500. In the case of a subsequent conviction, the fine goes up but not exceeding RM1,000.

However, there has been an exception given to this rule for temporary obstructions during festivals, etc.

“(4) Nothing herein shall prevent the local authority from allowing any temporary erections in any public place or the temporary use of any part of a public place on occasions of festivals and ceremonies.”

This means that the Act allows the local authorities to permit the public to set up tents in front of their homes during any occasions or ceremonies.

So the next question is, where do you apply for a permit?

From your local council, of course!

Every district in Malaysia has its own local council that helps enforce laws made by the Government (ie; MBPJ, MBJB, MBPP). So when it comes to setting up tents for functions in your home, it is best to get a permit from your local council  in order to avoid breaking the law or having the local authorities crashing your kenduri.

We checked with the Kajang Municipal Council and the Kuala Lumpur City Hall on this matter and have been told that you can get these forms directly from their office, depending on which area you live in. For example, Dewan Bandaraya Kuala Lumpur (DBKL) already has the application form on their site to make it easier for people to apply. It also takes approximately two weeks for the application to process, so it’s best to do it around that duration and ahead of your function.

But you’re probably thinking to yourself. “I’m pretty sure my neighbour didn’t apply to have that 3-day funeral...” and that may largely be because…

It’s okay if your neighbours are fine with it

At the end of the day, it’s not just the law that stands but it’s also the sense of community that neighbours should have with each other.

For the most part there should be some sense of give and take, especially for unexpected affairs such as a funeral or your son’s shotgun marriage – with the understanding that your neighbours may do the same in the future. So perhaps it all comes down to being considerate by informing your neighbours even if you’ve already applied for permission from the municipal council. As the spokesperson from the Kajang Municipal Council poetically puts it:

And perhaps, it may also be a good idea to remind guests to be considerate when it comes to stuff like parking and noise...unless the entire neighbourhood is also at the party.