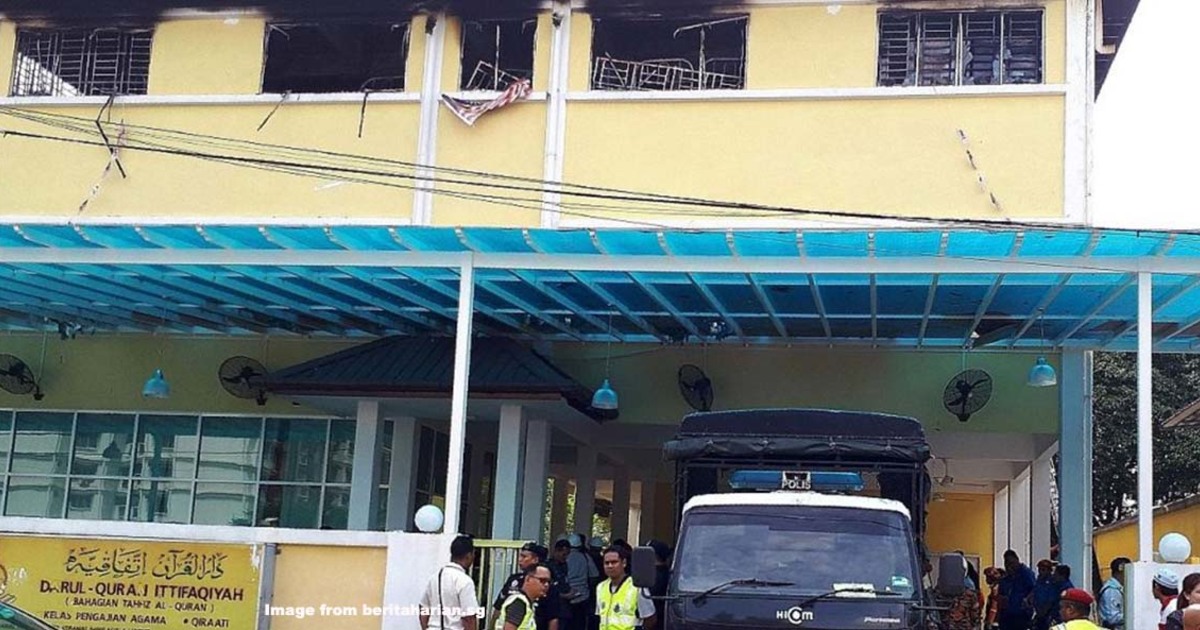 How does Malaysia ensure that its buildings are safe to use?

The recent fire at a local religious school located in Jalan Datuk Keramat has shocked the Malaysian public. Initial news reports have shown that the school was operated before it had its permit approved by the local authorities but a recent update stated that the fire was as a result of several youths setting fire to the school. However, local authorities stated that if the school had adhered to proper procedures, they would have been advised to use hinged grilles and not fixed ones in order to allow the students an avenue of escape in case of a fire.

Aside from the recent spike in news reports about deadly fires, including the one in Pudu’s famous Wai Sek Kai and the most recent fire in a religious school in Klang, there are also disasters caused by latent defects in the building or through more permanent forms of renovations – resulting in collapse or falling debris like what happened in Port Dickson when the ceiling of a hotel collapsed on their unsuspecting guests.

So with all that in mind, the question of the day is, how does Malaysia ensure that its buildings are safe to live /work in?

First of all, buildings in Malaysia MUST be certified before they can be used

The Certificate of Compliance and Completion (“CCC”) used to be known as the Certificate of Fitness for Occupation (“CFO”) but was replaced in 2007 in order to increase efficiency and reduce red tape bureaucracy. The major change that was implemented then is that the CCC would be issued by private bodies such as architects, engineers and building draftsmen instead of the local authority. In turn, these architects, engineers and building draftsmen are known as the principal submitting person (“PSP”) and they are subject to certain duties and responsibilities.

Given that this change was implemented ten years ago, this article would focus on the issuance of the CCC and not CFO. So, first off, what does the CCC even do?

The CCC is essentially meant to indicate that the building is now safe to be lived in and used. Depending on where you live, the issuance of the CCC would have to fulfil certain requirements imposed by the local authority. These requirements would be carried out by the PSP and typically include, among other things, submitting the building plans for approval, supervising the construction, ensuring compliance with the technical conditions imposed by the local authority.

“Before the issuance of a certificate of completion and compliance, it shall be the duties and responsibilities of the principal submitting person to-

(a) supervise the erection of the building to ensure that the erection is in conformity with the approved plans and the requirements of the provisions of this Act or any by-laws made thereunder;

(b) ensure that the building has been duly constructed and completed in conformity with the approved plans and the requirements of this Act or any by-laws made thereunder and that all technical conditions imposed by the local authority has been duly complied with; and

(c) ensure that the building is safe and fit for occupation.”

While Section 133 of the SDBA 1974 then tells us that there is an obligation on the state authority to pass by-laws (a by-law is a regulation made by the local authority) to regulate how CCCs should be passed, all states in Peninsular Malaysia have essentially adopted the same procedures in order to ensure that the issuance of CCC is streamlined in Malaysia. This is known as the Uniform Building By-Laws. Unfortunately, we were unable to find a copy of said by-laws online but a discussion on the relevant forms and procedures can be found on the Real Estate and Housing Developers’ Association Malaysia’s website.

What does a building need to get certified?

Aside from adhering to the building plans and submitting the proper plans, the CCC is only issued after six services have been confirmed. These services are:

The above shows that Malaysia has stringent requirements before a CCC can be issued and the building regarded as safe to live in and occupy. The penalties for failing to observe the proper guidelines for issuing the CCC are also severe in order to ensure that all the proper rules are complied with. For example, it is an offence to occupy a building before a CCC has been issued or if the CCC is issued without the proper forms. A full list of offences can be found in section 70(27) of the SDBA 1974, read with the 2007 amendments.

The local authority is also still involved in the process of issuance as they can conduct random checks on the building process and direct the PSP to withhold issuing the CCC if they notice any issues that need to be fixed.

“(20) No certificate of completion and compliance shall be issued except by a principal submitting person in accordance with the time, manner and procedure for the issuance thereof as prescribed by this Act or any by-laws made thereunder.

(a) a notice in writing, requiring compliance within the period specified in the notice, as the local authority thinks fit, in order that the noncompliance be rectified; and

(b) a directive in writing to withhold the issuance of the certificate of completion and compliance until such non-compliance has been rectified.”

If you are curious about how heavy the punishments are, section 127 tells us that there is a RM10,000 fine and an additional RM500 for every day that the non-compliance goes unfixed after getting convicted for general penalties. As for offences specifically related to the issuance of the CCC (section 70(27)), the fine can go up to RM250,000 or a maximum of ten years in prison.

My main worry is about fire – how does Malaysia ensure its building have proper fire escapes etc?

As mentioned above, the CCC is only issued after, among other okays, the Bomba has given their okay. Aside from the clearance from our Abang Bomba for the CCC, there is also a separate law governing the issuance of a fire certificate. This is where the Fire Services Act 1988 (“FSA 1988”) comes into play.

Section 28 of the FSA 1988 tells us that every premise (except single private dwellings or public religious worship areas) requires a fire certificate that has be renewed every year. All applications for a fire permit has to be made to the Director General of Fire and Rescue who will then carry out an inspection on the premises in order to make sure that there is adequate life safety, fire prevention, fire protection and fire-fighting facilities. What counts as adequate life safety, fire prevention and fire-fighting facilities are not specified in the Act as it depends on what premises are being inspected.

“(4) Where an application for a fire certificate has been duly made, the Director General shall cause to be carried out an inspection of the designated premises, and on being satisfied that there exists adequate life safety, fire prevention, fire protection and fire-fighting facilities…

(5) Where the Director General, after causing to be carried out under subsection (4) an inspection of the relevant premises, is not satisfied that there exists such adequate facilities in relation to the use of the designated premises as aforesaid, he shall, by notice served on the applicant, inform him of the requirements to be complied with within a specified time before the fire certificate can be issued to the applicant.”

Further to that, the Director General is allowed to conduct inspections at any time to ensure that the premises have not changed in a way that makes the facilities inadequate. Any major changes to the premises also has to be notified to the Director General. Any failure to give notice before starting renovations is considered an offence. So, for example if you have received the fire permit for your restaurant and decide to carry out some renovations, you need to inform the Director General of your plans before you start hacking away. These provisions can be found in section 32 of the FSA 1988.

It is also an offence to not have a fire certificate and the punishment for it is a RM5,000 fine or up to three years in prison. This is found in section 58:

“Any person guilty of an offence under this Act for which no penalty is expressly provided shall, on conviction, be liable to a fine not exceeding five thousand ringgit or to imprisonment for a term not exceeding three years or to both.”

The Director General also has the power to carry out inquiries into fires in order to determine how the fire started and what measures were taken in order to extinguish the fire. He will then make recommendations on how to prevent and combat fires better.

The Fire Prevention Council in Malaysia has recommended that homes should install smoke detectors and extinguishers and these are measures that you could easily adopt. Beyond that, the UK government has several handy guides on how to make your home safe from fires and you can read about it here.

As a brief overview, here are some general fire safety tips that you can practice in your home:

To avoid disasters which are caused by latent defects in the building or through more permanent forms of renovations, always be sure to ask for the CCC from your developer or landlord and ensure that they have properly applied for and maintained a fire permit.