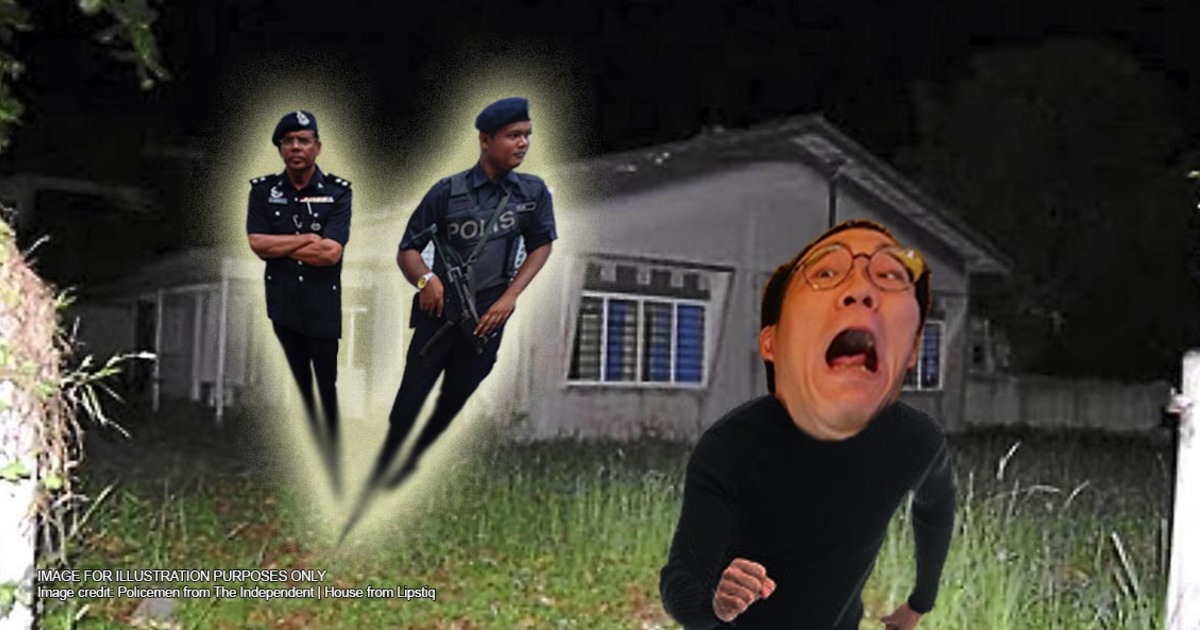 Ghostbusting in Malaysia can get you busted by the PDRM. Here's how to avoid it.

Talismans? Check. Flashlights? Check. Bamboo binoculars? Check. Running shoes? Check. Some kuih-muih and Milo in case you get hungry? Check. Everything you need, tucked safely in your backpack, for your Halloween ghost hunt.

But wait! Do you have a lawyer’s number in your speed dial – or better still, one waiting on standby? Because you may run into something much scarier (and real-er) than ghosts – the law.

While we may be familiar with the physical and supernatural challenges from the extremely thrilling practice that is ghost-hunting, many of us fail to remember that it can have legal repercussions too, depending on the circumstances under which it is carried out. Whether or not you actually believe in the supernatural, it seems to be a part of the Malaysian psyche regardless of race or religion; as can be exemplified by the notable number of supernatural events that have headlined our news in the past, as well as the recent news of a local “ghostbuster” who can conduct remote exorcisms for RM200 or less.

However, if you’re not one who subscribes to the belief that curiosity killed the cat and would like to get your adrenaline rush by going ghost-hunting this Halloween anyway, here are 5 steps to keep you safe and lessen your chances of getting into trouble with the law!

Step 1: Do not simply enter graveyards

Section 297 of the Penal Code – Trespassing on burial places, etc. (In part):

Whoever, … with the knowledge that the feelings of any person are likely to be wounded, or that the religion of any person is likely to be insulted thereby, commits any trespass in … any place set apart for the performance of funeral rites, or as a depository for the remains of the dead or offers any indignity to any human corpse or causes disturbance to any person assembled for the performance of funeral ceremonies, shall be punished…

If you thought of the most obvious place where you’d be likely to come across a ghost, a graveyard would probably be the first thing that comes to mind. Naturally, if you would like to mingle with the dead over servings of Halloween snacks while ghost-hunting, the best place to do so is probably where they rest.

Climbing over the fences of a graveyard that has been sealed away from the public or entering the vicinity of a burial ground once visiting hours have ended, however, can be considered as trespassing – an act that Section 297 of the Penal Code recognises as an offence against the law. Generally speaking, should you find that the gates of a graveyard are closed, do not attempt to open them or enter the area in question anyway – even if you may have relatives buried there.

If the thought of possibly having an extra “friend” follow you home afterwards doesn’t prevent you from trespassing on a graveyard, being escorted to the police station by a PDRM friend might.

WHAT CAN IT COST ME? Imprisonment for a maximum of 1 year, a fine, or both.

Step 2: Don’t simply claim that something is haunted

Section 505(b) of the Penal Code – Statements conducing to public mischief (In part):

Whoever makes, publishes or circulates any statement, rumour or report—

… with intent to cause, or which his likely to cause, fear or alarm to the public, or to any section of the public where by any person may be induced to commit an offence against the State or against the public tranquillity

You’ve just returned from your ghost hunt, and can’t wait to share your discoveries or theories with the world. You prop open your laptop, log in to all your social media accounts, and begin crafting statements about the supposedly haunted place that you just visited. Your fingers tremble with excitement, and your heart races as you recall the vivid details of your adventure.

Before you click on the ‘share’ option and publicise these statements though, we strongly urge you to think twice as, depending on what you posted, you may find yourself haunted by Penal Code violations such as Section 505(b) above, or under the Communications and Multimedia Act for spreading false news online. And if the place you’re referring to is privately owned (such as a hotel or someone’s house) you may find yourself being sued for defamation if your statements affect the public perception’s of a place or object.

[READ MORE: In Malaysia, shaming someone on social media can land you in jail]

Of course, you can try to argue your way out by supporting your claim that the place is indeed haunted… but good luck convincing the ghost(s) to show up in court. There are some places even the supernatural will avoid (j/k).

WHAT CAN IT COST ME? Imprisonment for a maximum of 2 years, a fine, or both.

Section 295 of the Penal Code – Injuring or defiling a place of worship with intent to insult the religion of any class (In part):

Whoever destroys, damages or defiles any place of worship, or any object held sacred by any class of persons, … with the knowledge that any class of persons is likely to consider such destruction, damage or defilement as an insult to their religion, shall be punished …

Let’s face it: it can be hard to talk about supernatural affairs without involving any kind of religious connotation. This is especially the case in largely religious and conservative communities like Malaysia, where spirituality is regarded as a sensitive issue and must be treaded on lightly.

As such, before you go ghost-hunting in an abandoned place of worship, in a burial ground that belongs to a specific religion, or just go around splashing bottles of holy water while brandishing a sacred object as a weapon of sorts while hunting, you might want to reconsider your choices.

If news of your ghost hunt and your usage of religious objects as a means of defense ends up offending anyone, Section 295 of the Penal Code could see you landing in a cauldron of double double toil and trouble, much to your dismay.

WHAT CAN IT COST ME? Imprisonment for a maximum of 2 years, a fine, or both.

Step 4: Do not trespass on houses

Whoever, without satisfactory excuse, wilfully trespasses in or upon any dwelling-house or premises, or upon any land attached thereto, … or upon any land belonging to the Government of Malaysia or of any State or appropriated to any public purpose, …

Trespassing on houses, their grounds, or any government-owned land – no matter how spooky or abandoned and unkempt it appears to be – is an offence against Section 22 of the Minor Offences Act 1955 in Malaysia. This translates to say that you should aways verify the ownership of a place which you would like to investigate, and better still, avoid going to places that you suspect might be owned (or get caught by) someone else.

The only time the law allows for such a trespass is when a “satisfactory excuse” is present, though we really can’t tell you for sure if hunting for supernatural entities falls under that umbrella.

(c) … any other instrument whatsoever for the production of noise or music in such a manner as to cause annoyance or inconvenience to occupants of any premises in the vicinity, …

We all know by now that anything involving supernatural elements usually involves a great deal of screaming and banging or (if you live in the world of Scooby Doo) slamming doors and hiding in trashcans.

After all, if seeing ghosts in just horror movies alone makes us scream ourselves till our throats are sore, imagine how much more compounded the noise you produce would be if you see a ghost float right past you while on your adventure.

If all this noise is produced while you are hunting in a village, a town, a piece of public property or on a public road in Malaysia between 12.00AM and 6.00AM however, and if someone gets annoyed enough to call the cops, you could be asking for more trouble that you bargained for – as Section 13(1)(c) of the Minor Offences Act 1955 elaborates.

There are scarier things than ghosts

Of course, this isn’t a complete list of laws you may end up violating in your ghost-hunting venture since there’s a chance the authorities might charge you under a different law depending on what you actually did.

But laws and possible demonic possession aside, we should also caution that many abandoned sites can be safety hazards – a part of the structure might collapse, you might step on discarded needles, or run into a secret drug operation that would have been successful if it wasn’t for you pesky kids. Either way, if you do plan on going regardless, do inform someone else (who’s not going) so that help can be summoned if you don’t return……... (Cue ominous music)