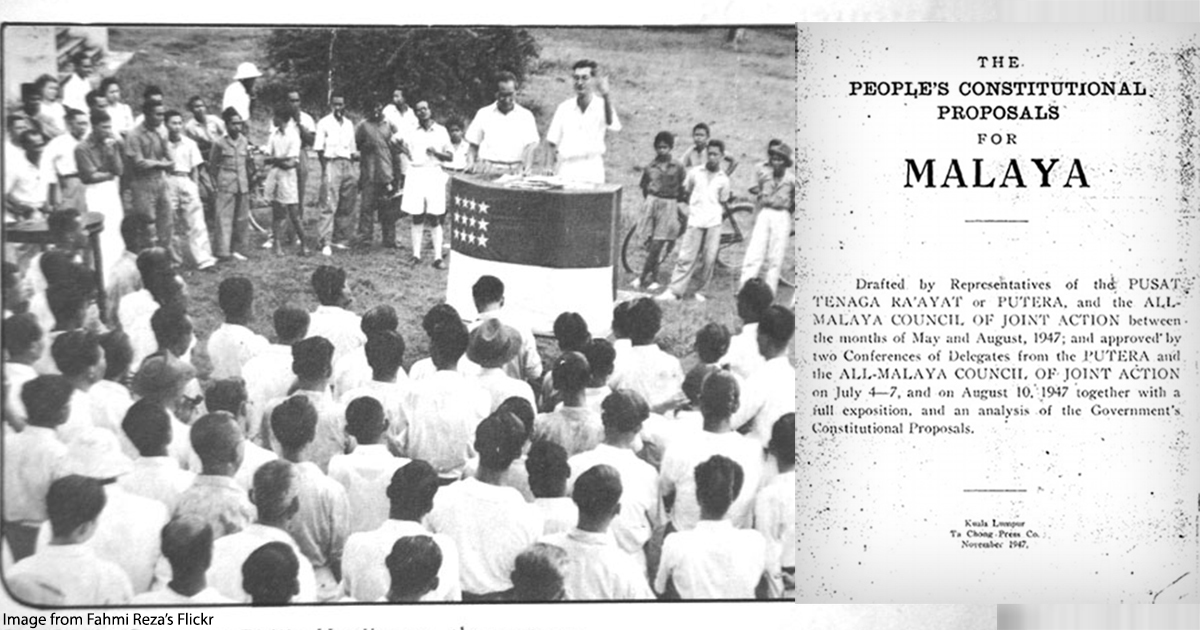 over 4 years ago Raymond Saw

Although they may not know the details, just about every Malaysian would know the significance of the Federal Constitution to the country. It’s quite literally the ‘supreme law of the Federation’ –  like, those words are legitimately one of the first few things written in it. Even though it was drafted over 6 decades ago, what was put into the that document maintains its relevance up till today, as even Parliament generally can’t pass any law that goes against the Federal Constitution, save for a few exceptions.

We take the Federal Constitution for granted as the ONLY document that forms the basis of all our laws and rights as citizens of Malaysia but did you know that...

There was a time when we could have adopted a different Constitution altogether?

Before we go into the differences between this would-be Constitution versus the Federal Constitution that was eventually used, we first have to understand the backstory of the political and social climate right after the Japanese Occupation, when the British resumed rule over Malaya

Back when the British were in charge...

“The worst thing about the Brits was that throughout colonial rule over Malaya, they took away all the resources and wealth of Malaya,” – Zainuddin Andika, PKMM member

After the end of World War 2 in 1945, the war had taken its toll on morale and the local population began to develop feelings of resentment against the British. Pro-independence propaganda started becoming popular reads, and the successful Indonesian independence revolution added fuel to the flame.

This culminated with the first post-war Malayan political party being formed: the Parti Kebangsaan Melayu Malaya (PKMM). By the end of the year, another pro-independence party, the Malayan Democratic Union (MDU) was formed in Singapore (which was still part of Malaya at the time).

In a bid to channel as much resources as they could from Malaya to fund their war efforts and subsequent recovery, the British had segregated the country along racial lines through divide and rule to prevent rebellion within the colony. With most of Europe decimated after the war, the British really wanted to keep hold of Malaya, and their solution in 1946 was a little project called Malayan Union.

As you might remember from school history classes, the unification of the Malay states and crown colonies was heavily frowned upon to say the least – with the Malayan people unhappy over issues like loss of Malay political power, citizenship for all, and continued British rule of Malaya. All this led to mass protests and the formation of a familiar-sounding political party.

In the midst of the anti-Malayan Union movement, the United Malays National Organisation (UMNO) was formed. Originally working together, a disagreement over how to stop the Malayan Union and the plan after that meant the PKMM and its allies worked separately from UMNO, as PKMM formed wanting full independence and were strongly supported by the poor and working classes.

The British had to choose one of them to work with as they didn’t want to see the conflict that happened in the Indonesian independence movement happen in Malaya. With UMNO being more British-friendly and more open to talks than the radical PKMM-led group, the British pulled up a chair with UMNO to discuss the end of the Malayan Union.

PKMM wasn’t happy with the UMNO/British constitution, so they made their own

While UMNO’s successful attempt at ending the Malayan Union were seen by some as a cause to celebrate, many others didn’t look at it the same way.

“Of course we organised another opposition to it… It was another attempt to restore the colonial governorship, but under a different name,” – Lim Kean Chye, co-founder of the Malayan Democratic Union

Reluctant to allow what they saw as Malayan Union 2.0, these groups formed a united front – encompassing the PKMM, MDU, and their allies – and was to be led by Tun Tan Cheng Lok (who later went on to form the MCA). This marked the birth of the All-Malaya Council of Joint Action (AMCJA), one the first all-race political alliances in Malaysia.

The AMCJA came up with their own constitutional proposal – the People’s Constitutional Proposals for Malaya. It argued for popularly elected governments, elections, freedoms of speech and movement, a road to self-governance and racial unity. The AMCJA then decided that a ‘hartal’ (general strike/protest) would be held on the 20th of Oct, 1947 to rally support for it; and it gained massive support.

The British were not impressed with the AMCJA’s actions to say the least. They passed the Societies’ Ordinance and used the Registrar of Societies to ban and cripple member groups of the AMCJA, which signaled the end of the AMCJA and the People’s Constitution. Eventually, UMNO and their allies took charge of the independence fight in the 1950s and, by 1957….well, you know the rest.

The question remains however….

How different was the AMCJA proposal from the Federal Constitution?

As we’re making a comparison between the AMCJA proposal and the Federal Constitution, it’s important to keep in mind that this cannot be an apples-to-apples comparison to say that one is better than the other, since the People’s Constitutional Proposals for Malaya (People’s Constitution) represented an ideological best-case scenario that was never realized; while the Federal Constitution was a result of negotiation and compromise with the British (as well as amendments that were made as the country progressed).

Suffice to say, we’re simply looking at this from a historical aspect, as we’ll never really know what version of the People’s Constitution would’ve been adopted (or what it’ll become) in an alternate timeline.

Article 160(2) of the Federal Constitution states that the term “Malay” means a person who professes the religion of Islam, habitually speaks the Malay language, conforms to Malay custom. This seems pretty understood now in the modern context.

SPECIAL POSITION OF THE MALAYS

Article 153 of the Federal Constitution dictates the ‘special position’ of the Malays. It provides affirmative action for Malays and for the natives in Sabah and Sarawak, stating ‘the Yang di-Pertuan Agong shall exercise his functions under this Constitution and federal law in such manner as may be necessary to safeguard the special position of the Malays and natives of any of the States of Sabah and Sarawak’.

It was also used to implement the New Economic Policy in 1971 following the May 13 riots. It’s a pretty complex issue, but click here for more quick information on Article 153 and the ‘social contract’.

While no such special position was in it, the People’s Constitution protected the Muslim religion and Malay customs as stated in Section 29. It stated that there would be Malay and Muslim only councils and associations formed to look after its concerns and recommend any suggestions to Parliament.

Perhaps intriguingly, the People’s Constitution also explicitly states the formation of a ‘Council of Races’ to prevent discrimination and promote racial unity, and to analyse every Bill passed by Parliament to ensure it is fair to all racial groups. The Council of Races was to be separated from the Parliament to prevent bias and consists of members of all major ethnic groups including European, Arabian and Jew, and Orang Asli.

RIGHTS AND FREEDOMS OF PEOPLE

Articles 5-13 of the Federal Constitution guarantee the following rights:

However, these liberties come with a few exceptions. For example, the Peaceful Assembly Act places conditions on what is considered legal assembly, or the Sedition Act of 1948 which can be arguably used to restrict freedom of speech. Beyond that, the Constitution also includes provisions that may restrict personal liberties in certain given situations, such as Article 149 of the Federal Constitution allows acts of Parliament to contravene the fundamental liberties promised in the Constitution during times of national crisis. Examples of these are the now-repealed Internal Securities Act (ISA), and the Security Offences (Special Measures) Act.

Assuming the People’s Constitution remained unchanged from its hypothetical adoption, the fundamental liberties are comparatively broader. Sections 6-18 of the People’s Constitution would’ve explicitly guaranteed equal rights of opportunities; equality before the law; gender equality; freedom of speech, publication, assembly, religion and movement; guarantee of fair trial; rights to property; minimum wage; care during old age; right to leisure and education; vacation for all workers; right to protest and; the right to petition the Council of Races for assistance. Phew.

There also appears to be no conditions on these liberties in the People’s Constitution.

A major shift in the federal-state relationship in the People’s Constitution is that there would be a stronger federal government. This version’s Parliament would consist of one MP for every 45,000 citizens. Something to note is that, in 1947, Malaya only had a population of 5 million, compared to today’s 30 million.This translates to over 600 MPs in present-day Malaysia (compared to the 222 which we currently have)!

We didn’t see any mention of state parliaments – we can only assume this would mean one major Parliament like the British, who also don’t have state governments. The Parliament then elects the Prime Minister and his cabinet, this time called the Federal Council.

Whether AMCJA or UMNO, the most important thing is that...

...we finally got our independence.

What’s important to keep in mind is that despite having differing opinions on what they wanted to achieve and how they set about achieving it; both groups had the same common cause of wanting the best for the people. And one common point that they started out with was the legal backbone of the country.

We weren’t kidding when we said that law permeates every aspect of a person’s day-to-day life.

Again, while it may be easy to brand one faction’s ideas as “better” or “worse”, we’ll never truly know the road (or, in this case, Constitution) not taken. Instead, take it as a interesting snippet of a slice of Malaysia’s history that is not often discussed or widely known.

Like they say, those who forget the pasta doomed to reheat it… wait no–