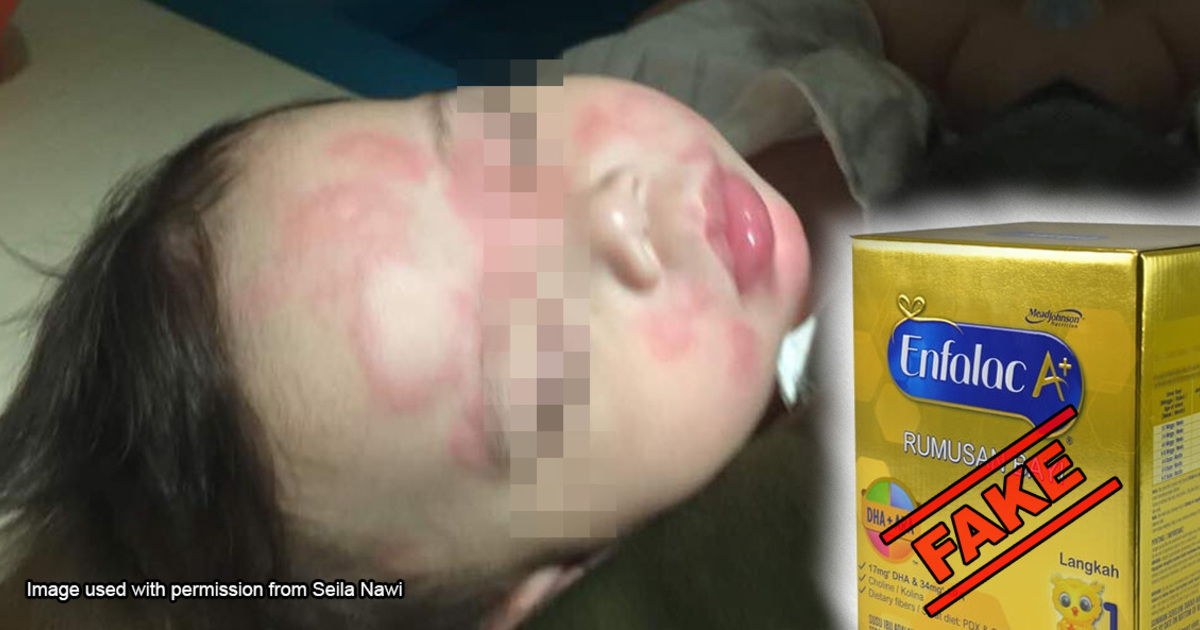 What can you do if you bought fake baby formula (or any other food) in Malaysia?

Malaysians are no strangers to the stories of fake foods. They wash up on our headlines every once in awhile and then disappear. We had that fake eggs scare back in 2014 where the eggs were made out of a whole bunch of things including benzoic acid which is commonly used to treat...eczema. The fake eggs were followed by fake Milo and now we have managed to make half of you wonder if the boiled eggs and Milo combo you have for breakfast every day is secretly killing you.

The list doesn’t end there. We even had reports of fake rice and pisang goreng fried with plastic bottles. The latest news and potentially one of the scarier fake foods is the one related to baby formula. Recently, officers from the Ministry of Domestic Trade, Cooperatives and Consumerism (KPDNKK) seized 210 boxes of infant formula which they believed to be fake from a raid in Johor.

Further to that, a worried mother has also taken to share the story of her baby who spent two weeks in a hospital, suffering from fever, vomiting, and bloody diarrhoea and she suspects that this is due to the fake Enfagrow A+ formula that she unwittingly fed him with. You can read her full story here.

Mead Johnson, the manufacturers of Enfagrow, has also responded to the recent bust by the KPDNKK by highlighting to consumers about the differences between genuine and fake products. You can read their statement here. The ministry of Domestic Trade, Cooperatives, and Consumerism have also stated that they will “name and shame” the manufacturers of fake baby formulas.

If you have fallen into the fake food trap and you are wondering if there are any laws against it, don’t worry. There are multiple actually. The first is...

The Ministry of Health plays a part in food safety

Specifically, it is the Food Safety and Quality Division of the Ministry of Health that plays a part in ensuring that every morsel that passes our lips is safe for consumption. They act to bust fake foods sold in the market through the Food Act 1983 (“FA 1983”).

[READ MORE: How do I know if medicine and cosmetics in Malaysia are safe to use?]

The first thing that the FA 1983 does is that it makes it an offence to prepare or sell food that has in it or on it, any substance that is injurious to health. This is found in section 13 of the Act:

Any person who prepares or sells any food that has in or upon it any substance which is poisonous, harmful or otherwise injurious to health commits an offence and shall be liable, on conviction, to a fine not exceeding one hundred thousand ringgit or to imprisonment for a term not exceeding ten years or to both.

As you can tell from the excerpt of the Act, anyone who sells food that has been mixed with poisonous or harmful materials can be fined up to RM100,000 or spend up to 10 years in jail or even both.

The best part is that this section does not just look at the immediate effect that the food may have on you, it also looks at the probable effect and the probable cumulative effect. This means that for someone to be guilty under this section, you don’t have to be immediately sick but the ingredients only need to be able to make you sick.

There is a high chance that all the fake rice and fake eggs that you have seen in the news would fall under this section as a lotttt of chemicals would have been added for it to mimic the look, taste, and feel of actual food.

Aside from that, if the food is not entirely fake, there is still an offence for adulterating food. Adulterating means to make something poorer in quality by adding in other substances. An example of this would be fake honey. Fake honey is actually mixed with a tiny bit of real honey in order for them to convince you that what you are buying is a real product. This offence is found in section 13B and there are different ways for food to be adulterated:

Anyone who is caught adulterating food in any of the ways mentioned above can be slapped with a maximum fine of RM20,000 and/or jail up to 5 years.

If you know of anyone who has been selling food that is poisonous to health or adulterating it, you can make a complaint through the Ministry’s online portal here or drop the Food Safety and Quality Division a call at this number 03 8883 3553.

However, realistically, many of us wouldn’t know what is in the food that we consume every day unless we fall sick immediately. But even then, we would usually assume that it is something to do with food poisoning so you might not be able to file a complaint with the Ministry of Health (unless you provide them with a sample of the food to be analysed). This is where the next part comes in.

The KPDNKK helps as well

Before we dive into what laws fall under this part, let’s talk about what does the KPDNKK do. KPDNKK stands for the Ministry of Domestic Trade, Cooperatives and Consumerism. From what we can glean off their website, they were established in 1990 and are responsible for protecting the interests and rights of Malaysian consumers.

[READ MORE: 5 ways you can (possibly) get around a no refund policy in Malaysia]

Now that we know what they do, let’s dive into our favourite part – the law (yay!).

The first piece of legislation to look at is the Trade Descriptions Act 2011 (“TDA 2011”). There are two ways an unscrupulous trader might be caught under this Act. The first is where they sell you products which they claim contains certain ingredients but actually contain harmful chemicals or additives. The second is where the trader sells you products that are marked as a famous brand but it is actually not an official product.

Before we list out the actual sections dealing with scenarios 1 and 2, let’s look at the general definition of what is a “trade description” under the TDA 2011. This is found in section 6 of the Act and there are 14 different aspects of trade descriptions which you can read up in the Act. Therefore, what amounts to a trade description is pretty wide and it can cover anything from descriptions for secondhand cars (history of previous ownership) to an expiration date.

Ali sets up a store selling honey. He sticks a label on the bottles listing down the ingredients as 90% pure honey and 10% water. However, Ali knows that the “honey” he is selling is actually just sugar water and colouring.

Let’s look at section 5 TDA 2011 for offences relating to scenario 1 given above. Section 5 makes it an offence for anyone to apply a false trade description to any goods that he sells or supplies:

(a) applies a false trade description to any goods;

(b) supplies or offers to supply any goods to which a false trade description is applied; or

(c) exposes for supply or has in his possession, custody or control for supply any goods to which a false trade description is applied...”

Anyone that is caught under this section can be fined up to RM100,000 and/or spend up to 3 years in jail for their first offence and for every subsequent offence, be punished with a fine up to RM250,000 and/or jail up to 5 years.

If the person who sold you the goods with false description actually operates under a company, then the penalties would be harsher. For the first offence, they can be fined up to RM250,000 and for every subsequent offence, the fine can go up to RM500,000.

Ali sets up a store selling honey that he claims is by Brand Bagus. However, Ali knows that his product is fake and was not actually manufactured by Brand Bagus.

For scenario 2, section 8 TDA 2011 has to be looked at. Specifically, section 8(2) states the following:

(a) applies a false trade description to any goods as if the goods were subject to any rights relating to registered trade mark;

(b) supplies or offers to supply any goods to which a false trade description is applied as if the goods were subject to any rights relating to registered trade mark; or

(c) exposes for supply or has in his possession, custody or control for supply any goods to which a false trade description is applied...”

In essence, section 8(2) makes it an offence for anyone to fix a trade description to any goods which they sell or supply, claiming to be from a certain registered trade mark. This means that in the case of the fake baby formula confiscated in Johor, the person caught by KPDNKK officers would have committed an offence under this section as he claims that the baby formula he is selling is made by Enfagrow when in actuality, he probably got it from a deep, dark, seedy underground place.

Section 8(3) also makes it an offence for anyone to sell/supply goods without the permission of the registered owner of the trade mark and the law presumes that anyone selling such goods without consent does so under a false trade description. This means that all those random online stores that claim to sell Apple products may be selling genuine products but because they are not official resellers, they might be guilty under this section.

It would be easier for you to make a complaint under the TDA 2011 to the KPDNKK as sometimes, fake products are pretty obvious. To drop KPDNKK a line, you can file your complaint here or ring them up on this number 1800 886 800.

At the end of the day, live by this golden rule…

If it sounds too good to be true, then it probably is

If it is not a sale and the food product you are looking at is usually sold at three times the price then...be really careful about the choice you are going to make. Aside from that, exercise a discretion in choosing where you choose to shop for groceries and get your meals from. It might be better to travel the extra mile and shop with a reputable shop than run the risk of consuming fake foods. Even if the owners of your local stores are honest and upright folks, they might be similarly duped by their suppliers.

At the end of the day, enforcement officers cannot be expected to be aware of infringements of the law without tip-offs from the public, so making a complaint is always a good start. Here are the relevant numbers for you to call for further information/lodge a complaint with if you missed it out in the article – 03 8883 3553 (Ministry of Health) and 1800 886 800 (KPDNKK).