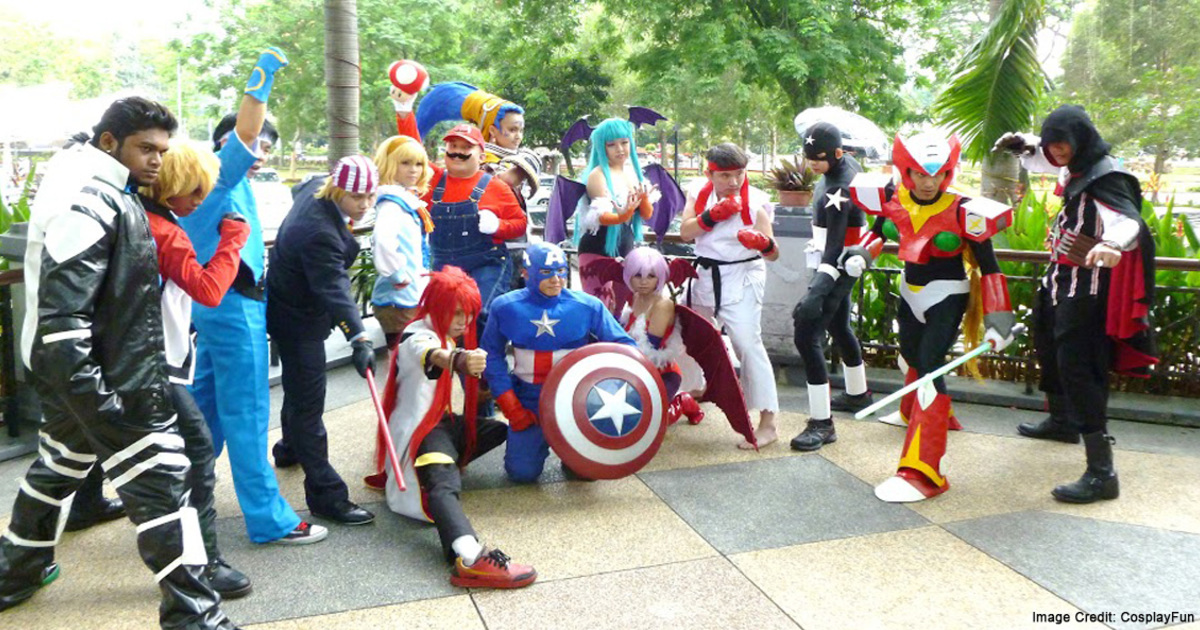 What laws do you need to obey when cosplaying in Malaysia?

With Animangaki-chan on 26th and 27th, and Animangaki set for mid August, anime fans are probably excited off their socks for the event. There are the games, anime, manga, merchandise, and of course - cosplay. In case you’re not familiar with what “cosplay” is, it’s a portmanteau of the words “costume” and “role play”, which involves fans dressing up as their favourite characters while role-playing as them as well.

Among the huge and sometimes strange variety of characters out there, a lot of them are fighters who carry big, dangerous weapons with them (which is one reason why they’re so cool in the first place). You’re not going to buy a real sword to cosplay as a knight character, and you wouldn’t get a real machine gun to act as a soldier character. But is it actually legal for cosplayers to carry fake weapons around?

This is just one of the many legal issues cosplayers could face from time to time. Here are a few laws about cosplaying you may not have known about.

Cosplayers are not going to get arrested for carrying a foam sword around, but Malaysian laws actually make it illegal to carry a foam gun around. Section 36 of the Arms Act 1960 says that any person who carries around an “imitation arm” without a license shall be liable to up to 1 year in prison and/or a fine up to RM5000. An “imitation arm” is defined under Section 2 of the Arms Act as:

“...anything which has the appearance or is intended to give the impression of being an arm, whether it is capable of discharging any shot, bullet, missile, noxious liquid, gas or other thing, or not”

Yep, your props don’t actually need to be capable of shooting bullets, flames, or gas to be considered an “imitation arm”. This includes non-lethal guns (like BB guns), and toy guns. Since the definition doesn’t specify, an “arm” is any lethal barreled weapon that can shoot any shot, bullet, missiles, noxious liquid, gas, or other things. This includes air guns and flamethrowers as well.

If you or your friends intend to cosplay characters who use guns - it’s best to take note that they don’t appear TOO real to avoid legal trouble.

Now that we’ve covered guns, what about fake swords and other fake bladed weapons? The Malaysian law that covers these weapons is the Corrosive and Explosive Substances and Offensive Weapons Act 1958 (CESOWA). The main thing to note is that when cosplaying characters who hold weapons, you’ll need to make sure that they are not capable of actually harming people. For example, popular costumes from the Assassin’s Creed franchise feature a hidden blade. A lot of cosplayers have successfully created their own versions, which can actually be dangerous if a sharp edge was attached to it. For safety reasons as well as legal ones, it’s best to attach a foam blade or other similar material that won’t cause much harm if an accident happens (like slicing your own finger off).

Cosplayers need to take caution even when using fake weapons - especially those that are made more realistically. Panic has actually been caused in places around the world where a katana-handle umbrella got mistaken as a real sword. It’s advisable to make sure that your weapon props clearly look like imitations when out in public, and if you get stopped by the police, cooperate fully with them to check your props out as safe.

While there’s no law being broken if you dress up as a maid or even a monster, there might be legal concerns if you want to dress up as a character from the police or armed forces. There’s actually been an incident of a guy dressing up as a policeman because according to him, it’s his hobby to imagine himself as a police officer. For the rest who want to play their favourite fictional cop, you have nothing to worry about - it’s only illegal if you dress up as a member of the PDRM.

According to Section 89 of the Police Act 1967, it’s illegal to have anything supplied to the police to perform their duties (like handcuffs and guns) or any medals and decorations of the police force without a valid reason. An interesting law in Section 89(c) is that you can play as a Malaysian police officer in a stage performance, but not for anything else - so you can’t do it for cosplay.

On another note, if you’ve ever wanted to cosplay a character that has a revealing outfit, there may be concerns whether or not you can get into trouble for indecent exposure. According to the law, how revealing you can go really depends on what society considers acceptable.

Section 509 of the Penal Code covers when you intend to insult a person’s modesty using obscene sounds, gestures, or objects. The punishment is up to 5 years in prison, and/or a fine. But while you’re in the clear from this law if you didn’t intend to shock others around you, there’s another law that you might still get arrested under. Section 294(a) of the Penal Code also makes it a crime to do any obscene act in a public place which could annoy others.

Section 294(a) of the Penal Code
“Whoever, to the annoyance of others—
(a) does any obscene act in any public place… shall be punished with imprisonment for a term which may extend to three months or with fine or with both.”

Under this law, you don’t need to intend to do it for it to be an offence. So if you are caught with a skimpy costume that you consider acceptable, you might still get into trouble if other people find your costume disturbing.

So if you’re into cosplaying characters with over-the-top revealing costumes, you may want to keep those to your private space, and also keep any photos you take private. A lot of cosplayers perform private photoshoots that they often distribute through prints and social media for publicity. If the photos are obscene, this could mean legal trouble for the distributors if they’re found out. Which brings us to...

If an obscene set of cosplay photos are put up for sale, or even if they are given out for free, it may get the publisher into trouble with Section 292 of the Penal Code.

Section 292 of the Penal Code - in part
“Whoever— (a) sells, lets to hire, distributes, publicly exhibits or in any manner puts into circulation, or for purposes of sale, hire, distribution, public exhibition or circulation makes, produces or has in his possession any obscene book, pamphlet, paper, drawing, painting, representation or figure or any other obscene object whatsoever...shall be punished with imprisonment for a term which may extend to three years or with fine or with both.”

Most cosplayers out there are probably not interested in publishing lewd pictures of themselves. However, if obscene pictures of you have been taken and put up without your permission, you can report the incident to the MCMC to have action taken. Section 233(1) of the Communications and Multimedia Act 1998 makes it an offence to publish obscene or indecent content online, as explained by the law:

“A person who— (a) by means of any network facilities or network service or applications service knowingly— (i) makes, creates or solicits; and (ii) initiates the transmission of, any comment, request, suggestion or other communication which is obscene, indecent, false, menacing or offensive in character with intent to annoy, abuse, threaten or harass another person... commits an offence.”

Here’s a flowchart of how to make your complaint prepared by the MCMC themselves.

4. Copyright issue… or not?

While selling non-obscene prints of your cosplay will not trigger any of the earlier laws. They might become a copyright issue. From a strictly legal point of view, you’re using someone else’s copyrighted character and costume without their permission.

I know what you’re probably thinking: big companies have better things to do than sue you for showing your fandom. And you’d be absolutely correct there. Unless you’re outright stealing someone’s character as your own, the law in Section 13(2A) of the Copyright Act 1987 will consider whether your costume is a “fair use” of the original - which means that it’s okay for your to use a small part of the original work. These factors include:

One exception might be popular cosplay personalities appearing at events and promotions. This is because they’re appearing as themselves, and not as “Wonder Woman”, or “Crash Bandicoot”.  For example, cosplay stars appear as themselves at a cosplay competition, which is different from an event promoting itself by saying “come meet Mickey Mouse”. This is illegal without permission from Disney, and they have sued an events company for cosplaying their characters at children’s birthday parties)

Basically, they’re popular because of themselves, and not the character they are cosplaying as - so it doesn’t really go against copyright.

Freedom to express yourself comes with a little responsibility

Preparing for a cosplay event can be really exciting for those who are into the hobby. But while we want the freedom to express ourselves, it comes with responsibilities to keep in line with the law. Risking copyright issues legal issues where you don’t have to is not the wisest thing to do, and it takes the enjoyment out of your hobby.

Cooperating with the authorities to make sure everything is okay can go a long way in keeping everyone safe at an event. The laws on prop weapons can help catch someone who might be hiding a real weapon under the guise of a costume. While there have been cases where a “katana” was spotted and it turned out to be an umbrella, the last thing we want is someone getting away with bringing a real weapon around, just because we assumed it was a fake.