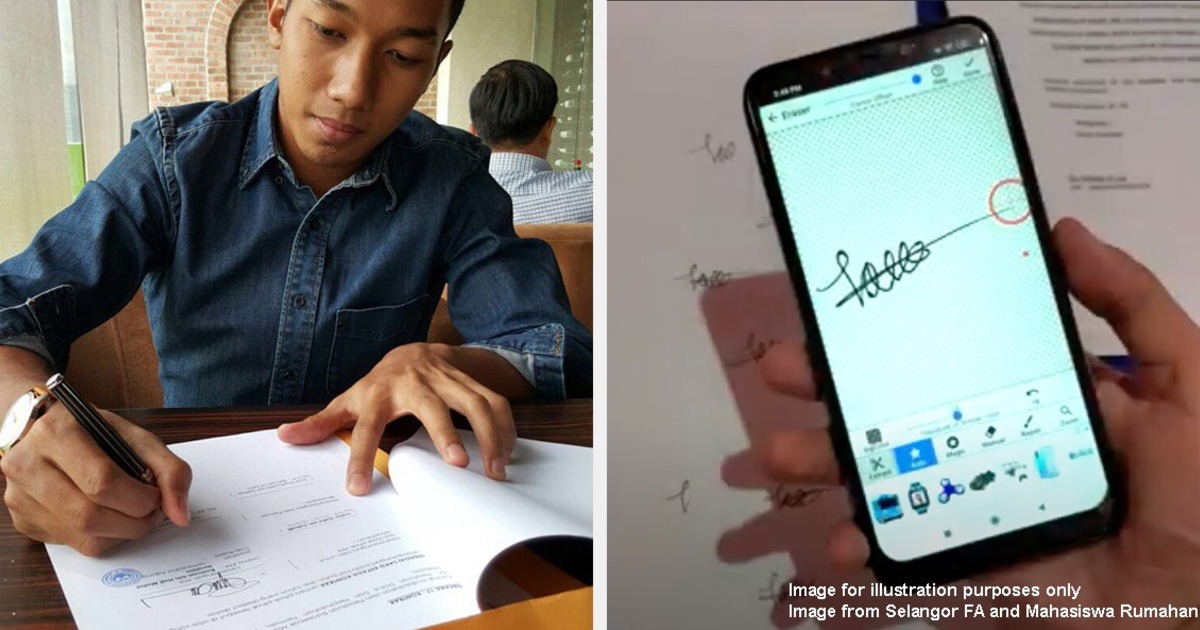 Are digital signatures legal in Malaysia?

But now in 2020, it’s starting to get more and more common. With the recent MCO, some of you might have started digitally signing some documents, because all meetings were limited to online spaces only. Even your abang delivery would sometimes ask you to sign on their phone, instead of doing so with a pen and paper. With how ubiquitous it is now, are digital signatures actually legit? Could you sign cheques or even contracts with it?

We looked into it, and we found out that the answer is yes...and no. But first, let’s look into what signatures really are under the law.

Signatures aren’t just a squiggly version of your name at the bottom of your contract. At its heart, the purpose of a signature is a way to prove that you have authorised or agreed to something. So for example, in a contract, signing your name means that you agree to follow the terms and conditions inside it. Similarly, when you sign your name when getting a delivery, you’re just confirming that you got the package from the courier.

But guess what: your signature isn’t even necessary for an agreement. That’s just one way for you to agree to a contract. You could even verbally agree with someone, and that is considered agreeing to a contract. Under Section 2(h) of the Contracts Act 1950:

“an agreement enforceable by law is a contract;”

This just means that if the agreement fulfils all the requirements under the Act, it becomes a contract, even if it's not put in writing. And there are a few basic ingredients for a contract, which is stated in Section 10(1) Contracts Act 1950:

“All agreements are contracts if they are made by the free consent of parties competent to contract, for a lawful consideration and with a lawful object, and are not hereby expressly declared to be void.”

So if you and another person agree to do something, without being coerced into it, that automatically makes it a contract. But do note that unwritten contracts aren’t binding for everything; we are just showing how your signature is just one way to agree to a contract. To read more on verbal agreements, you can read the link below.

So where does this put digital signatures? As we found out, they’re actually quite legit. In fact...

Digital signatures have been legit since ‘97

First, you’ll need to know the difference between a digital signature and an electronic signature. They might be used interchangeably, but there is actually a distinction between them.

Digital signatures would usually come with a digital certificate, which would verify the identify of the person signing it. An electronic signature, on the other hand, is quite varied. It is usually an image of a handwritten signature, created by scanning a signed document, but it can be almost anything created using a computer, which we’ll explain later.

Digital signatures have been legally recognised in Malaysia for more than 20 years. This was done in 1997 through the enactment of the Digital Signature Act. However, the recognition is for a specific technology to sign a document. Under the Act, a digital signature is defined as:

“signature which uses an asymmetric cryptosystem that is verified by reference to the public key listed in a valid certificate issued by a licensed certification authority”.

Basically, the only recognised digital signature is one that has a certificate to verify it. However, the key thing is that it’s recognised to be as legally binding as a handwritten signature.

“...any letter, character, number, sound or any other symbol or any combination thereof created in an electronic form adopted by a person as a signature…”

So nearly anything you want can be used as an electronic signature. It could be an image of your handwritten signature, or even a combination of letters like xXx_ThEd4RKn355WiTh1nME_xXx.

So we know that digital signatures are totally legit. But what about electronic signatures? We looked into it, and we found out that not only can it be legit, we also found that...

Even an SMS can be considered as an electronic signature

For an electronic signature to be considered legit, it will have to fulfil three requirements:

To know whether it’s reliable, it needs to meet another three conditions:

These three conditions might seem difficult to follow, because nowadays anyone can just photoshop someone’s signature. But a court case in 2014 demonstrated that determining the legitimacy of a signature isn’t that hard.

This was proven in the case of Yam Kong Seng & Anor v Yee Weng Kai (2014). One of the points in the case was whether agreeing to pay someone back through an SMS made it legally binding. The judge agreed that it was so, by saying that:

Under the ECA...where any law requires a signature of a person on a document, the requirement of the law is fulfilled if the document is in the form of an electronic message (the SMS in this case)...
For purposes of this appeal, the legal requirement for a signature was fulfilled as...the sender was adequately identified…
The telephone number of the respondent from which the SMS was sent confirmed that it came from the respondent as the registered owner of that telephone… There was no probability of successfully rebutting the respondent being the sender as the respondent himself admitted sending the message.

So even agreeing with someone through an SMS could be considered as an electronic signature. Their identity could also be verified, as it was sent from a specific person’s number.

But before you decide to throw out all your pens and sign everything digitally, do know that...

There are contracts that you need to sign with ink

So in a sense, you can sign most documents now using an electronic signature, or the more secure digital signature. But even if you can, the general advice is to sign certain documents the old fashioned way. For example, if it’s a complex contract that would involve a lot of your money, it’s probably best to read the printed out version, and sign it with pen on paper. At least, you’ll have your proof in black and white if anything happens, and also your peace of mind intact.