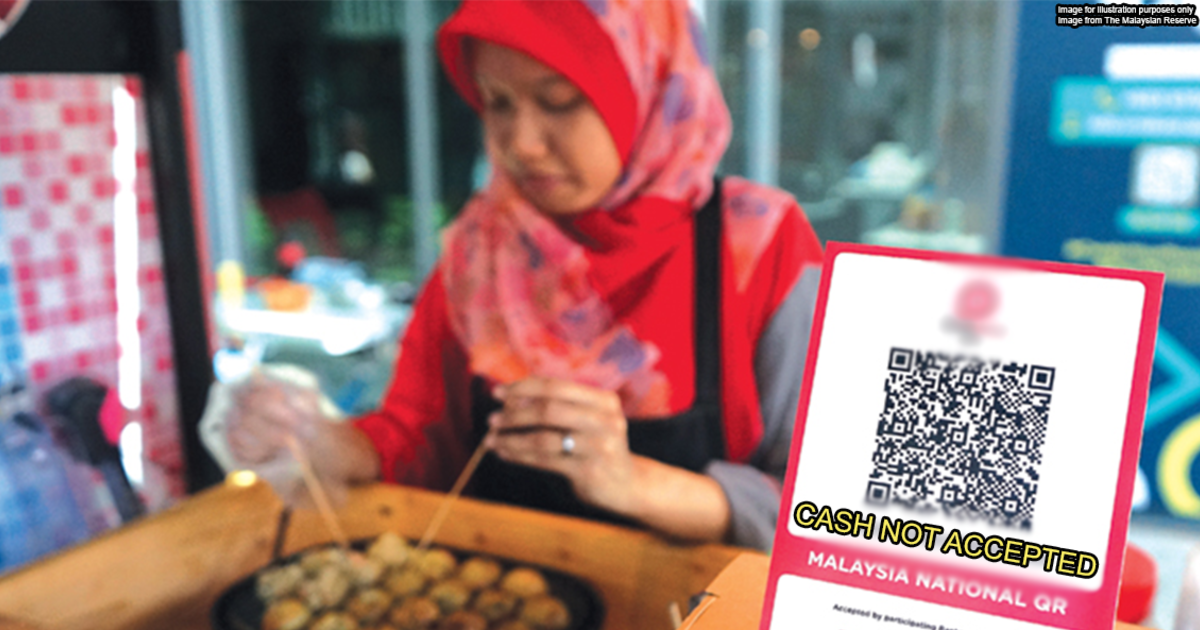 Sometimes, you might come across a sign that says ‘cash only’ displayed in shops. It can be a pretty common sight and it just means that you can only pay with cash in the shop, and not with a card, a QR pay code, or anything else.

But what if you saw a sign that said the exact opposite, or you went to a shop that ONLY accepted cashless payments?

One of our readers actually asked this question recently: Is it legal for a business to refuse to accept cash in Malaysia?

We spoke to lawyer Fahri Azzat to get some clarification on this and this is what he told us:

“They can't because it is legal tender.”

If you don’t know what legal tender is, it’s basically a legally recognised payment method that must be accepted if offered as payment. Under Section 24 of the Central Bank Act 1958, it says:

In short, it says that any bank notes that are issued by Bank Negara are legal tender, if the notes aren’t badly damaged. Coins that are also in good condition will be considered as legal tender—which means businesses should accept these methods of payment.

Do note that this Act has now been repealed—meaning it is no longer in effect. But it’s been taken over by a new Act, the Central Bank Act 2009, which in Section 100 says:

It basically means that notes and currency which were legal tender just before this new law came to be will continue to be legal tender. So on the whole, businesses cannot refuse cash...although, there may be one exception.

If the currency is badly damaged

In Section 24 of the old law we mentioned above, you might have noticed that it mentioned notes that “are not defaced” and coins that “have not been tampered with”. It pretty much means that if the money is torn, broken or badly damaged, it cannot considered to be legal tender—because it would no longer have value. So the only time a business may have a legitimate reason to refuse your cash is if it isn’t in good condition.

It’s been reported that many business owners throw away damaged cash or coins that they get. ATM machines don’t accept such money, and they may not be able to use the money anywhere else. But a lesser known fact is that if you ever get damaged money, you can actually exchange it with Bank Negara Malaysia (BNM) and get new money back. Following BNM’s policy on damaged money, you will:

You can read up on the full policy here.

What if you want to pay only in coins?

Like we mentioned earlier, coins are also legal tender that must be accepted—unless they’re damaged. And while you can pay in coins, there’s actually a limit to this.

The 1958 Act is no longer in effect like we said, but again, the 2009 Act does acknowledge some of the previous legal tender as legal tender that can still be used today. As you would already know, RM1 coins are no longer used, which means the maximum value of a coin that can be used as legal tender is 50 sen. So, if you try to pay for something that’s valued at RM15 with only coins, the shop can refuse to accept it—even if it is all legal tender.

To sum up, businesses actually can’t say no to cash even if they prefer other, simpler methods of payment. There may be legitimate reasons as to why they can’t take cash, such as not having enough change to give you, or that the item you’re buying is very high in value.

Unfortunately, there actually aren’t any laws against business owners who refuse to accept cash. So, even if they should accept it, no action can be taken against them if they refuse to do so.

However, with this pandemic around, it might be best for business owners to accept only cashless payment methods to help curb the spread of the virus. It might take some time for people to get used to it, but not having to deal with physical notes and coins may be a good idea, especially at a time like this.