Last January, a Malaysian girl who lived in Bandar Sunway shared her horrible experience regarding her housemate on Facebook and the post went viral. Her scary housemate kept all her rubbish and a dog in her room for a year and a half which as expected, resulted in a foul smell and cockroach infestation in the house…

Your story may not be as extreme as this, but, do you have this one annoying housemate that has gone too far in leaving his/ her mess everywhere and causing nuisance to other tenants? The kind of person who leaves piles of unwashed dishes on the sink everyday, never clean up the rubbish, plays loud musics in the midnight and not showering for a few weeks…. You may have tried to talk to him/her many times but still, nothing changes. And worse, the housemate is dead set on staying and refusing to move out.

So, what can you and other housemates do? Can all of you reach an agreement and kick this tenant out of the house?

No. Only a landlord can ‘kick’ a tenant out

A tenancy agreement is a contract signed between the tenants and the landlord. It covers all the rules that each party should follow during the term of tenancy. A tenancy agreement will normally include a clause explaining who can terminate the contract. In most situations, only a landlord can end a tenancy if the tenant fails to fulfill the duties under the contract.

Here are a few common clauses highlighting the duties of a tenant:

“Tenant is responsible to keep the Rental Property clean, sanitary, and in good condition”

So, if your housemate fails to be a responsible tenant, the landlord will have the right to end the tenancy and ask him/ her to move out. However, this right does’t extend to other tenants staying in the same property:

But, if you are a lead tenant and you rent part of the property to other sub-tenants, depending on your contract, you may have the right to terminate a sub-tenant’s agreement. So, unless there is a sub-tenancy contract that provides you the right to evict the tenant, you do not have the right to kick out any other tenants, however annoying the person is.

But what if your landlord doesn’t do anything or refuses to remove the housemate?

There are other ways to remove a terrible housemate

Now you know that you cannot legally kick your housemate out. However, here are a few things that you can do:

As mentioned, your landlord is the only person who can kick out a tenant (unless there’s a sub-tenancy agreement) so your options are quite limited if the landlord s uncooperative. In this situation, the best option you have is to make a complaint to the tenancy agent (if you went through one) and/or the management if you’re living in an apartment. But this is only to apply extra pressure to the landlord to take action – neither the agent nor the management can “force” him to take action.

However, if your landlord still refuses to end the tenancy agreement of the bad housemate, then you may need to request ending your tenancy earlier and move out.

2.  In extreme cases, you can call the police

If your housemate has turned hostile and you feel that your safety is at risk, you can call the police. For example, you can make a report when your housemate:

These are all criminal offences and can be charged in the court. So, if you housemate committed one of those, you can call 999 or go to the nearest police station and file a report. 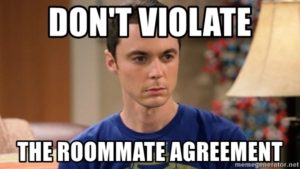 The best way to deal with a messy housemate is not to have one at the first place. However, not everyone is lucky enough to stay with their friends or afford a place to themselves. Most of the time, you need to take the risk to live with strangers.

To avoid future conflicts, you can sign a housemate agreement with other tenants in the same unit. It is basically an agreement which sets out the “house rules” (such as cleaning and garbage disposal, noise level, food and groceries). So, instead of discussing the rules orally, you can actually put the rules into writing and get all the tenants to sign it – making it a contract of sorts. While there’s a chance it may not be legally enforceable, it at least stands as proof that something was done to ensure that everyone in the house pulled their weight.

However, you have to make sure that everyone signs it, and that the “contract” is written clearly and fairly. Here are some tips to get you started:

[READ MORE: Is it safe to write your own contract in Malaysia (or sign one)?]

In Malaysia, if your neighbour's renovation encroaches on your compound, what can you do?

How do you legally transfer property to someone else in Malaysia?

How do you transfer car ownership to another person in Malaysia?

How do you legally transfer property to someone else in Malaysia?

If you're unlawfully detained in Msia, you can file a habeas corpus. But how does it work?