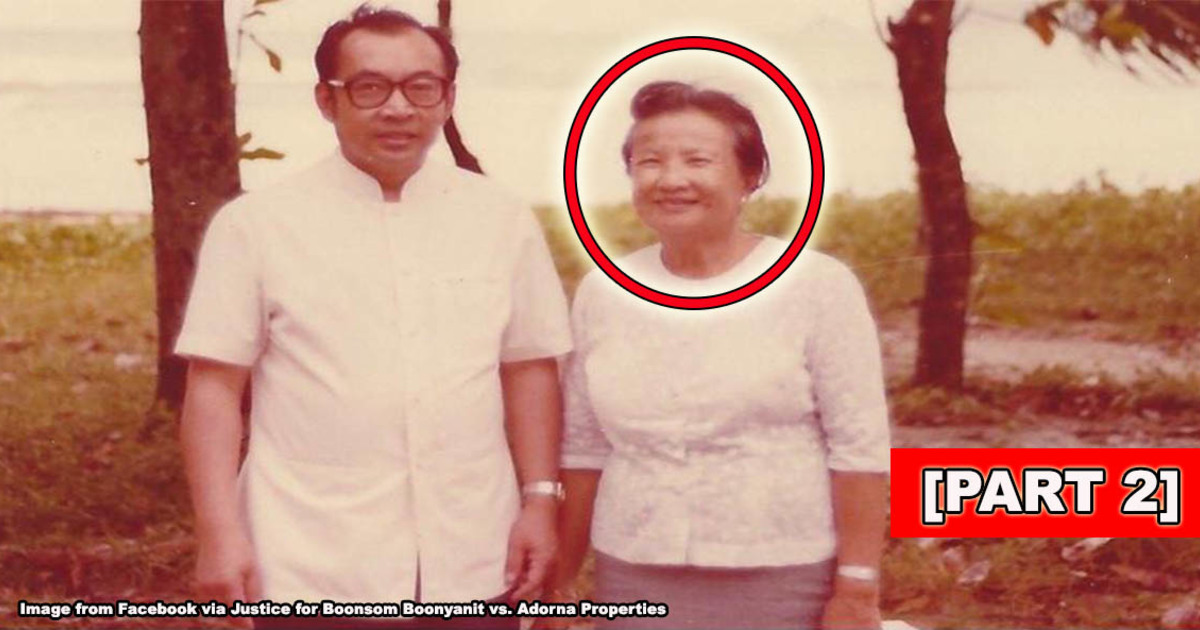 How did one Thai lady leave a sinkhole in Malaysian land law? [PART 2]

If you are here from part one of the story (which we recommend reading first), we laud you for your tenacity in tackling land law. Also, a word of advice, brace yourself for the technicalities that would hit you from every side. Without further ado, let’s dive into the Torrens System that we got from Australia.

Due to the fact that this is an accompanying article, there may be some overlaps with the main article.

The Torrens System is all about registration

The system that Malaysian land law operates under is known as the Torrens System. This system was created by Sir Robert Torrens wayyyyy back in the early 1800s when land speculation in South Australia boomed and prompted Sir Robert, the then Premier of South Australia to come up with a new system of land ownership to replace the deficiencies of the common law method of land registration.

In its barest form, there are two key concepts that the Torrens System operates by:

The land register is basically a database of all the lands in Malaysia that records who are the registered owners and any legal interests (such as charges, caveats etc.) which are on the land.

For the purposes of understanding the fraud in Madam Boonsom’s case, we will focus on land transfers. Section 215 of the NLC 1965 provides that any land transfer would be done via Form 14A and the title of the land would pass to the transferee upon successful registration of the transfer. Those of you who have dealt with property transfers before would be familiar with this process, from signing the 14A to presenting it to the land office which registers it. During this process, you would also be required to surrender your original land title to the land office who would amend the current title to reflect the new changes and return it back to you.

This means that while the title should reflect whatever is on the register, the register is still the final point of reference in case of any disputes.

“(1) The transfer under this Act of any alienated land shall be effected by an instrument in Form 14A.

(2) The title of the transferor shall pass to and vest in the transferee upon the registration of any such transfer, together also with the benefit of any registered interests then enjoyed with the land.”

The registration of land then ties in with the second concept of indefeasibility of title.

Under section 340 of the NLC 1965, the title of anyone who is registered as the owner of the land will be indefeasible. This means that as long as your name/interest appears on the land register, you would be protected from any third party claims to the land which do not appear on the register would be defeated by your title, with the help of the register.

This was the crux of Adorna’s argument during the court case (which we will tackle in the next point), that because their name was on the land title and in the register, they have an indefeasible title to the land that trumped Madam Boonsom’s claim. They also claimed that they were not aware of any fraud and was a bona fide (genuine) purchaser for value (the RM1.8million paid) for the land (hang on to this little nugget here).

At this point, you are probably thinking that Adorna (whether they knew of the fraud or not), seems to have the law on their side because indefeasible title, amiright?

Section 340(2) tells us when there is no indefeasibility of title in three scenarios: (i) where there is fraud/misrepresentation to which the party/agent is party/privy to, (ii) registration was obtained through forgery/by means of an insufficient/void instrument and (iii) where the title was unlawfully acquired by someone purporting to exercise power given through the law.

For the purposes of this article, we would focus on the issue of forgery. Basically, section 340(2) tells us that when there is forgery, the person who receives the property will not get an indefeasible title. He will, instead, get a defeasible title. A defeasible title means that the forged instrument was unable to confer any rights, interests or title to the acquirer of the property.

Now that we have explained this part, we will dive into what the courts said in detail.

The court case(s) took many turns

In the High Court, the judge decided that Adorna Properties had an indefeasible title to the land.

But what about the issue of fraud?

(a) it shall be liable to be set aside in the hands of any person or body to whom it may subsequently be transferred; and

(b) any interest subsequently granted thereout shall be liable to be set aside in the hands of any person or body in whom it is for the time being vested:

Provided that nothing in this sub-section shall affect any title or interest acquired by any purchaser in good faith and for valuable consideration, or by any person or body claiming through or under such a purchaser.”

Some of you eagle eyes out there might notice that this section gives the person who receives the land indefeasible title if he is a purchaser in good faith and for valuable consideration.

Remember how Adorna argued that they were unaware of the fraud? Yeahhhh...the judge in the High Court took that proviso in section 340(3) and applied it to section 340(2) to decide that even where there is forgery, a bona fide purchaser’s title would remain indefeasible.

”...I hold that even had I found that forgery had been proved beyond reasonable doubt, the defendant (Adorna) is nevertheless protected and has acquired indefeasible title over the said properties by virtue of the proviso in s. 340(3)...” – Vincent Ng J, High Court (Penang) on the 29th of April 1995

This means that Madam Boonsom effectively lost her property and all lawyers in Malaysia groaned because the judge’s decision basically means that no one’s property is ever safe.

But this plucky lady appealed her case and went on to the Court of Appeal. This is what happened there.

In the Court of Appeal, the judges decided that Madam Boonsom is...the rightful owner and the property has to be returned to her (yay!).

This is where it gets even more technical, so please bear with us. The reasoning of the Court of Appeal is that there are actually two kinds of indefeasibility. The first kind is immediate indefeasibility and the second kind is deferred indefeasibility.

In a very simplistic manner, immediate indefeasibility means that immediate purchaser gets an undisputed title and stands strong against all other claims. An example of this would be:

A obtains a land via fraud and sells it to B. C, the true owner of the land, discovers the fraud and sues for the return of the land.

Even though fraud can be proven, B still keeps the land because of the concept of immediate indefeasibility of title.

A obtains a land via fraud and sells it to B. C, the true owner of the land, discovers the fraud and sues for the return of the land.

B then has to return the property to C because his indefeasibility is deferred.

An example of how deferred indefeasibility works is:

A obtains a land via fraud and sells it to B. B then sells that land to D. C, the true owner of the land, discovers the fraud after the sale to D.

C sues for the return of the land. However, because the land has been transferred from B to D (subsequent transfer), D now has the protection of an indefeasible title.

C will not be able to get his land back.

The decision of the judges in the Court of Appeal was made with reference to a lot of other cases and academic papers which we won’t delve into but we will summarise it for you folks out there.

The thrust of the Court of Appeal’s decision is basically that Malaysia’s land law system confers deferred indefeasibility. This means that Madam Boonsom is entitled to her land because Adorna (even if they are bona fide), had received the property through fraud and therefore according to section 340(2), they do not have the protection of indefeasibility.

But wait. What about the proviso in section 340(3) that you know, protects bona fide purchasers? Well, section 340(3) does protect bona fide parties but...only in a subsequent transfer. Remember that example we gave about how D is able to retain his property? Yeah. That is how deferred indefeasibility works.

”The section should be read as making defeasible the title of a proprietor who gets unto the register by means of one or more of the methods specified in the second subsection. However, if such a registered proprietor were to dispose of the land to a third party who, in good faith, pays the purchase price, then, the latter, as well as those who came on the register after him, take title free of any taint.” – Gopal Sri Ram JCA, Court of Appeal on the 17th of March 1997

This was how Madam Boonsom got her property back...did she?

Adorna appealed this decision to the Federal Court who said that…

The is what the Federal Court said:

“We therefore, agree with the High Court Judge that, on the facts of this case, even if the instrument of transfer was forged, the respondent nevertheless obtained an indefeasible title to the said lands.” – Eusoff Chin CJ, Federal Court on the 13th of December 2000

The Federal Court agreed with the High Court and Adorna got an indefeasible title. This means that Madam Boonsom lost her property.

But as you know from reading Part One of this article, the law was changed and here’s the legalese side of that story.

The courts found a ‘blatant error’ in Madam Boonsom’s case

Well, the facts were not entirely the same as Madam Boonsom’s case but the crux of the case is the same. In other words, it also relates to the issue of fraud and indefeasibility of title.

Therefore, when Tan Ying Hong lost at both the High Court and the Court of Appeal, he appealed to the Federal Court, asking one simple question,

In essence, the question that was posed to the Federal Court in Tan Ying Hong’s case was whether the law established in Madam Boonsom’s case had to be followed.

I am legally obligated to restate the law since the error committed in Adorna Properties is so obvious and blatant.” – Zaki Azmi CJ, Federal Court on the 21st of January 2010

The judges overturned the established principle in Madam Boonsom’s case and closed the gap in the law by setting out that the proviso found in section 340(3) can only be applied within the confines of section 340(3). In other words, it means that the concept of indefeasibility in Malaysia is one of deferred indefeasibility.

This means that landowners in Malaysia can rejoice as they now have protection against the loss of their lands through fraud.

Folks, if you have stayed with us this far, our heart goes out to you and we recommend hot tea for the raging headache.