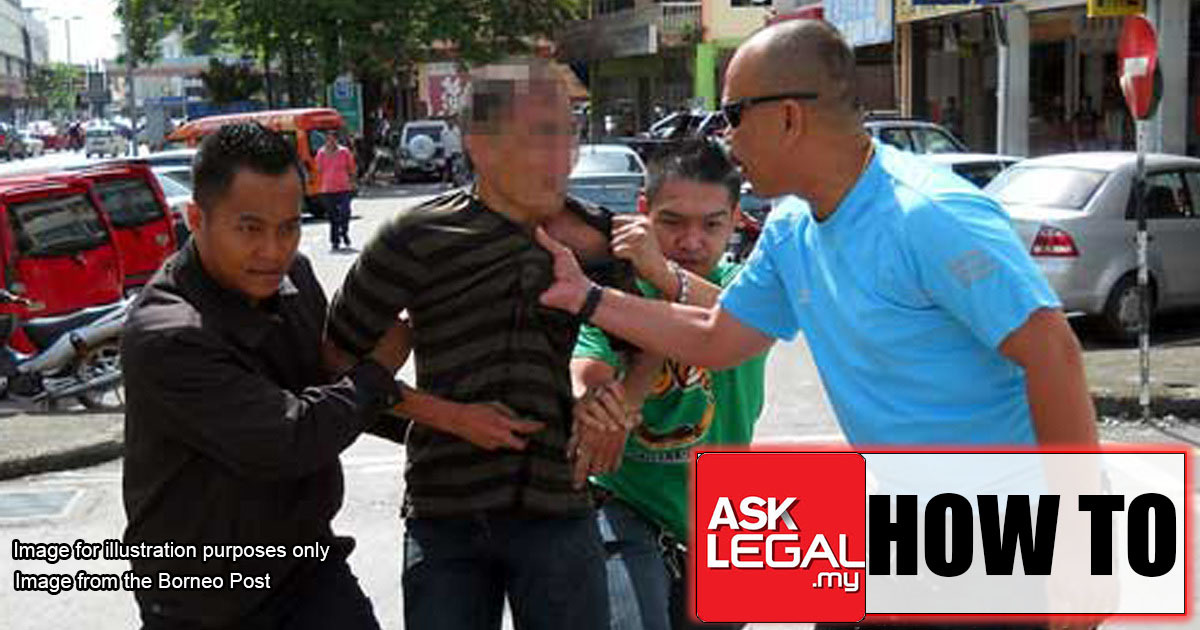 How to perform a citizen's arrest in Malaysia

NOTE: The staff at Asklegal volunteered to pose for the images shown in this article. We needed a reason to get off our swivel chairs.

We are sure you have imagined the heroic moment where you see a pretty lady getting her handbag snatched, and you Usain Bolt towards the thief and catch him. But, in the DC hero-like moment when you apprehend the thief, did you know you may have performed a citizen’s arrest?

With a citizen’s arrest you have to make sure you are following the legal procedures properly, if not you may be breaking some laws. So here’s a simplified reference to how a Citizen’s Arrest can be performed according to Section 27 of the Criminal Procedure Code. If you would like to read a more detailed explanation on the laws surrounding citizen’s arrest you can do so here.

Step 1: Don’t try to be Batman unless necessary

This is less of a step and more of a precautionary measure, because you are not a hunky billionaire who can fight crime with an expensive kevlar suit and a Batmobile. If you are like the writer of this article, you probably have on a discounted H&M t-shirt and takes the LRT to get around. If that’s the case, don’t try to be a hero unless it’s extremely necessary. Trying to arrest a criminal can be dangerous and it can result in you getting hurt and possibly trouble with the law. But, if you really have to make an arrest….

Step 2: Make sure the crime is committed “in your view”

You will only have the powers to arrest, if the crime is committed “in your view”. So, if we were to take things literally it would mean that the crime should have been perceived with your senses of sight (ie, you saw the thief trying to take the bag from the woman). However in the Malaysian legal system, it could also mean a crime happened “in your opinion” (ie, you didn’t see the thief taking the bag, but you seem him running away with a bag  and a woman shouting “CURI!”).

Step 3: Make sure the crime committed is serious

What me mean by a serious offence is whether the crime is seizable or unbailable. To demystify these legal jargons, we will go at it one by one. For unbailable offences, it actually means a crime where you can’t get bail. For seizable offences, they are basically crimes where the minimum punishment is at least 3 years. If you want a more fleshed out explanation of seizable offences and examples of such offences, you can check out our article here.

In the mean time, for the purposes of this article you can arrest a person if you see him committing a murder or stealing a bag. But, don’t tackle someone to the ground for littering and start shouting “YOU ARE UNDER ARREST!”

According to Section 15 of the Criminal Procedure Code, this is how you should perform an arrest:

If you don’t have handcuffs, you can actually get some rope to tie him up. However, this doesn’t mean you can simply practice your karate moves on him unnecessarily. You can only use those moves in self-defence, if he tries to fight you or hurt others. But even that you have do it proportionately – ie, you probably can’t kill him or put him in a coma. The force you use must be proportionate to the threat he poses.

[READ MORE: Why do some Malaysians get arrested for killing robbers in self defense?]

Step 5: Bring the criminal to the police station or police officer

After you pat yourself on the back for succeeding in a realistic game of “police and thief”, you obviously have to do something because you can’t keep the thief to yourself. According to the law, you have to hand him over to a policeman or a police station. We understand, that the thief might be reluctant to tag along with you while you actively search for a policeman or head over to a police station. Fret not, because all you need to do is call the police and tell them what happened –they will come to you and re-arrest him.