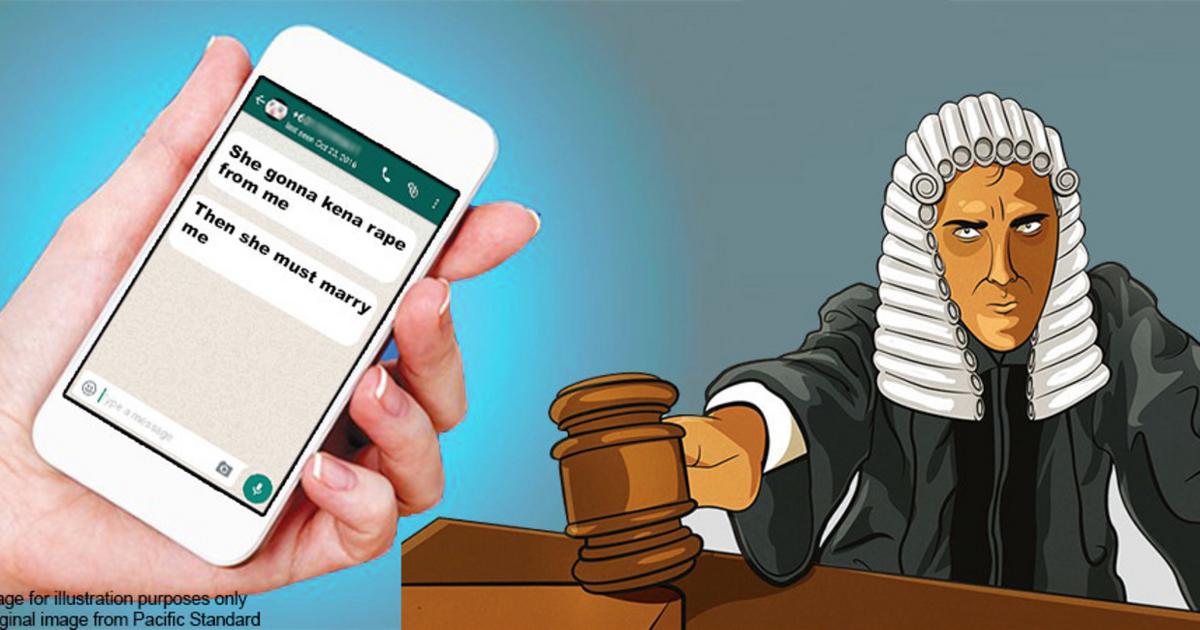 Getting rape or death threats on Whatsapp... Will Malaysian laws protect you?

Note: This article was originally written in May 2017.

Considering that instant messaging has become the primary form of communication for many Malaysians, it probably wouldn't be too surprising to learn that applications such as WhatApp, Facebook Messenger, or WeChat have also been misused in a multitude of ways - from sharing false rumors to cyberbullying.

Unfortunately, while Malaysia has laws such as the Communications and Multimedia Act 1998 and the recently-passed Sexual Offences Against Children Bill that provide certain guidelines on what can and cannot be done online, the majority of problems related to cyberspace remain a legal grey area; although it has to be mentioned that this is a problem faced by governments around the world.

The speed in which technology has progressed in recent years has proved problematic for governments, especially in areas where the law is concerned since the law is "at least five years behind technology" according to Andrea Matwyshyn, a US professor studying the interaction between law and technology.

In this article, we will be focusing on chat applications - specifically on what you can do if someone sends you a harassing or threatening private message or, in a recent incident that happened in a local college, if you find out people have been making crude remarks about you in a chat group.

Let's start with something a little more straightforward...

You can make a police report or sue the person 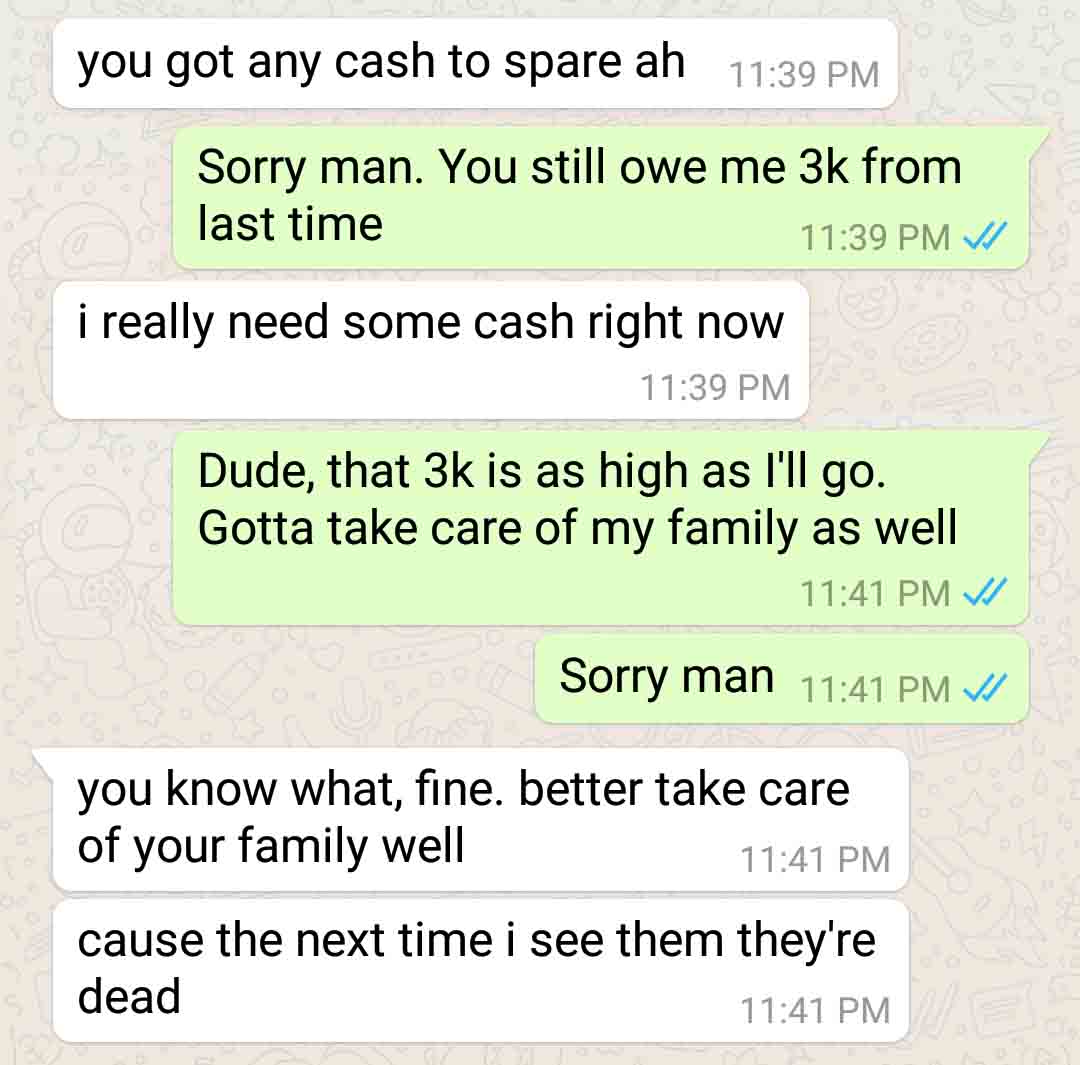 For the most part, we usually understand that comments such as "I'mma kill you" or "Sila meninggal" aren't meant to be taken literally, but there might be certain situations in which you might find these statements to be a little too real (as in amounting to an actual threat). In such a situation, you may be able to lodge a report to the police and/or the Malaysian Communications and Multimedia Commission (MCMC) where it will be investigated as a crime. Depending on the outcome of the investigation, the person who sent you the messages may face a charge under Section 211 or 233 of the Communications and Multimedia Act (CMA). For example:

Section 211(1) of the Communication and Multimedia Act - Prohibition on provision of offensive content:

It is also worth noting that certain "regular" Malaysian laws may still apply even if they weren't specifically written for the digital space like the CMA. For instance, a person who shares a seditious message on Whatsapp or on Facebook can be concurrently charged under the CMA and the Sedition Act, such as in the case of Khalid Ismath over his social media posts regarding the Johor royal family.

Similarly, if your friend sends you a Whatsapp message threatening to kill your family and burn your house down if you don't lend him money, he may be charged twice - once under the CMA and another under section 503 of the Penal Code for criminal intimidation. But again, every situation and circumstance is different from a case-to-case basis.

If the police can't establish a valid case to press criminal charges and/or if you prefer to seek personal compensation, you can also take up a lawsuit against the person who sent you the message under tort law. You can read more about the specifics of tort law here, but the basic explanation is that if you can sue someone if your experience fulfills the 'ingredients' of a particular tort. So for example, if someone sends you unsolicited nude images and sexually explicit messages despite you asking them to stop, you may be able to sue them under the tort of harassment. Torts can be rather complicated, so it would be best to seek advice from a qualified lawyer first.

But what if the messages weren't sent to you directly? 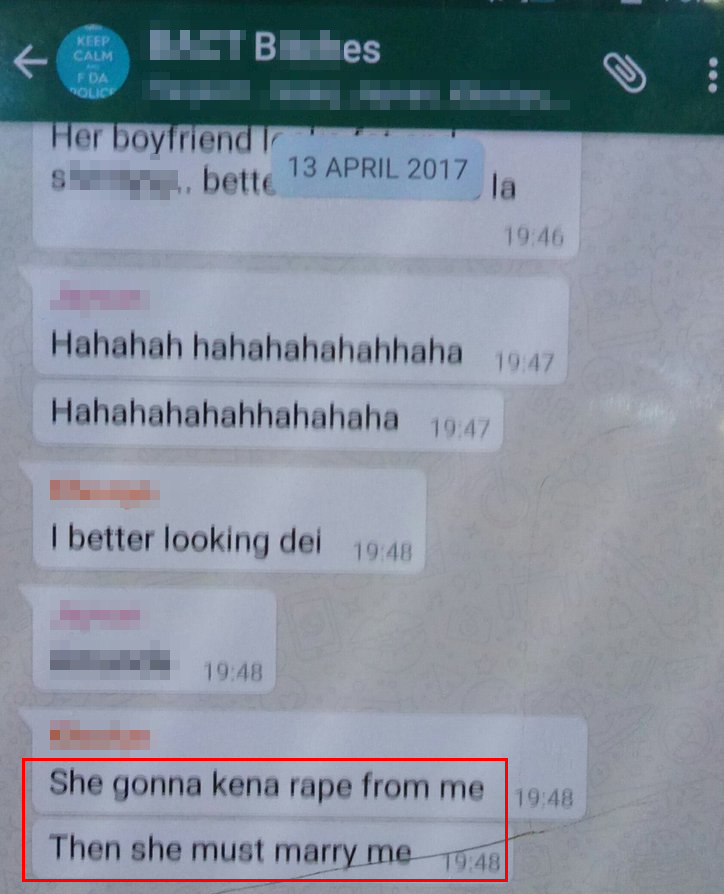 While the examples listed in the point above were for direct interactions (i.e. the messages were sent to you directly), the situation gets complicated when layers of separation are involved. For instance:

As previously mentioned, the law does not always address the specific aspects of how modern technology is used so we spoke to two criminal lawyers - Fahri Azzat from Fahri & Co and Joshua Tay from AmerBON Advocates - for their legal opinions. We should mention that because the law is still developing in this area, some of their views may slightly differ and should not be considered legal advice.

A lot of these issues have to do with privacy and free speech, as Fahri pointed out:

"Before SMS/Chats came into existence, we had to say things to each other in person and whomever was not part of it did not hear it except when it's reported by someone else or though hearsay. Now that they're recorded (by text or voice clip), the exact conversation can be forwarded and read by others.

I recall an incident about an American millionaire whose wife recorded and broadcast some racist remarks he made while in his own home. I had mixed feelings about that incident - sure racism is bad but surely I'm entitled to say whatever I like in the comfort of my own home to family or friends. He had no intention to broadcast it but was skewered for it. Fair? Just? It's so hard to tell what exactly that is these days." - Fahri Azzat, in email interview with ASKLEGAL. 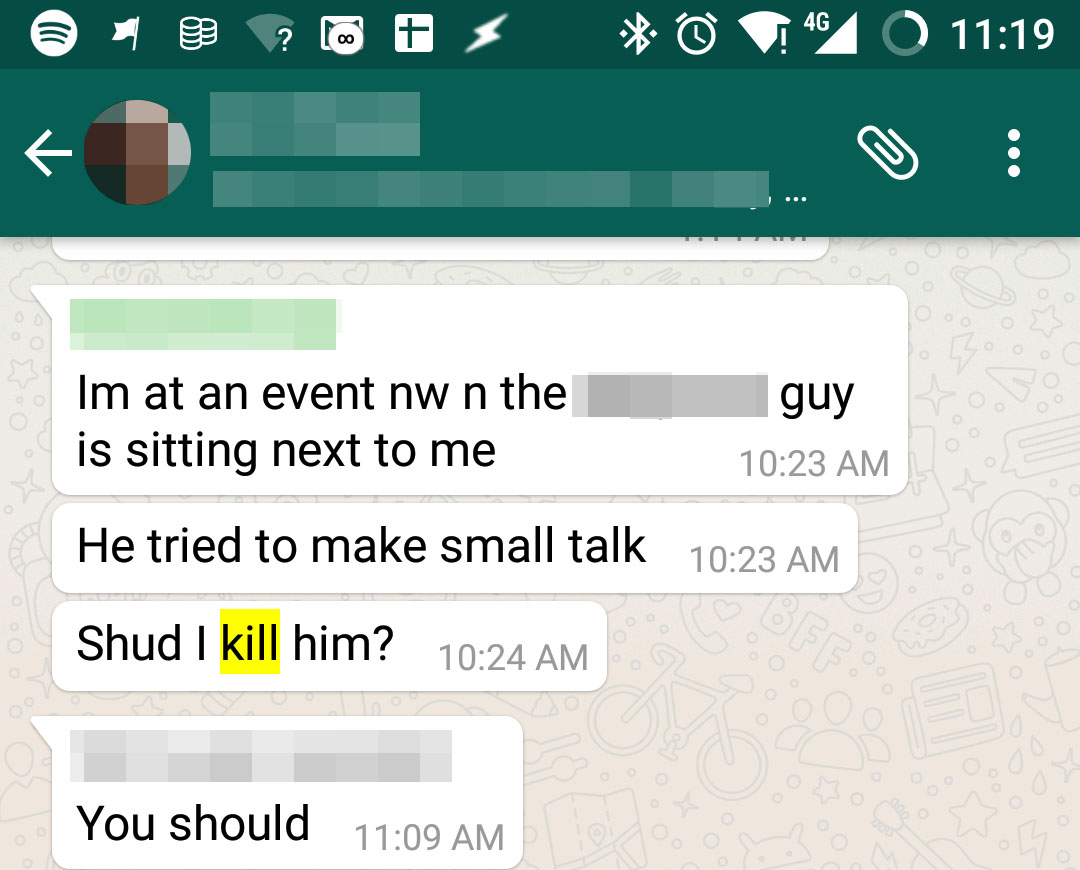 So in an instance where a lewd statement was made about you in a chat group that you weren't a part of, Fahri and Joshua are of the opinion that there may not be a legal basis for a criminal or civil suit depending on the context of the statement. For example, if the statement happened in a group set up for the purpose of discussing girls (which you're not a part of) and was obviously a joke, it may not be seen as an offense under Section 233 of the CMA, which requires an element of intention:

Section 233(1) of the Communications and Multimedia Act (in part):

"...any comment, request, suggestion or other communication which is obscene, indecent, false, menacing or offensive in character with intent to annoy, abuse, threaten or harass another person..."

Conversely, if you were to share screenshots of this conversation on social media, the people in the chat group are also unlikely to be able to take legal action against you or the person who shared the conversation for breach of privacy. However, they may be able to take up a case if the statement isn't true or is defamatory.

"The right to privacy in Malaysia is still in its infancy. There is no express provision guaranteeing you this right, but it can be argued as being part of the right to life. I don't think any action can be taken [by the people in the chat] unless it's not true or defamatory." - Joshua Tay, in email interview with ASKLEGAL.

"No, I don't think so. There was no undertaking to keep the conversation private although it may have been implicit but even then it was probably not articulated" - Fahri Azzat.

Regardless, it may be best to make a police report

While it's sometimes hard to judge a person's intent through text, if you feel sufficiently threatened by a message, you should make a police report regardless. This would enable an investigation (if any) and the police report may also serve as proof should you decide to take the matter to court.

Here are some things to consider beforehand:

1) Having proof of the conversation (like screenshots) would make it easier for the police to kickstart an investigation.

2) Posting the conversation on social media may help raise awareness and, to a certain degree, the social shaming that ensues may prove far more effective than any potential legal action. However, do take into account the context of the conversation and take steps to verify that the authenticity of the conversation (if the screenshots were sent by someone else) to ensure that you don't end up being sued for defamation instead. You may also want to blur out names and/or pictures.

3) Seek advice from a trained lawyer if needed. In cases of sexual harassment, organizations such as the Women's Aid Organisation or the All Women's Action Society (AWAM) can also advise you further.