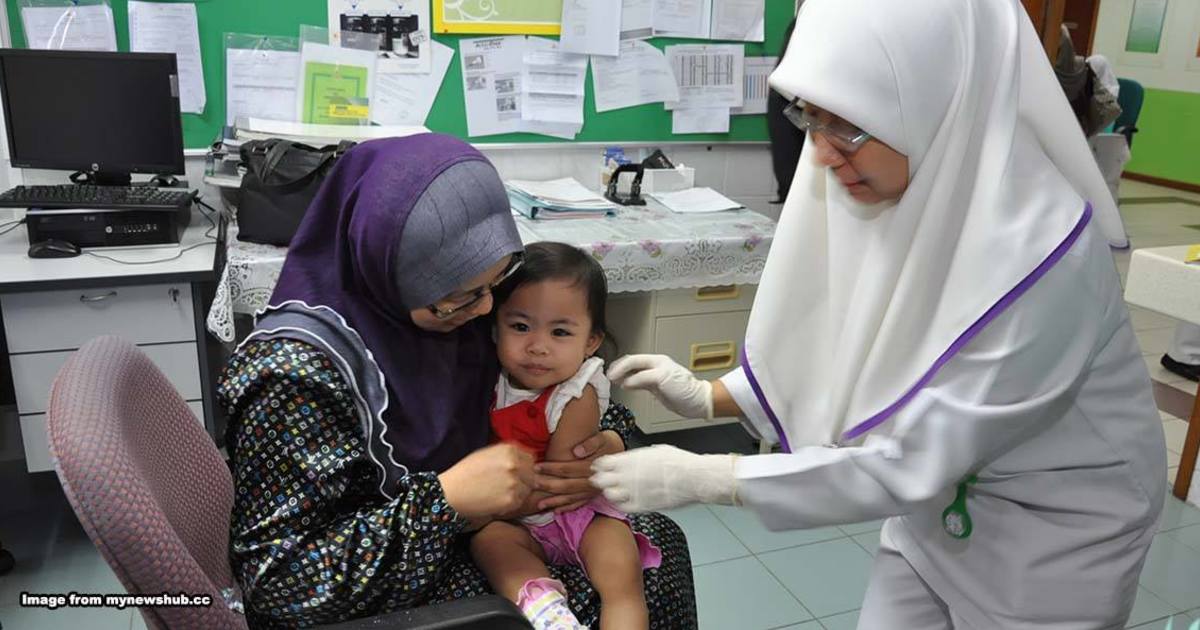 Are you legally required to vaccinate your child in Malaysia?

It’s a wonderful time we live in (relatively speaking). Life expectancy is at an all time high (the global average is 71.5 years), technology, healthcare, and less people dying violently worldwide. Part of the longer average life expectancy can be attributed to the invention of vaccines. Diseases like smallpox, polio, tuberculosis, measles, and others are either eradicated or controlled to the point where very, very few people suffer from them.

On the flip side of the coin, there’s anti-vaxxers. Some of the premises of anti-vaccination include arguments that vaccines are “unnatural”, or that specific vaccines or ingredients in them are harmful such as thiomersal, which has been blamed for causing autism in children. While the anti-vax movement is probably most associated with western countries such as the US, where a lady in Michigan was jailed for refusing to vaccinate her child, it’s beginning to gain popularity here in Malaysia as well.

This movement’s popularity is evidenced by Malaysian anti-vax groups on social media, as well as a growing number of parents who refuse to allow their children to be vaccinated.

But wait, will these parents be at risk of being put in jail like that lady from Michigan? Are you required to vaccinate your child in Malaysia?

No, you’re not legally required to vaccinate your children

As odd as it sounds, Malaysia does not have any legislation on mandatory vaccinations for children. By comparison, all 50 states in the US have laws requiring children to be vaccinated against diphtheria, tetanus and pertussis; polio, measles and rubella, Parents can, and do, refuse to have their children vaccinated, and there are no legal repercussions.

The usual practice in schools is that the students are that they are automatically included in the vaccination programs. Remember when we were in school, lining up in the school hall (or wherever you did it), waiting to get a jab in your arm so you can grab the free Milo and biscuits after? We never really thought about it because everyone gets the vaccinations, but our parents could’ve opted us out of the program if they wished.

Last year there were talks of making vaccinations legally required by the Health Ministry. So far that remains to be seen, but the Women, Family and Community Development Ministry has indicated that not vaccinating a child could be an offence under the Child Act 2001:

“If parents refuse to vaccinate their children and this results in the spread of infections and endangering the children’s lives, it can be considered as a form of child neglect.” – Women, Family and Community Development Ministry, as quoted by The Star

Specifically, they think that section 31 of the Child Act 2001 can be extended to include not vaccinating your child. Here’s what section 31(1)(a) says:

Any person who, being a person having the care of a child— (a) abuses, neglects, abandons or exposes the child in a manner likely to cause him physical or emotional injury or causes or permits him to be so abused, neglected, abandoned or exposed;

It is quite plausible that neglecting or choosing not to vaccinate your child might fall under this section. Many lawyers think that this is quite a stretch, since the Act doesn’t specify vaccinations and no case has been brought to court so far.

Aside from legal issues, what’s the worst that can happen, right?

As it turns out, things can get quite hairy. Medical experts linked a diphtheria outbreak last year on the anti-vax movement, along with a rise in other vaccinate-preventable diseases such as measles and tetanus.

Very briefly, diphtheria is an infection caused by the bacterium Corynbacterium diphtheriae. Signs and symptoms vary from mild to severe. At first, you’ll develop a fever that’s above 38 °C, chills, skin turning blue, fatigue, sore throat, difficulty swallowing or breathing, among others. Within 2 to 3 days, your healthy respiratory tissues may be destroyed, and a layer of dead tissue can build in your throat or nose. This all can lead to death. In children ages 5 and below, and adults over 40, the fatality rate may be as high as 20%.

It’s also notable that until the outbreak, diphtheria was more or less eradicated in Malaysia.

With that background laid down, let’s take a look at this scenario:

Imagine you have a child. It’s a nice cool evening, and you take little Bobby down to the neighbourhood playground for some fun. Oh, hey, there’s other kids and parents at the playground! Bobby can make some friends and you can make some small talk with the adults.

Skip to a week later, Bobby’s in bed with a high fever. You’re worried, you take him to the ER at the nearest hospital and after examining your child, the doctor tells you Bobby has diphtheria! The doctor also says that he probably got it from a kid that wasn’t vaccinated.  It’s not hard to put two and two together, and you eventually find out that one of the kids at the playground.

This scenario is something that’s an increasing cause of concern for other governments where the anti-vax movement is a lot stronger. In the light of a rise in the number of anti-vaxxers, there have been cases where small outbreaks of infections that are supposedly under control have occurred. An outbreak of measles infections in late 2014, which started in Disneyland in Orlando, was directly linked to children who weren’t vaccinated. This is a real concern as these outbreaks become more numerous.

This has led to debates in the US about whether or not children who aren’t vaccinated have the right to attend school. Some anti-vaxxers are thinking of leaving California for other states that allow parents to opt out from vaccinating their children. In Europe, the French government is taking a stance on this issue as well by making it so that parents are obliged by law to vaccinate their children.

This also leads to potential legal issues such as who should be responsible if someone dies after contracting a disease from an unvaccinated child. As there are no laws regarding mandatory vaccination for children, there’s no way of telling whether or not the parents can be charged with a criminal act. Suing under tort of negligence is a problematic as well, since there’s no precedent for these cases here.

Should you vaccinate your children?

While it should be noted that many scientific arguments against vaccinations have been debunked, such as being linked to causing autism or containing high levels of mercury.

This doctor who wished to remain anonymous gives us his thoughts on the current state of vaccinations in our country.

“When I worked in HUKM, cases where children who missed their vaccinations or were not vaccinated at all were quite common. It is quite a shock, because most parents in Kuala Lumpur are well informed and educated. Now that I’m in Sabah, it’s even worse, since the percentage of educated people there are lower. Many children are born in their houses, and hence are not vaccinated at all since birth. It is never to late to catch up on your vaccinations. All you have to do is visit a government hospital.”
Part of how vaccines work is tied to a concept called herd immunity. This means that if a large enough percentage of the population is immune from a certain infection, this provides a measure of protection for people who are not immune or not vaccinated. If more people choose not to vaccinate themselves or their children, this form of protection becomes compromised.” – Anonymous Doctor, in interview with ASKLEGAL

Long story short, unless the laws are changed, you have the choice whether to vaccinate your children or not. The most important thing is look at the evidence that is presented to you, and make an informed decision.