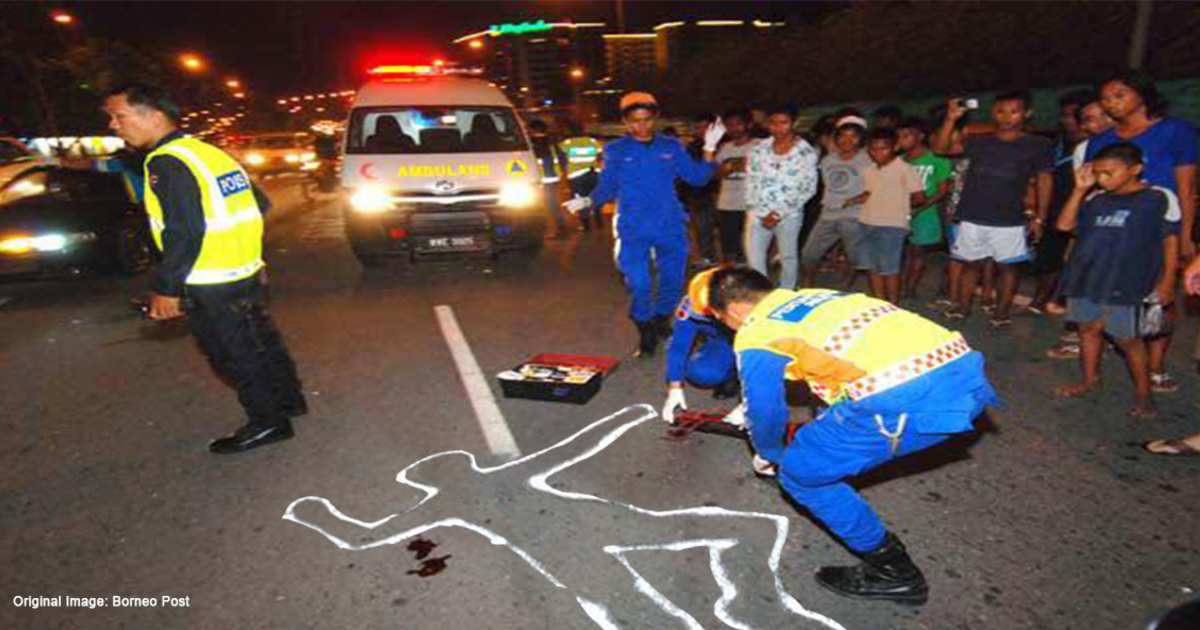 What is an unnatural death and why does the PDRM get involved?

Dying is not a fun affair (although there’s the word ‘fun’ in ‘funeral’). On top of dealing with the death itself, there’s a bunch of formalities to sort out. This article is meant to be a rough guide to the things that you have to do if someone close to you dies. It’s fairly straightforward, as you’ll find out, but what about unnatural deaths? What happens if someone dies in an accident, or gets murdered, or commits suicide? This is where things get slightly complicated.

The information below is probably not exhaustive, so please don’t kill (ha haaaaa) the author if anything’s missing.

What do you do in a case of a natural death?

A natural death is where a person dies due to interruption or failure of bodily functions from ageing or disease, and the police (usually) won’t investigate the death. Let’s talk about what to do in case of a natural death (knock on wood).

What about unnatural deaths? Is there a separate thing to do?

In cases of unnatural deaths, section 329(1) of the Criminal Procedure Code gives us situations where the police will do so:

Basically they will have to come investigate if they receive information that the death is unnatural. That includes suspected homicides, suicides, sudden deaths, accidents, and when the death is in mysterious circumstances. An autopsy will be done by a Government Medical Officer to find out the cause of death. The police will also report this death to the Magistrate who is in charge of the area where the body was found. Who is a Magistrate? A magistrate is a judge who presides over the Magistrate’s Court, a court that is relatively low in the hierarchy of courts.

It shall not be necessary for the Magistrate to hold any inquiry under this Chapter or to make any report under subsection (1) if any criminal proceedings have been instituted against any person in respect of any act connected with the death of the deceased or such hurt as caused the death.

A full inquiry is not required if any criminal proceedings has started against any person who is connected to the death in question. This is when the police arrests a suspect that, for example, is related to the murder of the victim.

Section 333(1) states that it is possible that if the Magistrate is satisfied with the cause of death without holding an inquiry (suspicious death), after which he needs to report to the Public Prosecutor. He/she needs to include reasons for being satisfied with the cause of death and pass all the documents and materials related to the case to the Public Prosecutor as well.

What does a death inquiry involve?

Death inquiries are technically hearings, but they’re not like your average trials. The process is less formal, and it may not necessarily be held in a courtroom. An inquiry of death should start A.S.A.P after the death is reported to the Magistrate. There should also be minimal numbers of postponements in between inquiry sessions. The place where the inquiry held is usually open to public but the Magistrate in charge may exclude a certain person or multiple people, at any stage of the inquiry, on grounds of public policy or to speed up the inquiries.

They are also not criminal trials; there is no accused party and no complainant, and there is no defense team. There are only ‘interested parties’ such as the next of or personal representative of the deceased person, a representative of an enforcement organization (for example: the police) or government department appointed to attend the inquiry, or anyone who the Magistrate deems to be a properly interested person.

A lawyer representing an interested party may be present during the proceedings but he/she is not there to defend anyone, merely to function as an observer. The counsel does not have a right to speak unless expressly permitted by the Magistrate. The normal rules of a trial and rules of evidence do not apply in inquiries of death.

At the conclusion of the inquiry the Magistrate should have found out the cause of death. After hearing the evidence of witness regarding the circumstances surrounding the death and considering all the documents produced during the inquiry, a Magistrate may conclude that the death was due to, among other things:

The Magistrate can come to the verdict that the deceased committed suicide, if it is apparent enough. Here’s a curious thing: the Magistrate may deliver an open verdict, a.k.a. “I’m not sure myself, dude,”.

Section 341A of the Criminal Procedure Code provides that the verdict in an inquiry of death is subject to revision by the High Court.

To reiterate, a death inquiry doesn’t happen for every death that’s found. It is usually only operates when there is a unnatural or suspicious death that the Magistrate wants to try to find how the death happened. The most important thing is take from this article is if a death occurs in the house, even if natural, call the police as soon as possible. They will guide you on the procedural side of things.