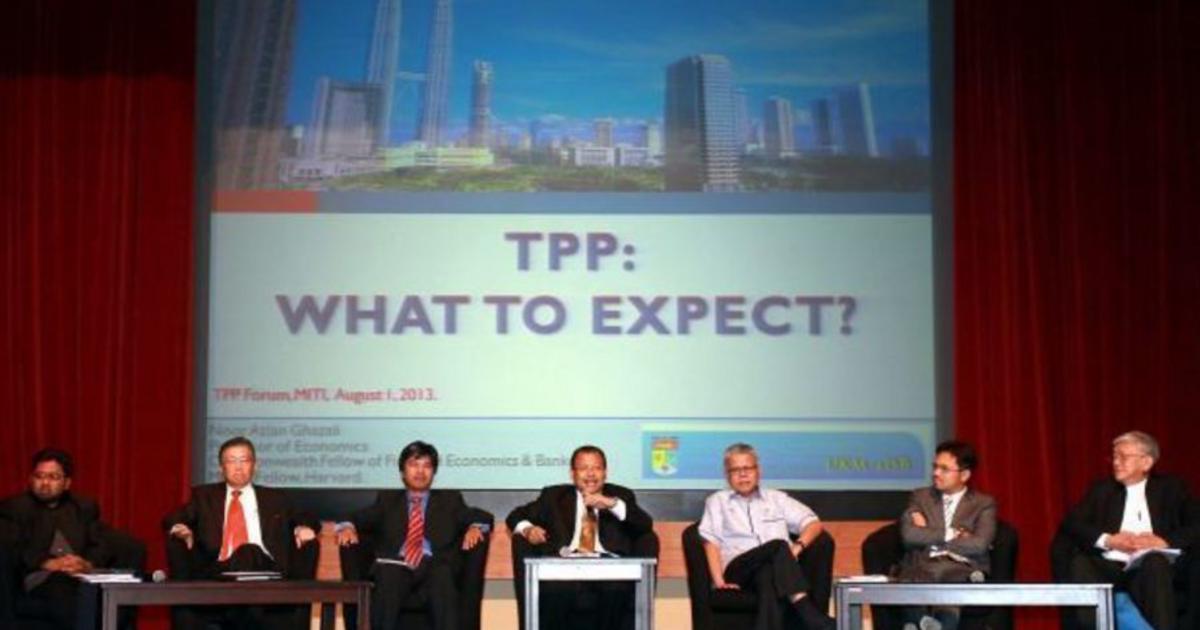 COMMENT The consensus of public opinion, as evident in the Court of Public Opinion in general and the social media in particular, favour the translation of the complicated 10,000 page Trans Pacific Partnership Agreement (TPPA) into layman’s terms, shorn of the technicalities and the jargon. Most people, even lawmakers and lawyers, confess that they are having difficulties in coming to grips with the language in the TPPA.

The TPPA is a multinational free trade agreement in which the is the main driver. Other nations which have signed up are , , , , , , , , , and . has indicated interest and won’t be able to re-negotiate the TPPA since talks have been concluded.

A cost-benefit analysis (CBA) of the TPPA would be released in two weeks time by the Ministry of International Trade and Industry (MITI.)

The jury would still be out in the coming weeks and months on human rights, a point raised by Suhakam, and the issue of investors being allowed to sue governments over public policy.

If the TPPA was controversial to begin with, the opposition to the agreement appears to be somewhat more mute since the release of the text of the Agreement. MITI has a note on its website http://www.miti.gov.my/ directing traffic to the New Zealand Government website http://www.mfat.govt.nz/Treaties-and-International... for the text of the Agreement.

The various stakeholders see the TPPA in terms of what it means to them oblivious to what it may spell out for the economy and the country.

Some examples would suffice to illustrate the point on stakeholders.

The Malaysian Trade Union Congress (MTUC), for one, has been unable to fathom the TPPA and has called for a dialogue with the Minister of Human Resources and the Minister of International Trade and Ministry on the agreement.

In any case, Article 153 has virtually fallen into disuse as much as the related New Economic Policy (1970-1990) from even shortly after it was introduced.

During the negotiations stage, was more concerned that the Government of Malaysia open up the procurements sector which had been confined to only specific groups under the country’s affirmative action policies.

Putrajaya was unable to counteract ’s arguments since the fourth specific area under Article 153, in its 1st prong, does not prohibit business from the government sector going to any party other than the Orang Asal and Malays. If at all such business has remained the exclusive preserve of the Orang Asal and Malays, it was a policy decision by the Federal Government, and in breach of Article 153 itself.

Aside from the four specific areas under the 1st prong of Article 153, the rest of the economy remains open and can accommodate the letter and spirit of the TPPA.

Briefly, the four specific areas are intake into the civil service, intake into institutions of higher learning owned by the government and training opportunities, government scholarships and opportunities from the government to do business. Patently, the Federal Constitution reserves a reasonable proportion in the four specific areas, by way of a special position, for the Orang Asal and Malays. Again, the component outside the reasonable proportion envisaged in the Federal Constitution remains open and thereby in line with the letter and spirit of the TPPA.

The, there’s concern in the medical community that patients, long used to cheaper generic drugs, would be saddled with expensive patent drugs under intellectual property rights and the right of manufacturers to recover the cost of research and development (R&D).

Here, there’s a long shadow being cast over the TPPA following a recent Supreme Court of India decision to deny patent rights in to Pfizer of Switzerland, better known for Norvasc, for a new cancer drug. It’s instructive that the Indian Supreme Court ruled that Pfizer had only one extra and minor ingredient in its new cancer drug and which wasn’t really necessary.

The Supreme Court, in a decision which has worldwide implications, endorsed and echoed the World Health Organisation’s (WHO) stand that all 20,000 proteins are known to man and that no new drug was possible, thus knocking a big hole in the argument of drug companies that they are engaging in expensive R&D to come up with new drugs and should be allowed to recover their costs and compensate themselves accordingly through patent rights.