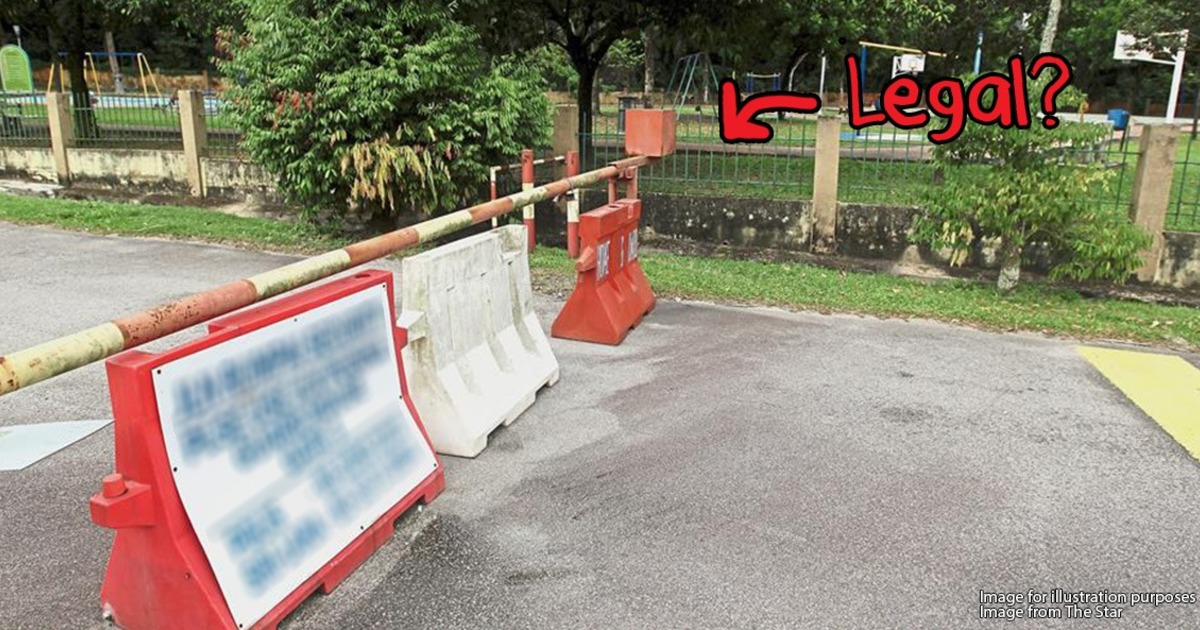 Neighbourhoods can legally block public roads in their taman. This lawsuit explains why

Guarded neighbourhood schemes – the ones with security guards, boom gates and barricades – is commonplace in Malaysia. For both residents or visitors, there might be a slight inconvenience as the guards would check your identification before letting you in. But this is a trade-off most would accept: a minor inconvenience in exchange for added security.

However, not all would view it the same. Recently, a lawyer in Bangsar Park who found the barricades a nuisance, sued a Resident Association over it.

His main argument: there are no laws or Acts of Parliaments that allows a guarded neighbourhood to be set up.

And he is right: there aren’t any laws that explicitly mention it.

[READ MORE: The lawsuit that made neighbourhood boom gates legal in Malaysia]

There are no laws allowing a guarded neighbourhood...

For you lawyers out there: the full case judgement.

First, a brief overview of the case. The lawyer owned a house in Bangsar Park, which he rented to a tenant. The house wasn’t part of the guarded neighbourhood scheme set up by the resident association. However, it was right on the edge of it, and the back lane was barricaded as part of the setup. If they wanted to access it, they claimed that they needed to drive out to the main road, and then go through the guard house. There, they would need to show their identification and give personal details before being allowed in.

Because of this, they couldn’t enjoy their private property as it was obstructed. Not only that, they would have to give their personal information to the guards, which violated their right to protect their personal data.

They weren’t the only ones affected, as they claimed the barriers also denied the other residents unimpeded access in the area. The barricades had been set up so there was only one access point in and out of the area, which is at the guard house. This caused traffic jams, illegal parking along the side roads, as well as air and noise pollution which lowered the property value.

They also said that the obstructions were dangerous, as police or fire trucks might be blocked when there’s an emergency. This would cause “death traps” in the area. As the landlord, the lawyer owed a duty of care to his tenant.

So he sued the Residents Association (RA) on these points:

The first point addressed by the judge: Are guarded neighbourhoods actually legal?

It’s technically true that there are no laws or Acts allowing it. However, it’s legal for your local council to approve it, which in this case, is DBKL.

Under something called Lampiran GN which is issued by the Ministry of Housing and Local Government, local councils are given legal powers to approve of guarded neighbourhoods.

There are also a few Acts that when read together, grant local authorities the right to do things which are necessary to improve public health, safety and convenience. The Acts mentioned by the judge were:

So just because there are no big laws that say it’s legal, that doesn’t make it illegal. There might just be smaller laws that work together which makes it legal.

Verdict: the judge ruled that the approval given by DBKL to the guarded neighbourhood is lawful.

Is it actually a nuisance, or just an inconvenience?

Next point: whether the RA committed torts of nuisance, both public and private. To know what a tort is (no, it’s not a pastry), you can read it below. A simplified version of it is: tort is a civil wrong that causes harm or loss to someone else, which the other person can sue for.

Nuisance is one type of tort, and can be divided into public and private nuisance. A simple version of it is:

In cases of private nuisance, there are a few things to consider. For this case, it basically boils down to: was the guarded neighbourhood setup stopping the lawyer and the tenant from accessing their property? Was it obstructing them or just inconveniencing them?

To determine this, the judge went in person to view the house. Having visited it, she commented that:

Basically, they could have accessed the back lane through their own house. Or, they could walk through the guard house, which is only a few meters away.

She also commented that there needs to be a balance between personal inconvenience, and the communities’ interest.

Verdict: There is no private nuisance caused by the resident association.

The procedure for a case of public nuisance can be tricky. The simple version of why it’s tricky is because public nuisance is actually a crime, and is dealt with by the Attorney General (basically our country’s lawyer). But in certain cases, you can sue someone for public nuisance, IF you have suffered more than the general public.

In this case, the judge decided that the Residents Association did not commit public nuisance. The lawyer and his tenant did not suffer more than the general public. She stated that:

Verdict: There is no public nuisance caused by the resident association.

As for asking for asking identification, it did not breach the PDPA, as it was necessary for preventing or detecting a crime in the guidelines. It had also been discontinued by the Resident Association since 2017.

In the end, the resident association won – the case was dismissed with costs.

Edit: The lawyers had filed an appeal on the same day the judgement was delivered. We’ll update this article for any new developments on the case.

Don’t be scared to ask for help

Knowing the case now, some of you might wonder: “If he could access his back lane through his house, why did the court accept this case? Shouldn’t it be thrown out?”

Turns out, something like this can still be brought to court. However, that wasn’t the only issue, as it was included with the issue of its legality.

“Well, it was a triable issue. That is not something that can be resolved on affidavit. He did not sue for that per se; it was packaged with his other complaints. However, we showed that that allegation of his was baseless.” – Fahri Azzat, lawyer representing Bangsar Park Residents Association.

Cases like this can also be scary if you’re part of a resident association. As mentioned before, there are no specific laws or Acts created by parliament on setting up a guarded neighbourhood. Court cases can also be costly, which might cause some to cave in to the demands without even going to court.

So when you’re in a tough spot legally, whether you’re a resident association or just an everyday person, the best advice is always: ask a lawyer.

“Firstly, they must seek legal advice. There is no way around it. Secondly, they need to be represented and not defend the case themselves.

The Defendants in this case did not have a lot of funds despite their residents living in Bangsar. They had a lot of difficulty raising funds to pay us. We did not charge our full rate for the case either because of their situation and the issues were interesting enough to me personally.

The point is seek help even if you don't have the means - ask about. There will be someone who may able to help. The worse thing to do is defend it yourself, or keep quiet and hope it will go away.

One of the Plaintiff's is a well-known medical litigation lawyer; and his counsel is a very senior and respected counsel. So they are a formidable team on their own. To go up against them without legal support is not an advisable thing to do.” – Fahri.

Even if you feel that there is no hope, and all roads are barricaded, ask around. There might be someone who’ll raise their arm to represent you, as we can see in this case.