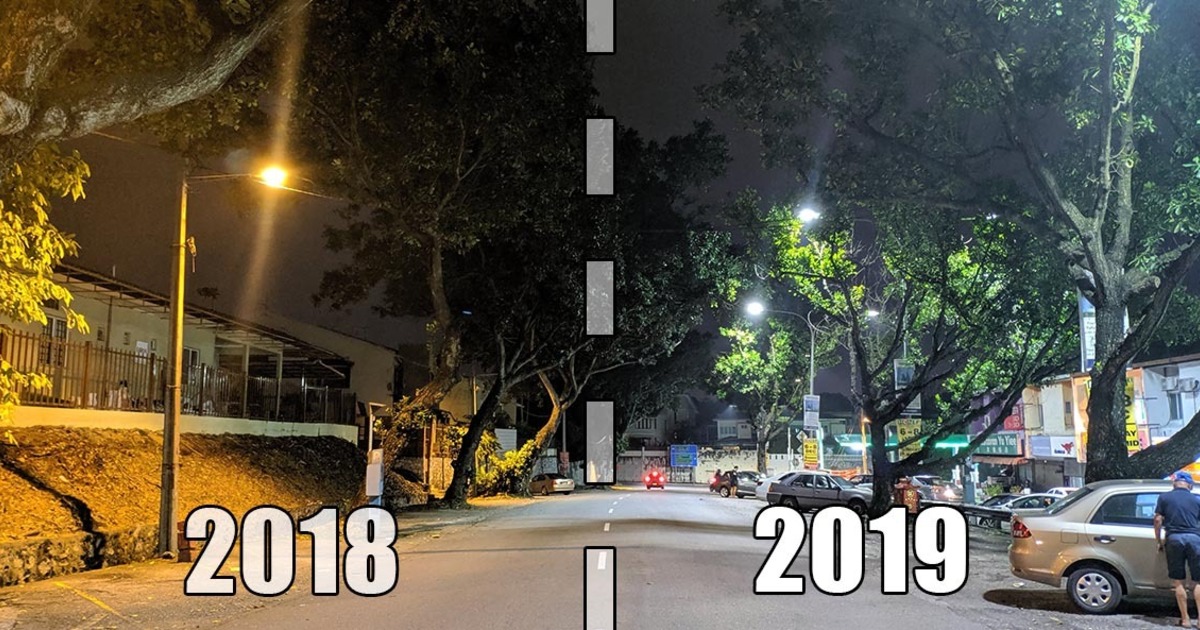 Malaysian streetlamps are turning white. The reason is more complicated than you think

A well-lit street at night is something that many of us take for granted, and it’s something we don’t really notice unless, well, unless they aren’t working. It’s only when you’re squinting in the dark that you realize how much of a difference that warm orange glow makes.

But over the past year, you may have noticed a change in your neighborhood street lamps – they’re much brighter, and much whiter. These are a result of the government’s push to replace the old orange bulbs we’ve been using for decades, with newfangled LEDs (Light-Emitting Diodes).

Specifically, the ministry that’s LED-ing the way in this initiative is MESTECC, the Ministry of Energy, Science, Technology, Environment and Climate Change. They’re basically the people who use science and technology to conserve the environment – such as fighting peat fires and haze – as well as innovating new methods for ecologically sustainable economic growth (aka eco-friendly ways to make money).

As it turns out, a simple change in light bulbs can start a long chain of events that affect the environment – something we’ll get into later in this article. But don’t worry about missing out if the street lamps in your area are still orange, because...

More street lights in Malaysia will be LED by 2020

This sounds pretty obvious but street lamps serve the function of lighting up an area at night for safety purposes, whether to spot road hazards or threats hiding in the darkness. There are also laws that require the local authorities to provide street lamps in all public areas, such as in Section 4(1)(d) of the Street, Drainage, and Building Act 1974:

The local authority shall, so far as the funds at its disposal will admit, cause all public streets together with the footways thereof, whether covered by arcades or not, to be maintained and repaired and may—
[...]
(d) provide street lighting.

There are a whole bunch of other laws and regulations that are related to street lights but, suffice to say, the government (whether federal or state) is responsible for providing, maintaining, and paying the electric bill (which comes from your tax money).

In fact, very recently, MESTECC and the Ministry of Rural Development (KPLB) have collaborated on a project to provide 10,000 street lamps (which MESTECC tells us is now over 25,000) on village roads in Peninsula Malaysia. And yes, you guessed it…. they’re all LEDs. Meanwhile, as of June 2019, almost 60% of the 367,000 street lights under TNB in Peninsula Malaysia have been replaced with LEDs (hence why you’re beginning to see them more now), with plans to replace the remaining 40% by 2020.

These changes aren’t just happening in Malaysia, but many countries have also started transitioning to LED street lights.

MESTECC says that the LEDs used in these street lights are capable of cutting electric bill costs by 30% – 40%. If you consider that Penang alone paid RM13 million in street light electricity bills in 2017, the cost savings to the entire country would be pretty significant.

And a lot of this falls down to how LEDs work compared to conventional fluorescent or incandescent bulbs.

Have you ever wondered why street lamps are orange?

Unless you’re familiar with advancements in lightbulb technology, you may think that lightbulbs still work the same way you learnt in school Kemahiran Hidup classes – the “Thomas Edison” incandescent lightbulbs with the curly filament that heats up and produces light. But in actuality, most homes (and street lights) nowadays use a completely different type of bulb broadly known as Gas-Discharge Lamps. Here’s a brief description of how they work:

The bulbs used in street lights are called Sodium-Vapor Lamps which, as the name implies, contains metallic sodium as the the additional substance. It’s this sodium vapor that gives off the characteristic orange glow that we’re all familiar with. For years, sodium vapor lamps were the preferred choice to light the streets by governments all over the world because they were the most cost-efficient type of Gas-Discharge Lamps.

LED lights don’t involve the use of gas or vapor. Instead, it uses semiconductors to influence the movement of electrons from positively-charged to negatively charged areas (here’s the proper explanation). An “LED light” is basically a whole bunch of LEDs clumped together to shoot out light.

The preference for LEDs become obvious when you consider the following factors:

On the other hand, LEDs generate very little heat (about 5% of the electricity used), meaning that less electricity is needed to generate light. 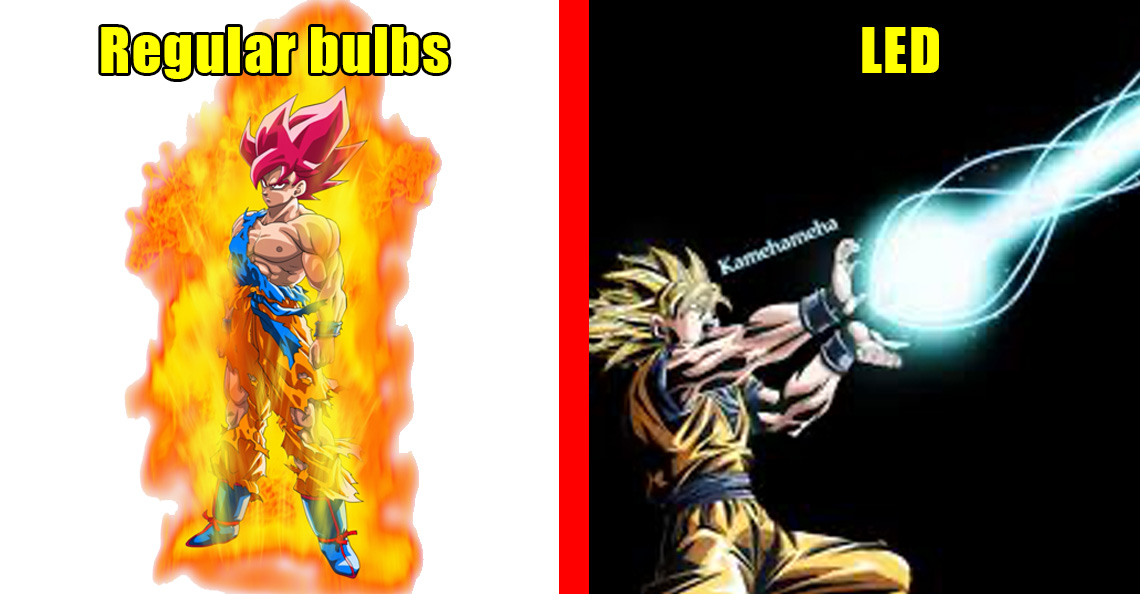 One thing you may have noticed with traditional bulbs is that they generate light in an almost 360-degree radius. Because street lamps don’t need to light up the sky, the light needs to be ‘directed’ towards the ground using reflectors – this is why you’ll see reflective plates or coatings in the fixtures of orange street lights. However, having to direct the light also means that up to 50% of generated light never actually leaves the lamp fixture.

LEDs can be configured to focus light in any direction, so no reflectors are needed, which means little to no light is lost. This means that you can use an LED light with less wattage (or even less bulbs in general) to light up the same space.

All bulbs will eventually stop working at some point in time.

Sodium-Vapor Lamps have an estimated lifespan of 24,000 hours, which can be reduced in high-vibration environments (like near a main road). This means that local authorities not only spend more money in replacing bulbs, but also in manpower costs to maintain them.

Industrial LEDs are estimated to last more than 100,000 hours.

There are two parts to this – carbon emissions and mercury pollution.

Despite moves towards renewable energy sources like solar, MESTECC tells us that Malaysia is still mostly powered by burning fossil fuels such as coal, oil, or natural gas; which increases our environmental impact in terms of carbon emissions and contributing to climate change. In this sense, until we have the technology and means to fully move to renewable energy, the most we can do to reduce our carbon footprint is by consuming less electricity – like switching to LEDs.

You may not know this, but all Gas-Discharge Lamps in everyday use contain mercury, a toxic substance. But don’t panic just yet, the mercury is contained within the glass, which only becomes an issue when it breaks. Although the amount of mercury isn’t directly harmful if you happened break a bulb, it becomes a problem when we throw away our bulbs with our regular trash; where it will break during the waste disposal process. If you take into account the collective number of bulbs that are disposed, then the amount of mercury released into the atmosphere becomes less negligible.

Here’s the thing though… burning fossil fuels also releases mercury and, until LED technology became more accessible, the energy-saving properties of Gas-Discharge Lamps were seen as a better alternative despite containing mercury themselves.

This may be pretty obvious by now, but LEDs do not contain mercury.

MESTECC takes their commitment to the environment pretty darn seriously and we saw this first-hand when we visited them in their Putrajaya HQ, where we were served water in cups instead of plastic bottles. They said this is part of a conscious effort to eliminate single-use plastics in all government offices.

Although this article can be seen as a plug for you to replace the lights in your house with LEDs, there’s something you should know – LEDs at this point cost more than energy-saving bulbs. However, the savings to your electricity bill and the environment over the long term will outweigh this initial cost. The other thing is that there are still some fixtures that still work better with traditional lights that shine in a 360 degree radius, such as lamps (it would be funny having a lamp which only shoots light upwards).

Aside from LEDs, MESTECC has also started several initiatives that you may be able to participate in:

And of course, try to recycle as much as you can. Since we’re on the topic of light bulbs, there are places that prepare special collection boxes to safely recycle light bulbs, like in Ikea outlets.

We hope you found this article en-light-ening!