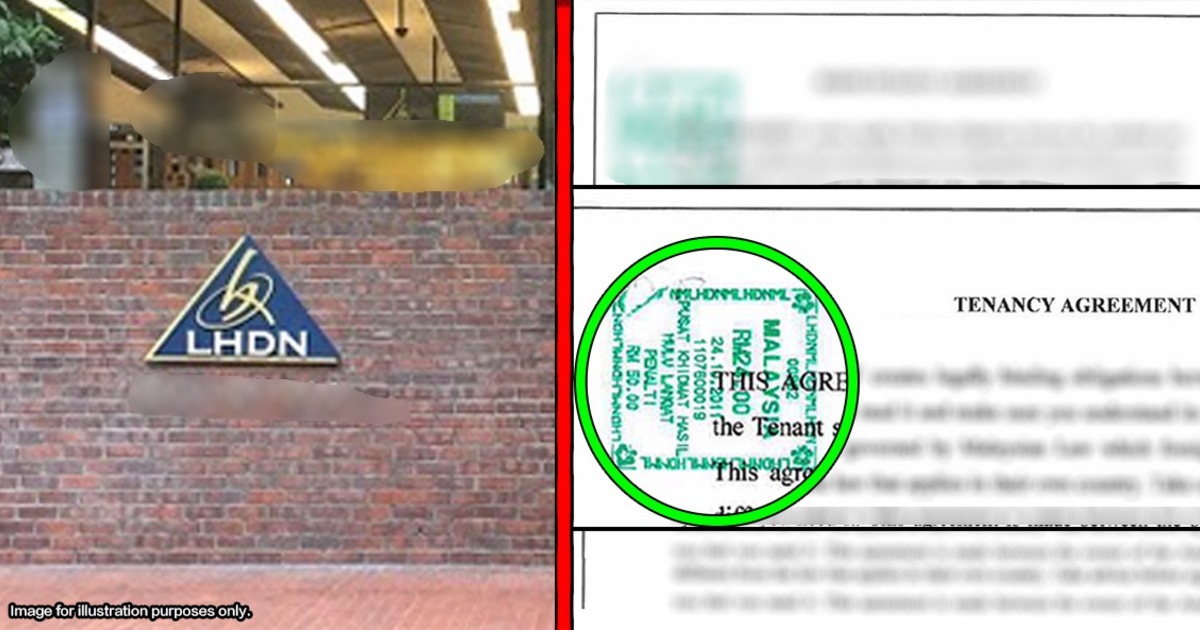 Why could this green chop cost you thousands of ringgit?

When buying or renting property, you’d probably notice that the agreement itself comes with a few extra fees. Some fees are large, some are small, but as long as the deal gets done, you probably won’t think too much about it. Pay what you have to pay.

But for those renting, whether you’re the landlord or the renter, you’ll probably notice there is a green chop in the agreement. It could be as cheap as RM10, but depending on your monthly rent, you could pay nearly RM1,000. But then, why would getting such a small chop on your document cost so much? That little green chop is actually a necessary part for property agreements, and it’s called a stamp duty.

Stamp duty is a tax duty that’s imposed on documents that have a legal, commercial and financial effect. This would cover things such as tenancy agreements and land titles, and even insurance policies. It’s sort of like paying income tax for income, but now you’re paying tax for an agreement.

LHDN aka the Inland Revenue Board of Malaysia is the government agency that collects stamp duties. The stamp will be given after you made your payment as a verification. In short, you are paying tax to the government and verifying your contract at the same time.

Why is stamping your contract important?

The purpose of stamping your contract is to provide protection to the people who signed the agreement, as the document is now admissible for the court in case of a dispute.

For example, your landlord wants to chase you out from the house after two months of renting his house. But, in the agreement, it stated that you can stay in the house for 2 years. You bring this matter to the court to settle your dispute. Now, whether your agreement is stamped or not makes a huge difference.

With a stamp, it is safe to say your agreement can be used as evidence in court. Without a stamp, your contract cannot be submitted to the court as evidence. As per Section 52(1) of Stamp Act 1949:

So, if you didn't pay stamp duty for your tenancy agreement, you can't use your agreement as evidence in the court to protect yourself.

But even if your agreement does not have a stamp, does not mean it’s invalid. You could still submit it to the court, but you now have to get it stamped, AND pay a slight penalty for not getting it done beforehand. Once that’s done, your document will now accepted as evidence.

So, the judge will not set aside your case, he will suggest you pay your stamp duty together with the penalty to LHDN first then return to the court to continue your case.

How much is the penalty?

Save where other express provision is made by this or any other Act, any unstamped or insufficiently stamped instrument not being a cheque or promissory note drawn or made within Malaysia may be stamped after execution on payment of the unpaid duty if the instrument is presented for stamping within thirty days of its execution if executed  within Malaysia, or within thirty days after…

In short, a penalty will be charged to you if you did not stamp your agreement within 30 days after your agreement is signed. The penalty is stated in Section 47A Stamp Act 1949:

For example, let’s say you signed your tenancy agreement on 1 July. Two months later, you have a dispute with your landlord on 5 September. You’ve already went pass the stamping period, which is 30 days. This means that you fall into category (a), which requires you to pay the original duty of RM10, plus a penalty of 5% of the original fee, or RM25, whichever is higher. Obviously, RM25 is higher, so in total, you would have to pay RM35.

If this is confusing for you, don’t worry. Just bring your documents to LHDN, and they’ll assist you in figuring out the penalty.

The longer you rent the house, you more you need to pay.

If you have an agent who was dealing with your tenancy agreement, the agent will help you with this matter and save you the hassle from going to the LHDN do it by yourself. However, if you have no agent and you were dealing directly with the landlord, you might have to visit the office yourself.

Depending on how long you’re renting the house as well as the monthly fees, the stamp duty fee would be different. For example, if you live in a luxury condo with a monthly rent of RM10,000, a 2 year tenancy agreement could cost you almost RM1,000. But you don't have to do the calculation yourself; the calculation is complicated. Bring along your tenancy agreement when going to the office and fill up some forms, the officer will assist you during the process.

And there are many ways to pay for it. Besides cash at the LHDN office, you could:

And you can even do the application process online first. LHDN has an upgraded system which is known as the Digital Franking Systems. After filling up your information online, you’ll be given a QR code. So when you go to an LHDN office, just bring your tenancy agreement and show the officer your QR code. Then the officer will give you a green stamp on your tenancy agreement using your information that’s stored online.

Sample 1 is issued from using the new Digital Franking System, that is replacing the red stamp in Sample 2 starting from 2011. After all...

Stamping is not that complicated

After you’ve made your payment, there would be different forms of stamping issued by the LHDN. Getting a chop on your document isn’t the only way.

The most common stamps are official stamp receipt or stamp certificate, which are issued electronically when the stamping application is done online via STAMPS. But do note that you have to attach a printed copy of the stamp certificate with your tenancy agreement as proof, to be able to submit it the court as evidence. Another form of the stamping is the Impressed stamp through the use of Digital Franking Machine as shown above in Sample 1 (basically, they just chop your documents). Lastly is the revenue stamp, which you could get from the post office, and is blue in colour.

In short, make sure you pay your stamp duty on time to safeguard your rights. In case of confusion, you can always make a call to LHDN, and they are happy to assist you.