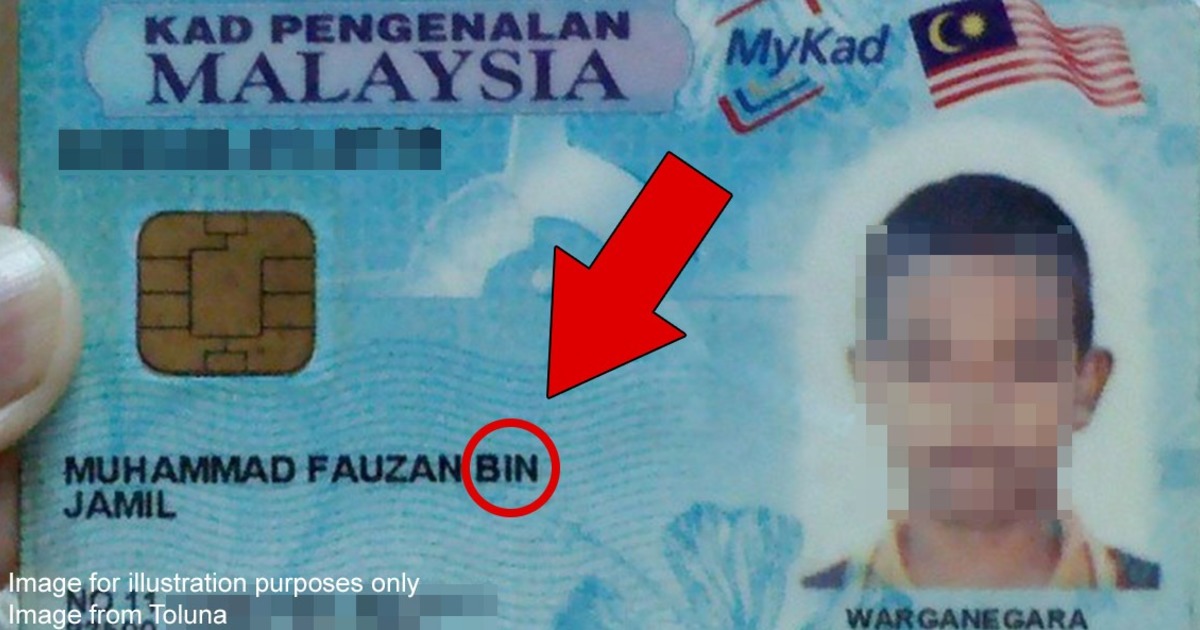 Can you choose not to have bin or binti on your MyKad?

When we see a Malay-Muslim name, we might think it’s common – or even compulsory – to have a bin or binti in the name. The same goes with having an a/l (anak lelaki) or a/p (anak perempuan) for Indians.

But some readers have asked if it’s compulsory to have one, and if you can remove it from your MyKad. We did some digging, and as we found out, it’s not always necessary to have one, be it a bin or binti, or a/l and a/p.

In some cases, you can even have it removed.

You can choose not to have one

In case you were surprised, so were we. According to a statement from the Home Ministry in 2017, adding the a/l or a/p is a norm for Indian parents, but it is not compulsory. This means that Indian parents can choose to not include a/l or a/p in their child’s birth certificate.

However, since it’s a norm to have one, JPN will first confirm it with the parents if they do not wish to use it.

Similarly, Malay-Muslim parents can actually choose to omit bin or binti from their child’s birth certificate. But it does not happen automatically, as it’s an opt-out process.

When a Muslim child is born, the parents will be given the child’s birth certificate draft. By default, their child will have a bin/binti on the certificate. To omit it, the parents would have to make a request to the registrar, if they have a good reason.

What is a good reason to omit bin or binti?

We contacted JPN (Jabatan Pendaftaran Negara) to ask about this, and according to a spokesperson, it’s generally done by those who have migrated overseas. This is because naming conventions in non-Muslim countries tend to use the family’s name, instead of using their father’s name.

There are also cases where it’s a mixed marriage between a Muslim woman and a male convert. If the convert chooses to keep his name, the parents might choose for their child to have the father’s last name.

Some people might decide to do it out of personal choice. When we searched online, there are stories on Reddit of Malay-Muslims who do not have bin or binti in their name. However, due to having a bin/binti being so common, there are some things to think about if you choose not to give your child one.

People might think your child is born out of wedlock. In Malaysia, children born out of wedlock cannot have a bin/binti with their biological father’s name. In most cases, they can only put a bin or binti Abdullah behind the child’s name. So even if the child is legitimate, this might cause fitnah and rumours about the child.

Having a nasab (bin or binti) makes things easier. Lineage is important for certain things under syariah law, especially faraid (inheritance law) as the bin or binti helps confirm the relationship between father and child.

[READ MORE: The untold story of the "bin Abdullah" children in Malaysia]

You can apply to have it removed from your MyKad

If you’re still keen to remove the bin, binti, a/l or a/p from either your MyKad or your child’s MyKid, here’s how to do it.

Malay-Muslims might need to wait awhile after applying. When we asked JPN, they said applications from Muslims to remove the bin/binti from the name might take some time, as the application would need to be reviewed. But if they find that you have a legitimate reason, they would allow it.

Indians might have an easier process, as we have readers who have applied to have the a/l and a/p removed from their MyKad, as well as their children’s.

Now that you know you can bin your bin, would you do so?