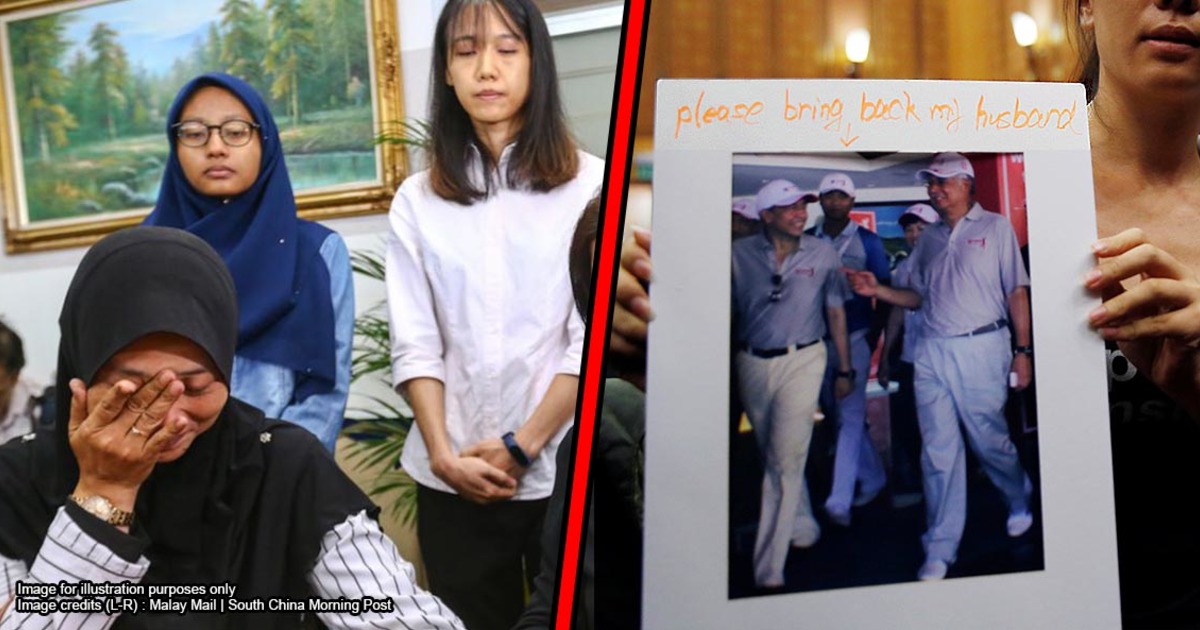 If your husband or wife mysteriously disappears, can you claim their insurance, EPF, etc?

The unexpected death of a husband or wife can be a harrowing experience for the surviving spouse. Whether on a personal level or in cases where it’s covered in the news, a lot of focus is placed on the emotional aspect – the anguish, sadness, sometimes anger that the surviving spouse is experiencing.

However, a report by the Malaysian Insight on the disappearance of Pastor Koh and Amri Che Mat, allegedly victims of “enforced disappearance” by Bukit Aman, presented an interesting question from their wives:

While this article isn’t the right (or sensitive) response to that particular question, it is an important one.

Legally speaking, a person is considered a “widow” when their spouse is recognized as being deceased through a Death Certificate issued by the National Registration Department (NRD). A Death Certificate is only issued after a qualified medical examiner has examined the body and filled out the paperwork to prove that the body is, beyond a doubt, no longer living.

So in situations such as the disappearances mentioned, incidents where people are swept away by floods, or even when planes disappear; you can kinda see where we’re getting at… a Death Certificate cannot be issued when there’s no body to examine. And if the person cannot be legally declared dead, it also means that their assets (properties and bank accounts) cannot be transferred over to their families, EPF and insurance money cannot be released, and wills cannot be executed – which can create huge financial burdens for the surviving family members.

Of course, this isn’t a dead end… there is a solution to this, but it’s a pretty roundabout one.

The person can be PRESUMED dead

To establish what we mentioned in the introduction, the criteria that the presence of a body is absolutely necessary for a Death Certificate to be issued can be found in Section 18 of the Births and Deaths Registration Act 1957 which states (in part):

Subject to the provisions of this Part, the death of every person dying in Malaysia and the cause thereof shall be registered by the Registrar in any registration area ... Provided that where a dead body is found [...]

However, there is something called a presumption of death, which means that although there’s no body to prove the person has died, there are enough factors or indirect (circumstantial) evidence indicating there’s a high chance the person is no longer alive. As an example, if a tsunami hits a beach resort where Ali is staying (and hotel records prove it) and no one is able to find or contact Ali in the months or years after the tsunami, it wouldn’t be far off to presume that Ali had died and his body carried off by the waves.

A presumption of death is done through the High Court, who will issue an order declaring that the person is legally presumed dead. So yes, there is a way around it, but it still won’t be as fast as you might think, because...

The Court will presume the person is dead after... 7 years

When the question is whether a man is alive or dead, and it is proved that he has not been heard of for seven years by those who would naturally have heard of him if he had been alive, the burden of proving that he is alive is shifted to the person who affirms it.

What this means is that, if the people close to the missing person (ie, family, friends, employer) haven’t heard from them in 7 years, anyone who believes the person is still alive will have to provide proof of their claim. In other words, the court has “automatically” presumed the person to be dead. So unless the surviving family members decide to challenge this (by claiming the person is alive), they can apply for a declaration of death order from the court.

However, if the family members don’t want to wait 7 years, they can attempt to convince the High Court that the person is dead. To make sense of this, we first have to look at Section 107 of the Evidence Act:

When the question is whether a man is alive or dead, and it is shown that he was alive within thirty years, the burden of proving that he is dead is on the person who affirms it.

So in a way, this is the opposite of the earlier point, where the court assumes that the person is still alive and it’s up to the family members to prove that they aren’t.

Needless to say, you’ll need to consult a lawyer about this as getting the court to agree is highly situational since proving someone is dead is just as hard as proving they’re still alive, if there’s no body or other forms of hard evidence as proof. That being said, there are incidents that also warrant the government to make such a declaration. For example, 10 months after the disappearance of MH370, the Malaysian government officially declared that all passengers and crew were presumed dead – which means that the courts will not question an application even if it’s filed under the 7-year period.

Once the order has been obtained, there’s one thing left to do.

After getting the order, you need to notify the NRD

Essentially, the objective of obtaining the order is so that the NRD can update the status of the person from alive to presumed dead in their registry. This is kinda like a replacement to a Death Certificate in normal circumstances.

The NRD’s website has a very detailed explanation of the process, but it can be summarized down to:

It’s best if you refer to the information on the NRD’s website, but bear in mind that there are different sections for Peninsula Malaysia | Sabah | Sarawak and slight differences in documentation requirements.

Special thanks to Fahri Azzat for his help with this article