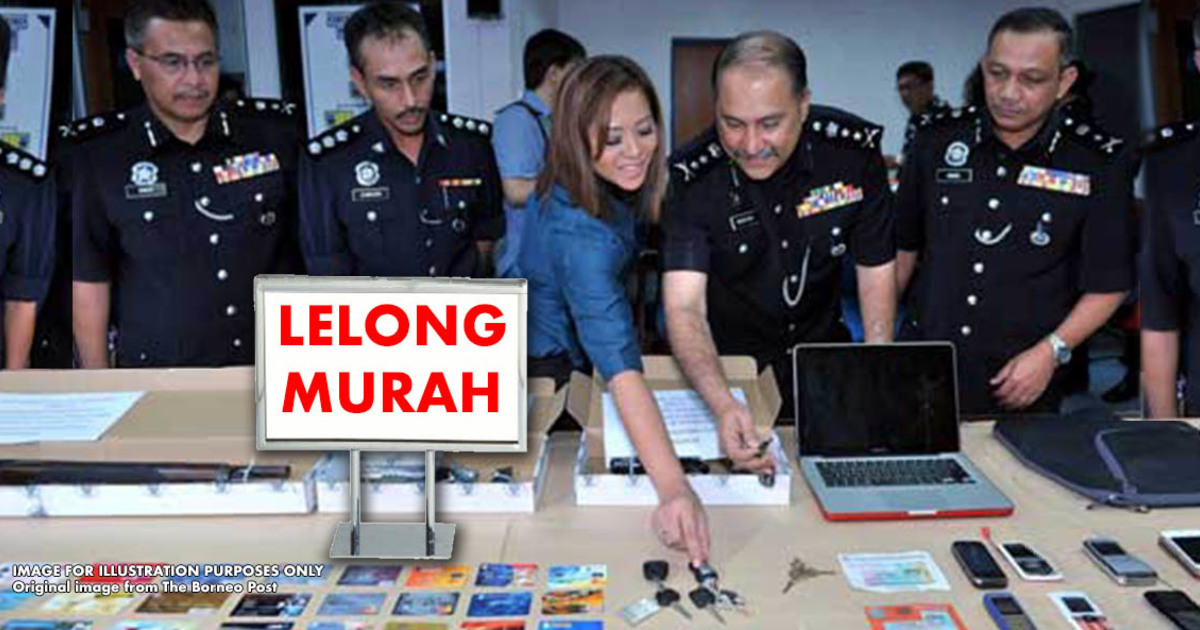 Did you know the PDRM are allowed to sell stuff they confiscate from criminals?

Off and on, you’ll see news reports where the PDRM or other enforcement authorities would showcase items confiscated from crime busts – items ranging from drugs to luxury watches to….live tortoises.

This leads to the next question of, where do they keep all this stuff? Like, they can’t be lying in a storeroom in Bukit Aman somewhere….right?

Obviously there’s a pre-allocated place to catalogue and store everything but, if you consider the sheer amount of items confiscated over the years, it either sounds like a housekeeper’s nightmare or the best party venue ever. Regardless, even the most spacious of storerooms need to be cleaned out every once in a while, so how do they do it? Well….

Yup, the PDRM’s Narcotics Division is auctioning off seized (confiscated) property from various drug busts and investigations. Before you ask, the drugs aren’t up for auction – they’re selling off luxury items and jewelry confiscated from drug-related crime suspects. For reference, this follows Section 10(5) of the Dangerous Drugs (Forfeiture of Property) Act 1988 which allows items that have been confiscated to be forfeited (permanently confiscated) if the Court finds that they were “illegal property” – basically bought using illegal drug money.

These auctions happen on a nearly annual basis, although it isn’t the only way they get rid of confiscated items….

Different crimes involve different laws so, to keep things simple, it’s best to go along the understanding that if a law allows the seizure (confiscation) of property, it will also provide guidelines on how to get rid (dispose) of it. The general reason for this is because items can take up too much space, cost too much to maintain, risk being stolen, or spoil/die. Permission to dispose of these items can come from the Courts, the Public Prosecutor, a Minister, or an officer in charge; again depending on the law in question. As an example, the Section 407A(1) of the Criminal Procedure Code states:

Notwithstanding any other provisions, the Public Prosecutor may apply to the Court for the disposal of any articles specified in subsection (2) at any time.

While there may be some exceptions (like with wildlife, for example), disposal methods can be narrowed down to returning it to the owner, selling it, or destroying it. Let’s take a look at each in a little more detail.

1. Returning the item to the owner

As mentioned earlier, there’s a difference between seizure and forfeiture. Very simply, a seized item is temporarily confiscated (and can be returned) while a forfeited item is permanently confiscated. An easy example is that if the police busts a TV robbery gang, the stolen TVs seized during the operation will eventually be returned to their rightful owners, who will be notified and asked to claim their property. This is in contrast to drugs seized during a bust, where the court will order a forfeiture of the contraband… in a way making it the “property” of the Government.

Usually though, the laws provide a time frame to claim these seized items (usually 3 months), after which it will become forfeited and possibly disposed using the other two methods. As an example:

Section 414(1) of the Criminal Procedure Code

414. (1) If within three months from the publication of a notification under subsection 413(3) no person establishes a claim to such property and if the person in whose possession the property was found is unable to show that it was legally acquired by him, the property may be sold on the order of the Chief Police Officer.

This may sometimes also extend to suspects or convicted criminals, where items seized from them can be returned if they aren’t directly related to the crime. However, this is a pretty complex topic that’s best left for another article.

If an item is illegal or dangerous, the only option available for disposal is pure and total destruction. This is usually reserved for stuff like drugs, illegal/pornographic media, and so on.

While burning used to be a popular option, it can be considered environmentally unfriendly, not to mention the risk of accidentally getting people high off fumes. These days, drugs and other paraphernalia are disposed in waste management centers as scheduled waste in accordance with the Environmental Quality Regulations 2005

Using the police auction above as an example, the Dangerous Drugs (Forfeiture of Property) Act allows seized property to be sold in a public auction:

Section 26(5) of the Dangerous Drugs (Forfeiture of Property) Act (in part) :

Where the movable property seized is liable to speedy decay or deterioration, or is property which cannot be maintained without difficulty, or which it is not practicable to maintain, and which cannot be dealt with under subsection (2), a senior police officer may sell or cause to be sold the same by public auction or in such manner as may be practicable...

A question you might be wondering is… where does the money go?

Although the Dangerous Drugs (Forfeiture of Property) Act doesn’t specify it, the Criminal Procedure Code does:

Section 414(2) of the Criminal Procedure Code – Procedure where no claim established:

(2) If within six months from the publication of the notification no person has established a claim to the property, the ownership of the property or, if sold, the net proceeds of it shall then pass to and become vested in the Government of the State in which that property was seized.

As mentioned, there are many laws that cover the disposal of seized items, but it can be generally assumed that the profits from the sale would go to the government.

If you’re looking for some good deals on watches and other sorts of bling bling, the current auction is from 8am to 1pm on Thursday (Oct 18) at Foyer A, Ibu Pejabat Polis IPK Kuala Lumpur. You can view the full rules and conditions as well as list of items on auction here, or see them in person from 9:30am – 1pm on Thursday.

Some things to note are that items are sold as-is, and the department is will no longer be responsible for the goods once they’re sold. You can place a deposit of 5% (or a maximum of RM1,000) via bank draft or postal order and make the full payment within 7 days – so no need to carry along huge bags of cash.