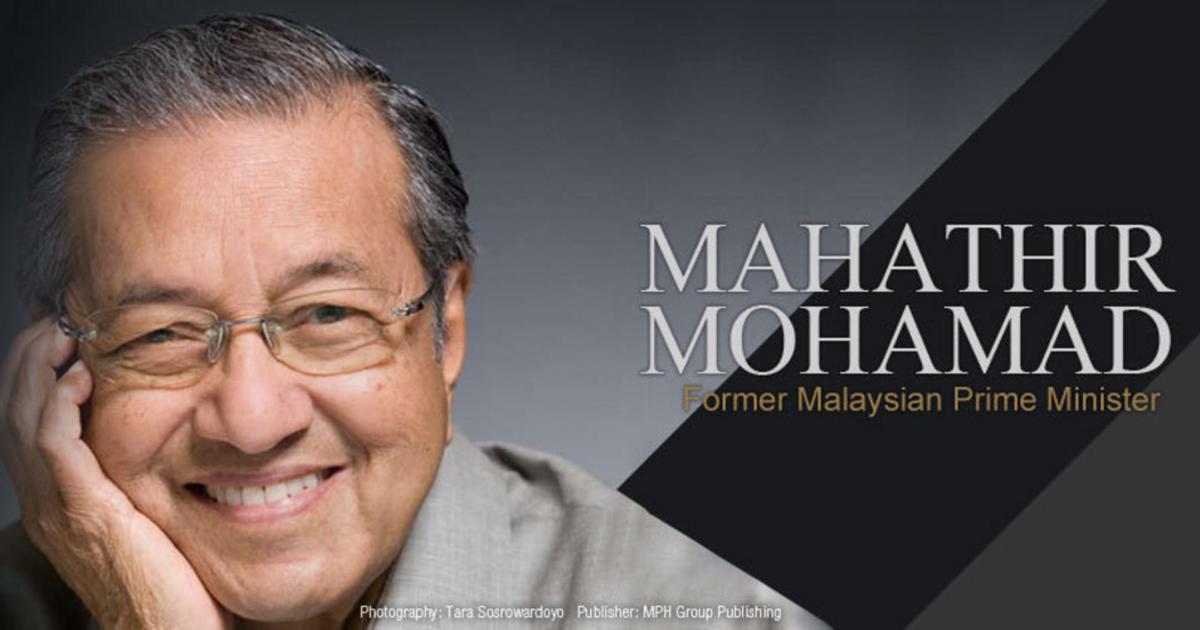 Mahathir as Malay as any Malay under Federal Constitution

NEWS ANALYSIS Jamal Md Yunus, the leader of the Red Shirts, would like to welcome former Prime Minister Mahathir Mohamad, "if he thinks he's Malay", to his rally which will take to the streets in Kuala Lumpur on Sept 16 or 916, Malaysia Day.

"If he thinks he's Malay," is obviously Jamal's snide reference to the fact that Mahathir's family does not originate from one of the islands in the Archipelago but from Kerala, southwest India. That's on his father's side. Some reports suggest that his mother's side was from Kerala too while others say his mother was from Kedah. In any case, we know almost nothing about his mother.

Patently, Mahathir is a Malayalee Muslim, also known as Kaka, distinct from the mamak or Patani who are Tamil Muslims. The Patani are descendants of Pathan men and Tamil women and speak both Tamil and Urdu, the official language of Pakistan and spoken by Muslims in India.

Mahathir is as Malay as any Malay under the Federal Constitution. Article 160 defines Malay as not an ethnic group but as a people, a nation without state or territory. The fact that Mahathir is a Malayalee doesn't make him any less Malay in the peninsula.

It was the British who first codified the term Malay to refer to the Bugis, Javanese, Minang, Aceh and other Muslims in the peninsula who habitually spoke in Malay to communicate with each other. In short, there's a Malay language but not an ethnic group under that term.

The origin of the Malay language, as records go, begins in Cambodia as a dialect. Hindus and Buddhists from India turned it into the lingua franca for the Archipelago, hence the term Malay Archipelago. The Hindus infused Sanskrit words, while the Buddhists did the same with Pali words. Pali is a Sanskrit dialect in which the Buddhists wrote their scriptures.

The Malay population in the peninsula must be kept in perspective. As Hindraf Makkal Sakthi Chairman P. Waytha Moorthy wrote in a Memorandum to the Agong in conjunction with Merdeka Day this year, 70 per cent of the Malay-speaking population in the peninsula in 1957 was Indonesian. He was lamenting the fact that these Indonesians all went on to become citizens while 300,000 displaced estate workers, descendants of Indian migrants from some 200 years ago, all remain stateless.

Another perspective comes from Professor William Roff who wrote The Origin of Malay Nationalism (Universiti Malaya, Australian National University ). Roff explains in his book that as late as the 1880s, 85 per cent of the Muslim population in the peninsula was immigrant.

Roff was among the first scholars who wrote that the concept of Malay Nationalism was created in Singapore by Malayalee Muslims from Kerala, southwest India . These Malayalees set up the first Malay printing press and newspaper and later Utusan Melayu. Yusuf Ishak, a Malayalee and the first President of Singapore, came from this group.

All nationalism are defined by what they oppose. Malay Nationalism was to oppose Chinese economic domination of Malaya and Singapore .

By this time, the British had also helped lay the foundation for Malay Nationalism. They fought two wars with Bangkok to hack away the southern half of the Kra Peninsula from the Siamese Kingdom. They wanted to plant rubber and mine the tin.

The British also stopped the toll collection along the waterways by the sultans, gave them an annual pursue in lieu by way of compensation, and drew borders for them, converting riverine kingdoms or kerajaan sungei to territorial states in the western sense and created the Conference of Rulers.

The concept of Malay Nationalism had far-reaching implications and led to the opposition to the Malayan Union where the sultans would be reduced in status and the Malays would be in the same category as Indians, Chinese and others; the 13 May 1969 riots, the formulation of the New Economic Policy and the advent of a totally Malay Government under Mahathir.

Tunku Abdul Rahman, aware that the Malays were not Orang Asal, coined the term Bumiputera as an umbrella term to include them in the same category as the Orang Asal of the peninsula (Orang Asli), Sabah and Sarawak.