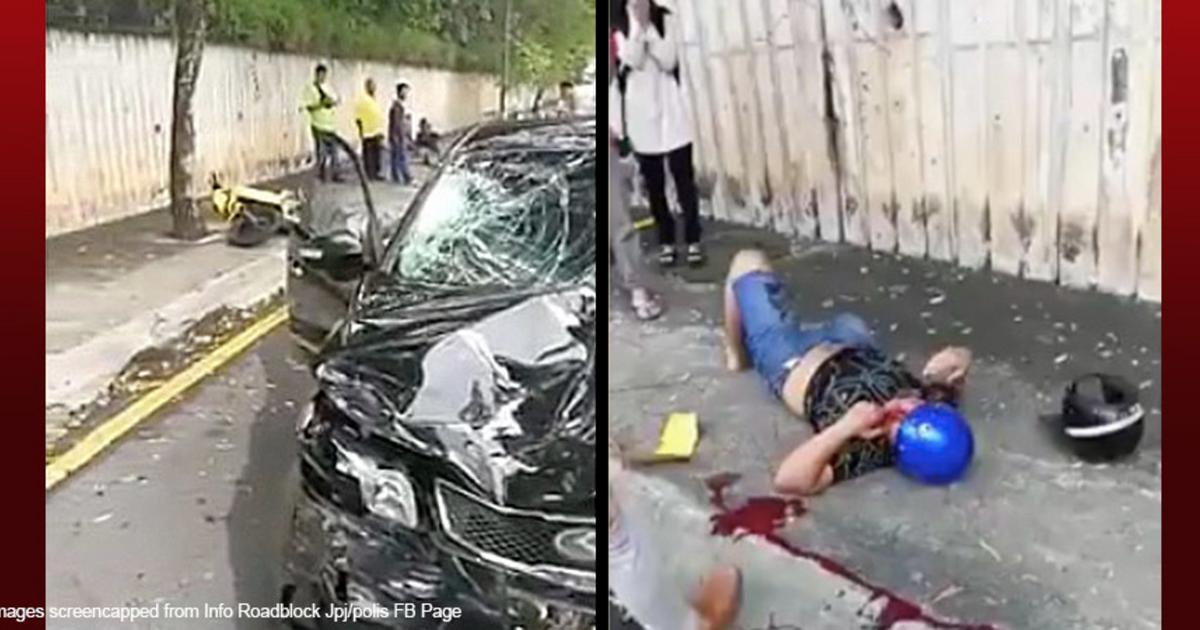 Is It A Crime To Knock Down A Snatch Thief In Malaysia?

Note: The image above is taken from Info Roadblock Jpj/Polis's Facebook Page. No fatalities were recorded in the incident.

Snatch thefts in Malaysia are becoming an increasingly common occurrence, with 7-8 cases reported per day in KL alone. In some instances, victims may decide to chase down the robbers, or a kind samaritan may come to the rescue, and in the ensuing chase knock down the thief - leading to injury or death. While many people may see this as just desserts, the law may take a different view and arrest the victim- which usually leads to heated public debates.

But does a victim actually have the legal right to chase down a thief and, more importantly, can the victim be put in jail if the thief dies?

Thanks to American crime dramas, many Malaysians would be familiar with the term Citizen's Arrest, which basically enables a non-law enforcement official (an ordinary citizen) to place another citizen under arrest. In Malaysia, this avenue is available under Section 27 of the Criminal Procedure Code, but with certain limitations. For the purposes of easy understanding, Section 27 allows you to temporarily place a person under arrest without a warrant if:

By extension, this also means that a by-stander can give chase and temporarily detain the suspect until the police arrive. 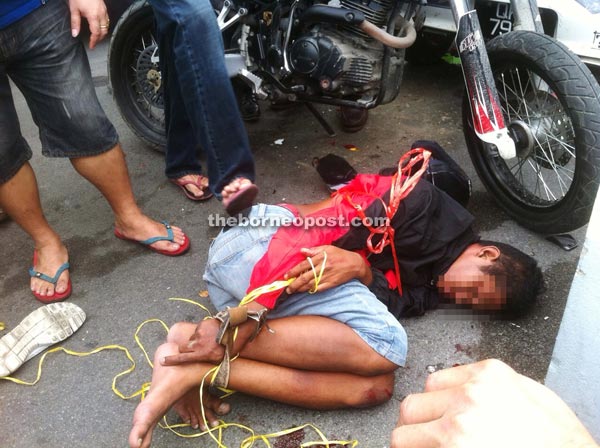 While the law states that you can arrest someone else, it doesn't actually say that you can chase them down in order to arrest them, or to take extreme measures such as ramming them off their bikes. We spoke to litigation lawyer Fahri Azzat from legal firm Fahri & Co using the case of Mohamed Mazis Mohamed Mokhtar, who chased and rammed down 3 robbers who robbed his family at knifepoint, as an example:

"It's an open legal question what a normal person can do to effect a private arrest. [In this case] he was chasing them, very likely to ensure they do not escape and to recover the valuables. He was in a position to do that." - Fahri Azzat, in interview with ASKLEGAL

However, this doesn't give anyone an excuse to go about ramming into or beating up suspects because...

You CAN get arrested if the thief is injured or dies

First off, it's very important to understand that, legally speaking, being arrested or even charged with something doesn't mean you're guilty of a crime. You're only guilty of a crime if your case is brought to court and the judge finds you guilty beyond a reasonable doubt.

[READ MORE:If you get arrested, does that mean you're guilty?]

In an interview on TV3's Malaysia Hari Ini, lawyer Haaziq Pillay drew anger and ridicule from the public for claiming that a person cannot retaliate against a robber with a knife if their own knife is bigger: 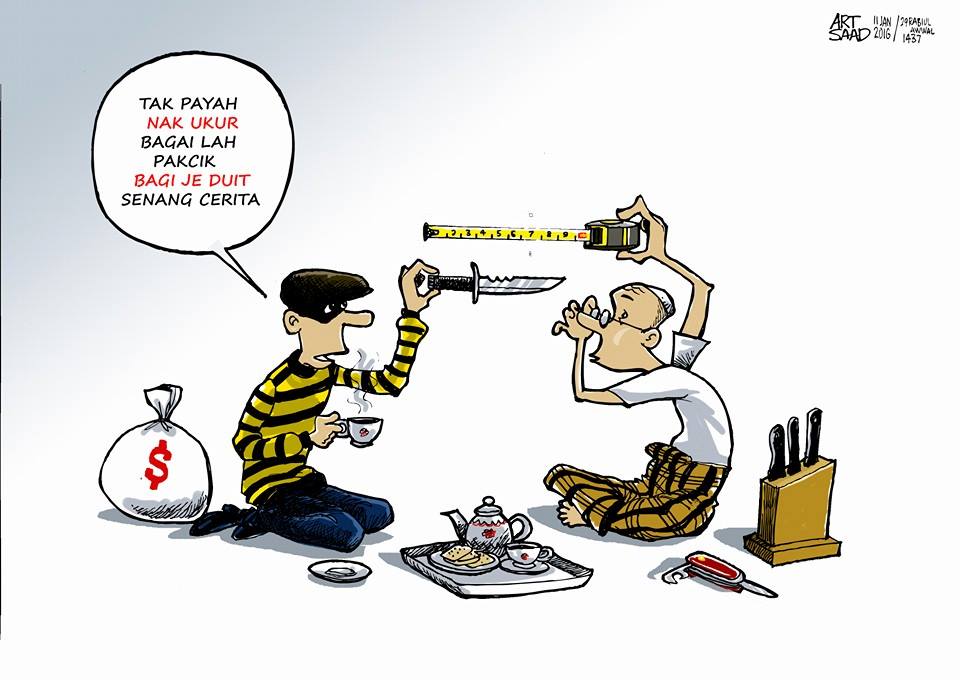 This is where the application of the law falls into a grey area because it can appear unfair for someone to get in trouble with the law for stopping a crime.

A lot of this misunderstanding comes from the principle of proportionality, which in the context of this article means you cannot use more force than absolutely necessary to ensure your safety or security in a particular situation. Proportionality is evaluated on a case-by-case basis, so it's very important to note that there is no one-size-fits-all scenario or explanation because the decision of the authorities to take action against you depends on the outcome of their investigation - called the facts of the case.

“Ultimately, the courts would look at the specific facts and circumstances on a case-by-case basis. What the court thinks is self-defence might be not what many people think.” - Sreekant Pillai, Criminal defense lawyer, as quoted by The Sun via The Malaysian Bar.

While the argument of proportionality may perhaps be more suited to your right to self-defense - where weapons and direct threats to your safety is involved - it can still be applied to chasing down snatch thieves and detaining them. For instance, while you may be justified in knocking the suspect off his motorcycle to prevent him from escaping, it would be a crime to reverse your car over him or beat him up after he's already down. This also applies to bystanders who come to the victim's assistance. Depending on the extent of the injuries, you may be charged with causing grievous hurt or, if the suspect dies, manslaughter.

“In certain circumstances, such as snatch theft, you can still chase the person to retrieve your property. But when you apprehend the person and get back your property, you then cannot rely on self-defence if you continue to beat the person to death.” - Amer Hamzah Arshad, Criminal defense lawyer, as quoted by The Sun via The Malaysian Bar.

Fahri Azzat also cautioned against beating up or humiliating a suspect while waiting for the authorities to arrive as this may also lead to criminal charges against you:

"Just because a person has committed an offence doesn't mean that anyone gets a free pass to beat or humiliate the suspect. Mind you, he has not been convicted in court so the presumption of innocence until proven guilty holds through. As much as it is against our sentiment and emotions, we have to accord someone charged or accused for an offence legal respect, not actual respect. Legal respect means respecting the legal system and its processes.

So though the person has been arrested or is charged, you cannot treat them like a criminal or worse abuse them." - Fahri Azzat

If you are a victim or witness to a crime, ensure your safety first before taking action! 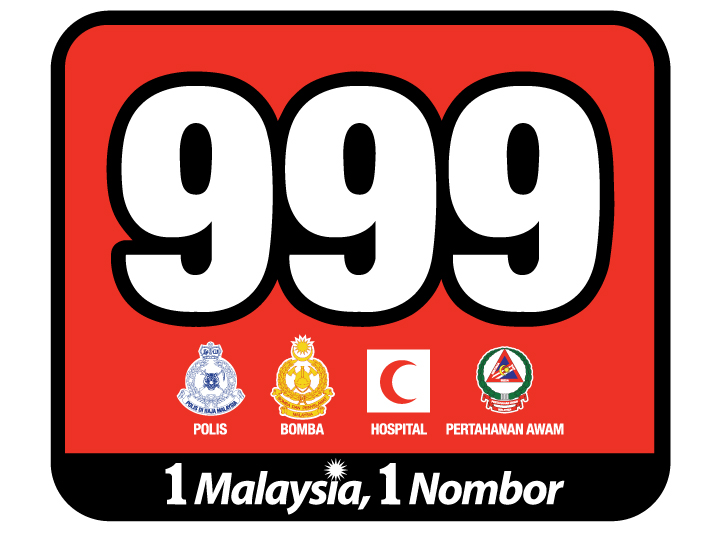 While many may still feel that these laws don't make sense as it appears to favor the suspect over the victim, the simplest explanation is that the laws are in place to prevent citizens from resorting to rampant vigilantism, which can sometimes lead to tragic results such a 2013 incident where two kind samaritans trying to stop a snatch theft incident accidentally hit the victim with their car instead, killing her.

The general advice is to exercise restraint, prioritize your safety and those around you, and call the police.

It’s also a good idea to remember the emergency number “999” or, if you live in Selangor you can download the MyDistress mobile app which sends a one-click GPS-tracked emergency signal to the police. The app is available for both for Android and iOS.