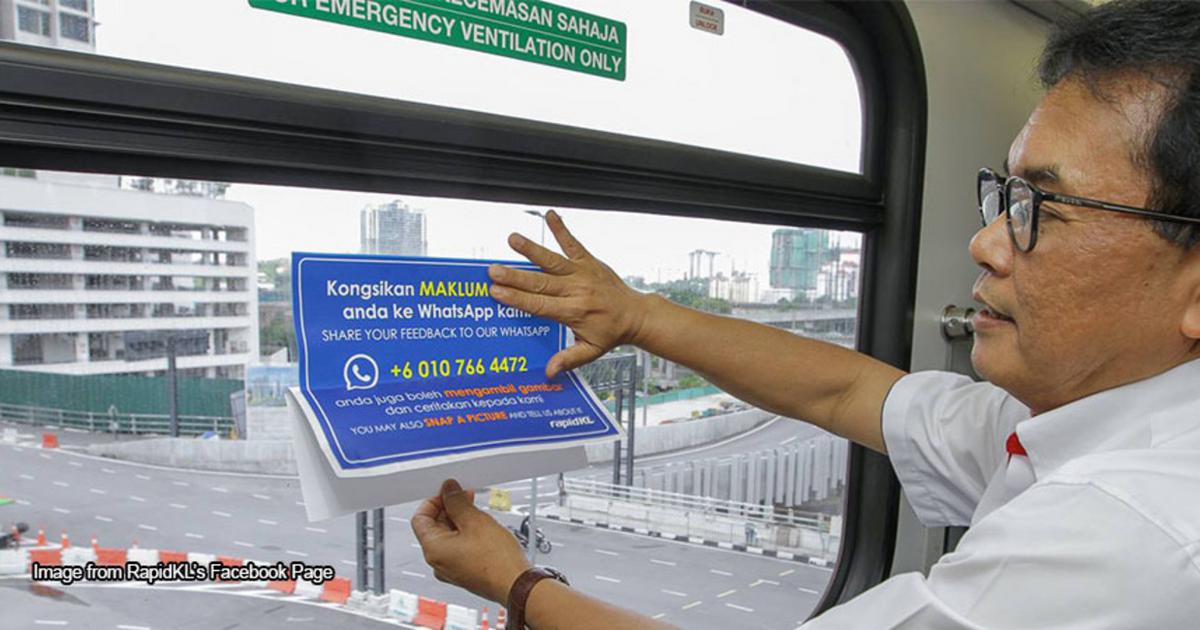 RapidKL came up with a new way to stop the MRT vandals. But they need YOUR help!

The past few weeks have played witness to a huge stir amongst public transport users in Malaysia, mainly due to the opening of the brand-new, sleek and futuristic MRT stations and trains – and along with them, the introduction of additional public bus routes that work with these trains to make previously out-of-reach areas accessible.


However, a greater ruckus was caused even more recently by reports that a few MRT stations had been vandalised and damaged within just 5 days of their respective launches. Comments and opinions blossomed everywhere in response to these reports, with some remarking that “This is why Malaysians can’t have nice things.”

Just 5 days in, and the victims are already popping up. Image Credit: The Straits Times

These incidents also bring to light a pressing question, and that is: are there no penalties for those who misuse or vandalise Malaysian public transport systems?

More importantly, if these cases of misuse hurt other people or damage their belongings, who shoulders the responsibility?

Breaking the rules will get you fined RM500 - except for smoking

There is no debating that our public transport systems are open to all who can afford and are capable of riding them. It must be remembered, though, that the term “capable” here also refers to the ability of passengers to abide by the laws that have been set for them when riding these systems.

Some of the more popular rules on Malaysian public buses and trains include: Some of the more well-known rules on the KTM Komuter. Image Credit: SAYS

Breaking any of these rules is a punishable act, and the penalty normally involves a fine of RM500.00. But smoking incurs a much harsher punishment, as explained in the Land Public Transport Act 2010:

(1) No person shall smoke any cigarette or tobacco products in or on any railway or railway premises, public service vehicle or tourism vehicle.

(2) A person who contravenes subsection (1) commits an offence ...


There is no sneaking past these laws either, even though you may not always see police officers in the vicinity of a public transport station or onboard the vessel or vehicle itself. This is because the Land Public Transport Act 2010 is actually enforced and implemented by the Land Public Transport Commission, otherwise known as the Suruhanjaya Pengangkutan Awam Darat (SPAD).

You are also not allowed to bring any goods, items, or luggages into a public transport vessel if the items in question have been deemed unsuitable for onboard carriage.

If you are unsure about whether some of your belongings are permitted to be carried onboard, check with the officers at information counters of stations, or with drivers in the case of buses. Remember that the LRT and MRT trains can get tightly crowded too. Image Credit: Isaac Tay's Flickr

Why, you ask? Well, it's presumably because these items may present a safety hazard in the event of an emergency or cause discomfort for other passengers. Going against this practice could result in you receiving a massive penalty, as the Land Public Transport Act 2010 elaborates:

A person who takes or deposits or causes to be taken or deposited any dangerous or offensive goods or luggage upon a relevant vehicle or railway ... commits an offence ...

But what about vandalism?

If the artist in you wants to satisfy the urge to dress the shiny walls of your nearst MRT station with visual masterpieces, you may want to hesitate as you reach for that can of spray paint or your hammer and chisel.

It may seem like a harmless act, at first glance, but it can also be regarded as a form of vandalism; an act of defacing or damaging public transport properties – and if this proves to be the case, you may find yourself in a huge cauldron of hot soup, according to the Land Public Transport Act 2010:

(a) wilfully or negligently damages any railway, railway premises or any property belonging to a licensed operator; Just some of the casualties of vandalism that the new Malaysian MRT stations have seen in the short time they've been open. Image Credit: SAYS

You may also wish to take heed of the fact that when it comes to vandalism, the Land Public Transport Act 2010 does not stand alone and is supported by the Penal Code. This is demonstrated through 2 specific sections, the first of which is Section 425 for Mischief - which in this context can be taken to mean that you're purposefully causing damage to something. This is punishable with imprisonment for a maximum of 5 years, a fine, or both.

In addition, Section 430A of the Penal Code also specifically penalizes damage to public transportation:

Section 430A of the Penal Code – Mischief affecting any public transportation (In part):

Whoever commits mischief by doing any act with intent or with the knowledge that such act is likely to obstruct, upset, overthrow, injure or destroy ... any form of public transportation, ...

PENALTY: Imprisonment for a maximum of 20 years, along with a fine or whipping.

But nothing gets damaged then I shouldn't get punished....right? 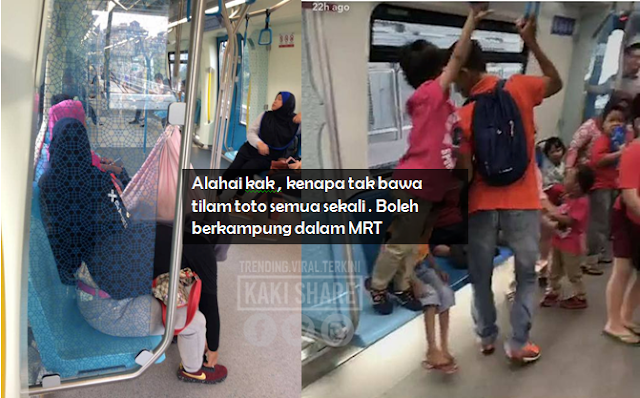 Some of unusual sights that you may just see on the MRT, documenting misuse of the trains. Image Credit: Kaki Share

Contrary to popular belief, and despite the fact that it is not a well-known part of the law, the misuse of public transport properties – from stations to the vessels themselves – is also an act that is punishable by law. This is especially the case if the misuse causes other riders discomfort and harm.

So yes, using the hand rails as a baby cradle or a jungle gym is actually an offence.

This prohibition is iterated in a number of forms in the Land Public Transport Act 2010, as seen below:


Section 200 of the Land Public Transport Act 2010 – Disorderly or offensive behaviour or nuisance (In part):

(a) behaves in a disorderly or offensive manner or commits any nuisance on a railway coach, railway premises, public service vehicle or tourism vehicle commits an offence...

PENALTY: Removal from public transport property by force, imprisonment for a maximum of 3 months, a maximum fine of RM1,000.00, or all three.

A person who wilfully does any act, or wilfully omits to do what he is legally bound to do, ... knowing that he is thereby likely to cause the safety of any person travelling or being upon a railway, public service vehicle or tourism vehicle to be endangered, commits an offence ...


3. Being negligent towards their own safety or the safety of others

A person who rashly or negligently, and without lawful excuse, does any act which is likely to endanger his own safety or that of any person travelling ... commits an offence ...

All three of these sections of the Land Public Transport Act 2010 combine and work in tandem to say one thing: Do not misuse public transport systems and policies, because you will be held responsible for your actions – especially if those actions bring trouble to another traveller.

And now, RapidKL will shame you on social media

Evidently, vandalising public transport properties is not something to be taken lightly! However, if prison or fines aren't scary enough for some people, perhaps being shamed on social media will - as RapidKL has started doing on their Facebook page:

What it boils down to, at the end of the day, is our own behaviours and habits on a daily basis. If we, as Malaysians, are able to look after the public facilities and amenities that have been made available us, new treats like the MRT will not have to exist in constant fear of being destroyed or abused. And we can't always depend on the authorities being there to stop it from happening.

For instance, in the event that you see someone exhibiting potentially dangerous or suspicious behaviours in the vicinity of a public transport property, if not outrightly vandalising public transportation, do not hesitate to speak to any nearby officers, SPAD representatives, or the authorities. You can reach the SPAD by their hotline (1-800-88-7723) or through SMS (Type "SPAD Aduan <your complaint>" and send to 15888).

RapidKL themselves have prepared a special number that you can send photos and complaints to via Whatsapp - 010-7664472.

"[We] seek the support of our commuters. Help us to tell off people who you see committing acts of vandalism, indecency and misbehaviour. If you do not feel comfortable to do that, snap a photo and share it with us for appropriate action to be taken.” - Zohari Sulaiman, Rapid Rail CEO, as quoted by Free Malaysia Today

Remember, keeping our community and our public transport facilities safe is not just the law’s duty, but also an obligation of all Malaysians alike.