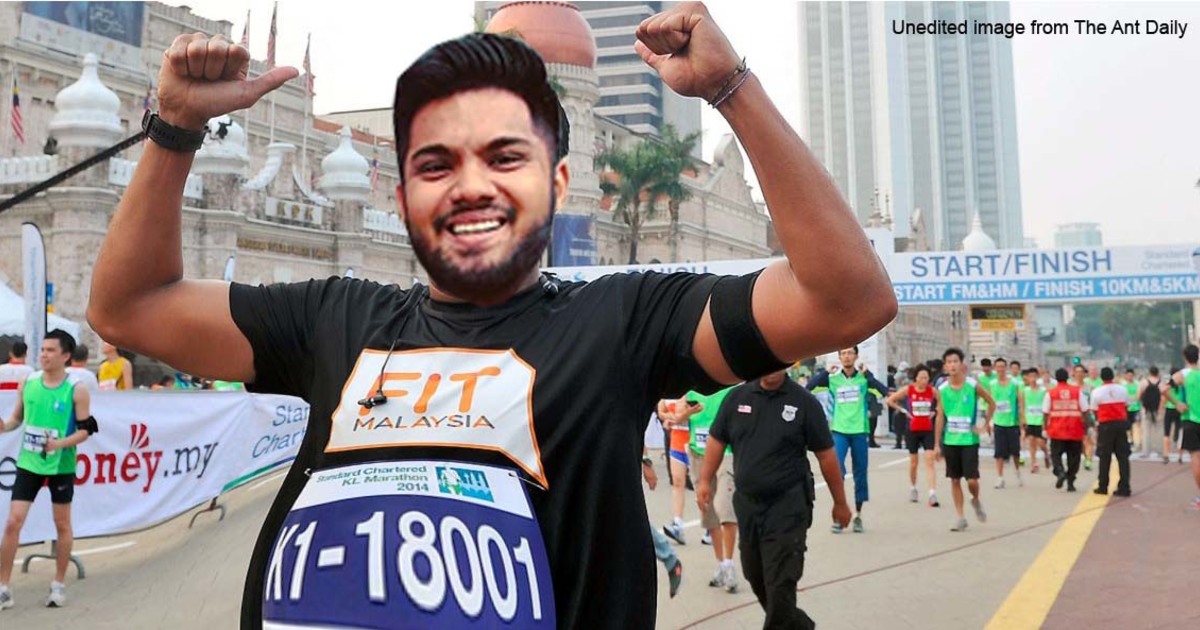 Malaysians are the fattest in Asia. And this survey will tell you why.

A few years ago, news came out that Malaysians were the fattest people in Asia. So couple weeks back, the chubby chonks at Cilisos ran their first ever ‘Jaga Diri’ survey where they asked Malaysians just how fit they were. This survey made its rounds over to the Asklegal office, which got our attention since we’ve always tried to be more fit ourselves (law is a heavy subject!)

With thanks to our friends at Fitness First, the results are in! Before we run you through the findings, here are some preliminary info:

Well actually, girls do it as well! Just not as many (6.1%)... or perhaps guys are just more forward about their, uhm, intentions. Funny thing is, it could even be a motivation… because our survey showed that the No. 1 goal of Malaysians when they work out, regardless whether guy or girl, is to look lean and slim.

If you’re there to oogle, err… just do it discreetly. Most importantly, DON’T HARASS THEM! “Creepy people hitting on me” was one of the top 10 annoyances of Malaysians who go to fitness centres. Anyway, don’t worry too much about these fellas cos they’re only the minority!

From our data, it pretty much seems like Malaysian men prefer doing things on their own, like using dumbbells or cable machines… while women prefer someone else guiding them or participating in group fitness classes. In fact, more women (24.3%) than men (10%) said that they prefer having a personal trainer to guide them!

If you didn’t know already, Fitness First is pretty much the expert in all of these. They have the largest number of personal trainers and group exercise instructors, and 1,500 different classes a week so you can choose one that suits your need at any time. If you prefer doing your own thing, they also have a wide range of equipment, including those with newer technology and weird names like SkillMill, Torque Tank, SkiErg – more than enough for you to click here to know more.

Anyway, that’s pretty much it for what men and women like. But what about annoyances? The top pet peeve for women is seeing sweat-drenched equipment (38.2%), while men said it’s people leaving equipment lying around (57.8%). Disregarding gender, the top 3 biggest annoyances in fitness centres are…

3. Taking the lift to Level 3? Better make sure nobody is around to see you…

Everyone has their own little threshold of the number of stairs they’re willing to walk up instead of taking the lift. We should know… Asklegal is on the 5th floor! On the survey though, most of our respondents (33.3%) said 3 flights of stairs! So if you’re going to level 1 or 2, maybe it would be a better idea to just walk.

Even though most of you ALREADY know that it’s a good habit to walk up the stairs, here’s some additonal motivation - Fitness First personal trainer, Wai San says that you can burn up to 15 calories by walking up ONE flight of stairs. Considering 1 pisang goreng is about 117 calories, maybe it wouldn’t be a bad idea to take the stairs more often just to offset some of that

4. Can you do more than 18 FULL pushups? Congrats, that’s more than the average Malaysian

Going into the specifics, we also found that the average number of full pushups for men is 25, and 11 for women.

Now push-ups are not just to impress people… they’re actually really good for many muscle groups, so even if you don’t have the time or space for a full workout, it wouldn’t hurt to do push-ups when you wake up or before you sleep.

But trainer Wai San warns that a lot of us don’t actually know the proper technique for a pushup. The chances of you getting injured increases if you have bad form, and skyrockets if you add more weight. If possible, just ask an expert or take advantage of the many resources available online on how to do it right.

5. The older you are, the MORE motivated you are to exercise

Respondents who said that “nothing is an obstacle for them to exercise” were mostly those above 50 years old (52.2%). There were only 13.8% respondents who were 17 or younger.

Younger people have more challenge-driven goals in life, like running marathons, triathlons and overcoming personal fears. Older people mainly exercise so they don’t need to depend on others to help them. That’s also probably why our survey showed that they REALLY jaga diri baik -baik…. all these uncle-aunties-ahpoh-ahkongs typically do more stretches, eat more supplements, eat more vegetables, and eat less fatty foods.

And it shows! Fitness First personal trainer Zec Lau said that he knows of a 65-year-old old-timer who could bench press 50kg, while the Asklegal staff only know how to approach the bench. #lawjoke

6. 97.1% of Malaysians said that they NEED veggies in their food!

Surprisingly, an overwhelming majority of our respondents told us that they NEED to eat vegetables! 54.9% of them said that they need it in EVERY meal, 27.7% said at least once a day, and 14.5% said few times a week. The other 2.9% just found veggies gross and crossed them out of their diet. Perhaps they’ve decided that high moral fibre was enough.

On another note, can you guess what are some of Malaysia’s favourite tea-time snacks? The top 3 are:

Thankfully, most of us feel some sort of guilt if we eat a lot of unhealthy food. Majority (36%) would exercise and eat something healthy the next few meals, while 10.1% would exercise to punish themselves and 13.5% would make sure their next meals are healthier. Trainer Zec suggests:

“Drink more water, increase your fibre intake and exercise more. The key here is to keep your metabolism running.”

And we’re pretty sure he doesn’t mean moral fibre.

7. Hmm…. Not sure why but more Chinese-speakers (19.1%) wanna be big and muscular Abang Sados!

Despite the fact that popular term ‘Abang Sado’ is in BM, we found that it was actually the least popular among our BM-speaking respondents (7.8%)!

Overall, we found that being bulky and muscular isn’t the No. 1 goal on everyone’s minds… it’s looking lean and slim. While that’s not a bad thing, there are actually a number of misconceptions surrounding building muscles.

“Many women think that building muscles will make them look like a muscular man. Men, on the other hand, only focus on upper body instead of lower body,” Trainer Wai San tells us. Muscles aren’t for vanity… it actually for HEALTH. “Building muscle is really important because the muscles help hold your bones to support your body better,” she adds.

If you’ve ever thought that walking around shopping malls for 4 hours is a form of exercise, well, you’re not alone. In fact, 15.9% of men also agree with this! Say what you will, but a study in the UK found that British women burn as much as 15,000 calories yearly by shopping. Unfortunately, a lot of it goes to waste because 33% of them snack while they shop. Go figure.

On a somewhat-related note, more women (39.63%) also felt that house chores were a form of exercise compared to men (24.32%). A clean house and glistening biceps? Not a bad deal actually.

More higher-income earners seem to practice healthy habits – they meditate more, take more supplements, eat clean, drink at least 8 cups of water, and eat their meals on time. That’s probably why more of them consider themselves to be either ‘very healthy’ or ‘healthy’ compared to those who don’t earn as much. Oh, unsurprisingly, they’re also the ones who track their fitness levels with a tracker.

We also found that they’re generally more independent than lower-income earners, as more of them can work out without gym buddies.

But here’s the thing... you don’t need to be rich to be healthy. You just gotta cultivate healthy habits in your life, and be motivated enough to STICK to them. Research says that it takes 21 days to form a new habit… so before 2018 comes to a close, why not pick up a good habit? (Good ones like doing daily push-ups, sleeping earlier and making wiser choices with your food)

10. Malaysians have all sorts of funny excuses NOT to exercise

First off… can you guess the top 3 reasons to why Malaysians don’t exercise? *drum rolls*

When we pried further, we also found that there were some other p-r-e-t-t-y interesting responses:

Besides some funny ones, it was kinda sad to read comments about being judged and feeling shy… but you know what, often times it’s just in our own heads. A lot of people who go to fitness centres – yes, even the good-looking ones – are more conscious of THEMSELVES rather than the people around them. Working out ultimately benefits yourself, so why deny yourself that opportunity to live a healthier life just because of what others may think?

But if you ever needed the help to get fitter, now’s the time

Everyone has ‘that moment’ when they realise that a change is needed in their lives. But sometimes, like in the point above, our own insecurities, fear, disadvantages, situations or habits make it almost impossible for us to progress. That’s precisely what our friends at Fitness First want to help you with.

If fitness is part of your 2019 New Year’s resolution, Fitness First has a first joiner’s promotion where new sign-ups will enjoy a start-up fee of RM 0. Yup, you read that right – it’s a ZERO. The promotion only runs till December 31st 2018, so why not arrange a free trial to test them out for yourself? Check it out here!