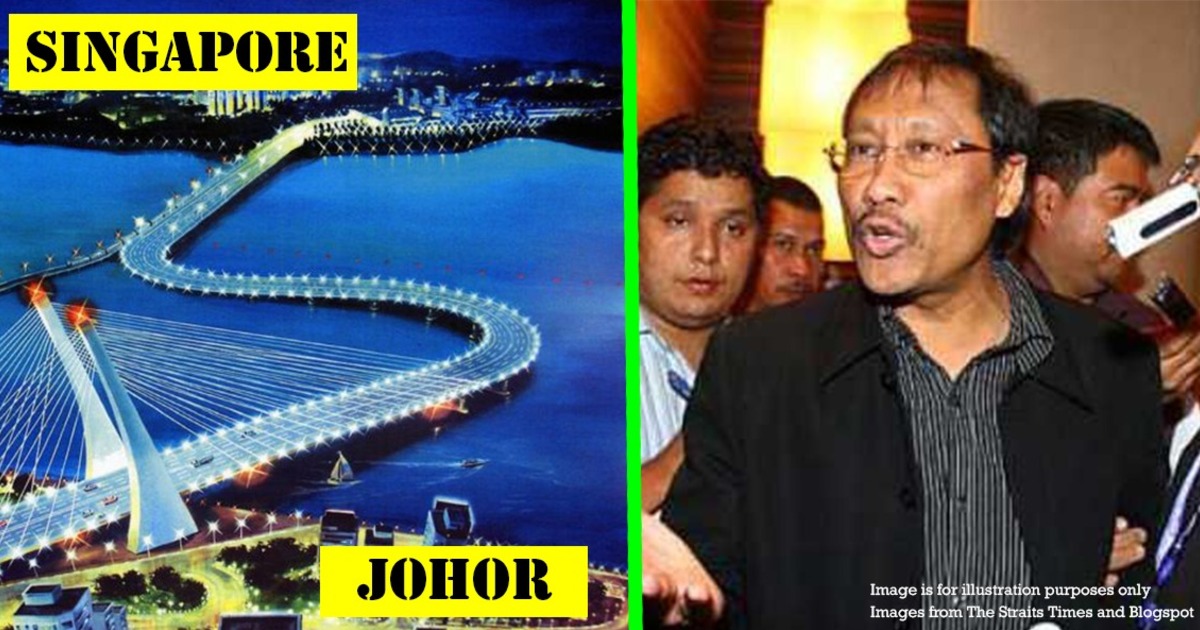 In 2006, this Dato sued for unpaid RM20m middleman fee from SG-JB bridge. He almost won.

As Malaysians, it is not uncommon for us to hear about companies securing contracts through the backdoor, especially through a middleman, provided you offer them a financial “gift”.

And these gifts don’t come cheap. As recently as August 2019, a World Bank survey from 2015 reported that the gifts are worth around 3.3% of the contract value. To put things into perspective, for a contract worth RM1mil, you would have to pay the middleman approximately RM33,000. And such “gift-offerings” are more widespread in our country than some of us dare to believe. The same World Bank survey also discovered that 51.4% of Malaysian companies are expected to offer gifts to secure government contracts.

But what happens if a company that secured a government contract through a middleman, REFUSES to pay him afterwards? This exact scenario happened in the early 2000s, when Merong Mahawangsa Sdn Bhd, which won the RM640mil Johor-Singapore crooked bridge contract, refused to pay their middleman, Dato’ Shazryl Eskay his promised fee of RM20mil.

This story began on 5th July 1996, when the then (and now) Prime Minister, Dr Mahathir Mohamad, proposed replacing the Johor Causeway with a crooked S-shaped bridge. The government was ready to pay RM640mil for this bridge project, which naturally attracted many companies to bid for it. But one company, Merong Mahawangsa, went the extra mile to secure this multimillion-ringgit project.

Merong Mahawangsa approached Dato’ Eskay, who claimed to share good relationships with the government of that time. Dato’ Eskay promised to secure the bridge project on their behalf. All it took was a fee of RM20mil, which was roughly 3% of the project’s value. This was agreed upon and signed in a contract, but only IF he can secure the project.

Why did Merong Mahawangsa refuse to pay? They had 2 reasons. First, they claimed that it was illegal to use Dato’ Eskay’s good relationship with the government to secure the project. Which can sound surprising, considering that was the reason they approached him in the first place. They referred to Section 24(e) of the Contracts Act 1950 which says,

“24. The consideration or object of an agreement is lawful, unless…(e) the court regards it as immoral, or opposed to public policy...”

Secondly, remember the clause we told you to remember earlier? In that clause, it’s said that Merong Mahawangsa would only have to pay the RM20mil fee IF the bridge project is continued until it’s completed. So, when the project was terminated, Merong Mahawangsa claimed that they had no obligation to pay Dato’ Eskay.

Second, he said that Merong Mahawangsa had already benefitted from the RM155mil compensation from the termination of the bridge project. So, it was only fair to pay out the RM20mil promised to him.

Their reasons were submitted to the courts and the judges had to decide who was right—or depending on your point of view, less wrong in this situation.

They went to three courts...and got three different answers

This case kicked-off in the High Court of Kuala Lumpur. But every time a decision was made, it was challenged, until the ultimate verdict was given by the Federal Court, the highest court of Malaysia.

The judge here decided that the contract was legal because there was not enough evidence to prove otherwise. He even went on to say that Dato’ Eskay was doing the public some good by securing this project for Merong Mahawangsa, since the bridge would have benefitted the general public if it had not been terminated.

So the contract was legal, which means that the clause which said that the RM20mil only had to be paid if the bridge project was continued was also legal, valid, and must be followed. But since the project was terminated, the RM20mil fee didn’t have to be paid.

The decision was challenged, and brought to the Court of Appeal. Unlike in the High Court, the Court of Appeal did not consider the legality of the agreement at all (and was later criticised by the Federal Court for this mistake).

“...to use his position and interest to procure a benefit from the Government, as the sale of influence engenders corruption and undermines public confidence in the government, which is inimical to public interest...”

In short, Dato’ Eskay using his influence to secure the government project, in exchange for a fee, is an act of corruption. That makes the contract illegal, so they didn’t have to pay Dato’ Eskay.

The Federal Court judges had more to say,

“...we could not fathom how the illegal agreement could be upheld by the [High] court or how illegality could pass without a word of comment by the Court of Appeal…”

If you’re still not sure: using a middleman is illegal

To sum things up, the multimillion-ringgit project was found to be procured by Merong Mahawangsa through unlawful means. When they hired Dato’ Eskay, who used his influence and good relationship with the government to secure it, their method went against public welfare and policy.

The Malaysian government today has no intentions of reviving this crooked bridge project, and is reported to be looking into constructing a Johor Bahru-Singapore Rapid Transit System Link instead, which is said to be a more viable system to resolve the problem of traffic congestion.