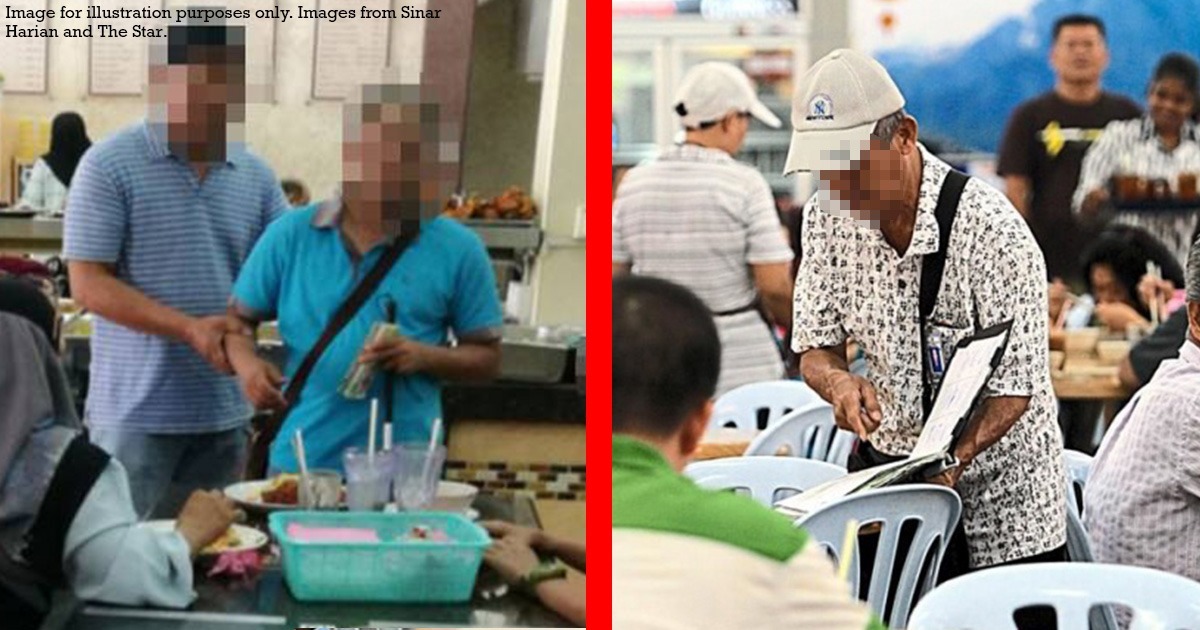 Is it legal for people to ask for donations at kopitiams?

over 3 years ago Ariff Kamil

Suppose three people approached you at a kopitiam while you're having dinner. All three of them say that they are from so and so charity, would you be so kind and give a donation?

But stories of syndicates pretending to be a charity start going through your head. You don’t want to be conned, but you’re also a bleeding heart and want to give.

So you try to figure them out before forking out money. All three are well dressed, fresh faced, and optimistic as usual. Clean clothes, clean intentions. All three have brought proof to convince you that they are legitimate, honest-to-god-cross-my-heart-and-swear-to-die real charity, and your money will go to some sick children or stopping turtles from eating the millions of straws we threw away thanks to our boba addiction.

This is their proof. Pay attention to it: we’ve bolded and coloured it for easy reading.

He pulls out a folder and shows you a very clear, convincing, perfectly laminated with no air bubbles a certificate of registration under the Registrar of Society (ROS), signed by The Government itself. He then gives an Obama-esque ‘We can do it’ speech about what they do, and tells you their website you can check out yourself, www.realcharity.com.my. You check and the website exists, which matches the details he mentioned before.

Mr B pulls out his ROS certificate. But that’s just par for the course. He does one better: he pulls out a brochure for you, filled with every single effort your donation could do if you would just hand them a nice, sizable donation in multiples of 10. A picture says a thousand words, but the twenty pages of pictures and newspaper cutouts scream: Will You Look At Those People We've Helped, We're A Real Legitimate Charity Sir Or Madam. You swear soft, melancholic music plays as you flip through it.

So Mr C shows his certificate from ROS too. Then he starts to fumble through his pockets. Top, sides, both back pockets, till he remembers what he needs is shoved deep in his left pocket, wedged underneath his oversized smartphone.  He pulls out a folded piece of paper, frayed at the edges and worn out where the folds crease. It's a permit from Polis Diraja Malaysia (PDRM), saying his charity is authorised to ask for donations. There’s also a smudge of chili sauce at the bottom. Eww. He hands it to you to read, followed by a bright smile.

Who do you trust? No peeking for the answer.

The correct answer is:

Only organisations with a permit from PDRM can collect street donations

Believe it or not, Mr C and his frayed out permit from PDRM is the only one allowed to do it. Under the House to House and Street Collections Act 1947, a person who solicits donations on the streets, public places or places of business (eg. a kopitiam), must obtain a license from the police in order to collect donations. In the legalese, it says under Section 3(1):

“Subject to the provisions of this Act, no collection shall be made unless...a licence for the promotion thereof are satisfied.”

So slick Mr A with his polished speech, and Mr B with his sob inducing brochure, are actually breaking the law. Under the same Act, in Section 3(3), unless they have a permit to ask for donations, they can be either be fined not more than five thousand ringgit, imprisoned not more than two years, or both.

(Note: We know some of you might wonder how a legit police permit for soliciting donation looks like. We’ve contacted PDRM on this, and shall update the article promptly when we get to secure a copy.)

Surprisingly, this fact tends to fly under the radar, since there are still people going around asking for donation and receiving it, without having a permit. Back in 2015, our former Inspector-General of Police (IGP), Tan Sri Khalid Bakar, has even made a statement on it to Bernama, responding to questions about street solicitors collecting donations for Palestine.

“Individuals or organisations wanting to collect donations for humanitarian fund have to obtain permit from the Royal Malaysia Police (PDRM) before doing so.” —Tan Sri Khalid Bakar to Bernama.

So everything should be clear now, right? The law spelled out that you need a permit, and the ex-IGP himself has stated the same.

Then you hear the sound of coins dropped into a slot: another challenger appears. A teenager wearing a songkok and baju melayu is going around asking for donations in the coffee shop. Unlike the previous three, this one didn’t have a brochure. All he has is a converted biscuit tin, with a small slot cut through the metal lid, and a printed out sign saying, “DERMA MEMBINA MASJID KAMPUNG BETUL”, pasted on the front.

You want to speak up and ask him for his police permit, but he points out a small fine print under the DERMA sign which says: “Religious organisations asking for donations is under the jurisdiction of the state’s religious body.”

Yes. Islamic charities are under the state’s religious body

Technically, it’s true. Organisations or committees collecting donations to help out the Muslim community is under the jurisdiction of the state’s Syariah law, which differs from state to state, depending on the Majlis Agama Islam Negeri. Let’s use Selangor’s laws on this as an example.

Under Section 106 (1), Enactment No. 1 of 2003, the Majlis may give a license to a person or body to collect money or charitable contributions to support the promotion of Islam, or the benefit of Muslims. So this could be the typical mosque building donation drive, and can even extend to collecting donations for Muslims in other countries such as Palestine.

So can we donate to this nice, songkok wearing guy at the coffee shop? Not quite. The Majlis may have authorised them to collect donations, but there is a limitation: They are not allowed to ask for donations on the streets. If you went through Section 106 itself (god bless you), you might notice that there is no mention of where they are allowed to collect donations.

The former Director General of JAKIM, Datuk Othman Mustapha, has come out with a statement to clarify on this. In a statement to Utusan Malaysia, he stated that they aren’t allowed to ask for donations in public places. This covers going from house to house, shopping malls, night markets, restaurants and other such places. This is a requirement set up by each state’s Majlis, and if they don’t follow it, their license can be revoked. They are only allowed to ask for donations from corporate figures, government agencies or private institutions.

Listen to your Hati

All of these requirements for permits, license, and restrictions on where we can ask for donations is for a good reason. Malaysia is one of the most giving countries, and people with criminal intent can see us as easy pickings. The safest option is still to send your donations directly to the organisation itself. Most of Malaysia’s NGOs and their contact details are listed on Hati.my. That way, you’ll never have any doubts where your money would end up at.