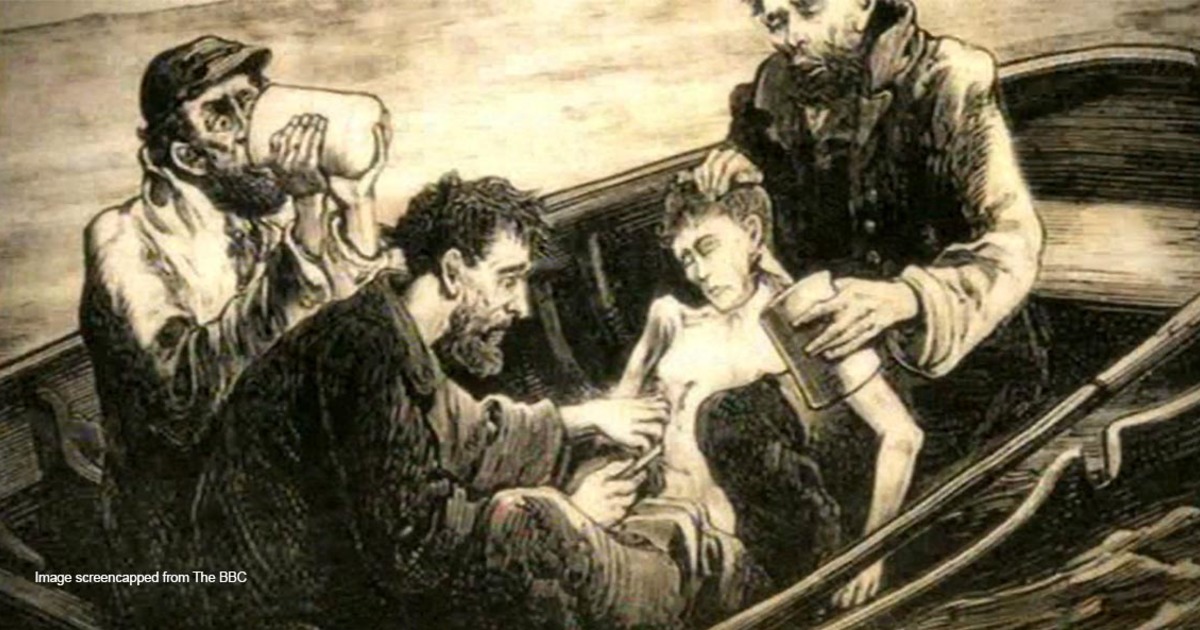 Does Malaysian law allow cannibalism if you had no choice?

If you’re a cannibal, never show up late for dinner, or you may get the cold shoulder.

Jokes aside, cannibalism is a major taboo in most civilizations, although cases still happen in modern times; whether as a last resort, in times of famine, or just simple curiosity.

The question of how responsible someone can be for their actions when it comes to their own survival has been asked since civilization began, most notably in the Plank of Carneades; a thought experiment by the Greek philosopher Carneades that presented a scenario of two shipwrecked sailors (A and B) and a plank that only supports one person.

If B pushes A off the plank in order to survive,

Is B legally and morally responsible for A’s death?

If you’re having trouble answering this hypothetical question, imagine how hard it must be for lawmakers to do the same – especially when it brings real-world consequences. In order to see where Malaysian law stands on this, we first have to look at a book called….. Life of Pi

If you remember, the name of the tiger trapped on the boat was Richard Parker. This wasn’t a random name invented by the author. In fact Yann Martell commented on the choice of name, saying “So many Richard Parkers had to mean something.” He was referring to a strange series of real-life and literary coincidences where people named Richard Parker have been involved in shipwrecks, a famous one being an Edgar Allen Poe novel where a cabin boy named Richard Parker was eaten by the other survivors after their whaling boat sank.

Well, the case we’re about to examine involves cannibalism that the perpetrators tried to defend as necessary. This was the case of R v Dudley and Stephens which happened in the UK in the 1860’s, where the survivors of a shipwreck claimed they had no choice but to kill and eat a cabin boy named…..Richard Parker.

Yachts are nice. Many people aspire to acquire one, it is a symbol of wealth and excess. In 1867, an English yacht called the Mignorette was purchased by a man from Australia named John Henry Want.

At that time, the only feasible way to get the ship from the UK to Australia was to sail it there. Want’s initial attempts to gather a crew to sail the yacht were unsuccessful, as the Mignorette was a relatively small vessel that wasn’t made for long voyages, and the journey was quite lengthy (24,000km).

You might say Want really want-ed to make the trip, as a crew of four was eventually assembled. They were Edwin Stephens, Edmund Brooks, Richard Parker, and the captain; an experienced yachtsman named Tom Dudley. Richard Parker was only 17 years old, and this was his first voyage out on the open seas.

All of them were aware of the customary dangers of a long ocean voyage, but none of them were prepared for what was coming.

The sea is a cruel mistress

The crew set off on 19 May 1884. Two weeks later, a gale (wind from 50 - 102 km/h) brewed around the Cape of Good Hope, about 2500 km off the coast of South Africa. This sort of weather isn’t unusual in itself, but Capt. Dudley gave the order to heave to (setting the ship to take a “break” or to wait out strong winds) so that the crew could get a good nights sleep.

As Richard Parker was sent down to get some tea made, the bulwark (the upper wall of the ship – see fig. 1) got washed away by a strong wave.

Right away Dudley knew they were doomed and the yacht was going to go down. The crew escaped on a shabby lifeboat with some navigational tools, two tins of turnips (what a choice) and no fresh water. The Mignorette sank within five minutes of the launching of the lifeboat, on the 5th of July.

Yup, aside from fighting off imminent starvation, they also had to fend off a shark that night. Everyone held it in for two days, when they shared the first tin of turnips.

One thing thing they didn’t have though, was water.

Considering they were in the world’s largest body of water (the sea), it was sadly ironic that they couldn’t drink any of it. This is because humans can only produce urine that is less salty than seawater, so if you drink it, your body will keep making urine to expel all the excess salt. Simply put, if you drink seawater, you’ll eventually die of….thirst.

That’s why, when they caught a sea turtle, they thought their hydration problems were over. The turtle yielded enough meat to last them about a week, along with the second can of turnips. This solved their food problem for the time being, but not their thirst since the turtle’s blood got contaminated with seawater, making it undrinkable.

It gets worse. Failing to catch any rainwater, the crew resorted to drinking their own urine to try to survive. Uric acid tea probably didn’t agree with Richard Parker, so he later started drinking seawater and, for reasons we previously mentioned, fell sick from it around 20 July.

The “Custom of the Sea”

These are customs said to be practiced by officers and crews of ships out on the open sea, and one of these customs is the practice of shipwrecked survivors drawing lots to see who gets sacrificed and eaten so the others have a higher chance of survival.

With Richard Parker possibly in a coma, Dudley suggested that he be killed and eaten, our Mötley Crüe (ayy classic rock fans) discussed the possibility of going ahead with this grisly custom, but it went nowhere as Brooks heavily disagreed with killing Richard Parker. Later that night, Dudley tried to convince Stephens by saying that Parker was dying anyways, and Stephens had a family waiting for him back home. Both men agreed to wait till morning and see.

The next day, seeing that the prospect of getting rescued was slim at best, Dudley signaled to Stephens and Brooks that it was time to end Parker’s life. Killing Parker before he died naturally would better preserve his blood to be drunk.

Parker was killed by having a pen knife pushed into his jugular vein. Dudley and Brooks consumed most of the macabre feast, Stephens had very little. It also seemed that life decided to present them with an ironic twist – not long after killing Richard Parker, the men managed to catch some rainwater to drink and, a few days after that, were rescued by a German ship.

This was July 29th. They had spent 24 days shipwrecked at sea.

Dudley was very straightforward with what happened to Richard Parker and did not attempt to hide the fact that Parker was, to him, an unfortunate sacrifice due to necessity. The people in Falmouth (where they were dropped off by the German ship) were largely sympathetic towards the crew. What happened was terrible, but Dudley justified that they followed well-established maritime traditions.

But there’s a twist: There was a similar case ten years prior, and English authorities were looking to settle the law in regards to this custom once and for all.

The survivors appeared before a magistrate in Falmouth, and Brooks was exonerated (cleared from fault) because he was deemed to have little to do with the planning or the murder of Parker. Dudley and Stephens, however, were arraigned (called to court) on murder charges.

During the trial in Exeter, Judge Baron Huddleston began by giving a detailed explanation as to why the law could not recognize the defence of necessity for murder. The jury was later presented with 2 choices: to find the two men guilty, or to return a “special verdict”, an unusual judicial procedure which referred the case up to a higher court.

At the time the public sentiment generally backed Dudley and Stephens, and so the case was pushed up to a higher court; the Queens Bench. The captain and Stephens were then convicted of murder and sentenced to death, with a recommendation for mercy. In the end, the home secretary seemed to have agreed with the recommendation as they eventually stepped in and settled on a sentence of six months of imprisonment.

So… what does this case have to do with us Malaysians?

Well, this case established a precedent (where old cases are used as a reference for judgment) in the common law world in that necessity is not a defence to murder.

Lets look at how the defence of necessity works in Malaysia. Section 81 of our Penal Code says:

Nothing is an offence merely by reason of its being done with the knowledge that it is likely to cause harm, if it be done without any criminal intention to cause harm, and in good faith for the purpose of preventing or avoiding other harm to person or property.

That means that something is NOT an offence if is done with the knowledge that it will cause harm – but without a criminal intention – in order to avoid harm to another person or property. The act further explains with its own example; a person pulling a burning house down in order to save other people’s lives and property.

An Indian case of Mohd. Bilal & Another v State talks about this. Basically Mohd. Bilal used an electrical cable to lasso his father to prevent him from walking away when he was seething in anger, to prevent him from injuring himself. The father was consequentially strangled by accident and died. The necessity defence was invoked because Mohd Bilal only had the intention to stop his father from getting hurt, not to kill him. The court allowed the defence.

Why is an Indian case even relevant? The Indian Penal Code is similar to ours so much so that Indian law has also been referenced in Malaysian courts before.

So… does that mean Malaysian law allows cannibalism if it’s necessary?

Perhaps quite thankfully, the legal status of cannibalism out of necessity still remains as a question asked by curious law students, such as the notes in this PDF (pg. 22) where a Dr. Siti from Universiti Malaya is of the opinion that there must be a very strong justification if it involves cannibalism as a private defence.

In a way, the answer to whether you can eat someone out of necessity in Malaysia remains, like the Plank of Carneades, an academic thought experiment.

But there’s one way to avoid putting this to the test –  if you’ve made it in life and decide to buy yourself a boat, don’t hire anyone named Richard Parker.