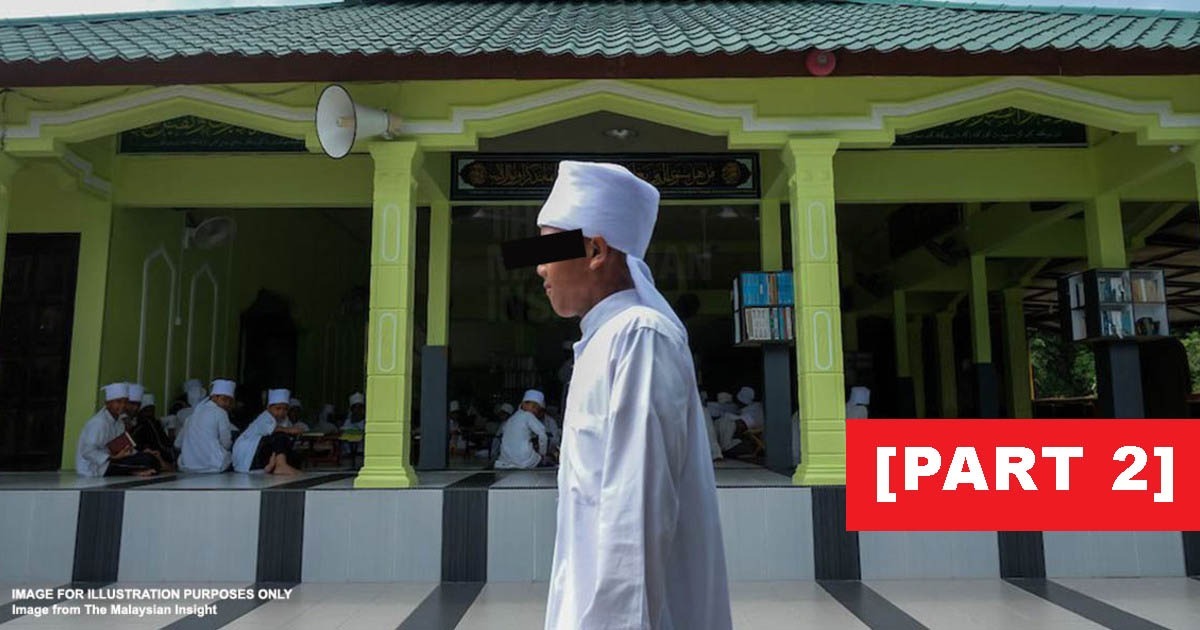 over 2 years ago CY Lim

[Read Part 1: The untold story of the "bin Abdullah" children in Malaysia ]

Some of you may remember our article from before where we interviewed Rahman and Aisyah. As a quick refresher, Rahman and Aisyah have a son named Adam, who was born 3 months after their wedding. At the time of his birth, Adam’s name was registered as Adam bin Rahman with a peculiar notation written the bottom of Adam’s birth certificate: “Permohonan s. 13”. The happy family thought nothing much of it.

Twelve years later, they found out what it meant. When Adam turned 12, they went to the National Registration Department (NRD) to apply for Adam’s identification card (IC).  However, the NRD refused to allow Adam’s name to be registered as Adam bin Rahman. Instead, the NRD informed Rahman that his son’s name must be listed as...Adam bin Abdullah. Rahman decided to cancel his son’s IC application as both parents did not know how to explain the anomaly to Adam.

We’re covering this issue again, because of another family who faced the same dilemma. But this time, they decided to sue the NRD.

The family in Johor that challenged the NRD

The father, MEMK, then sued the NRD.

The High Court’s decision was in favour of the NRD. The Court of Appeal then overturned the High Court’s decision and ruled that the law is clear; an illegitimate child’s surname can be either the mother’s (if she volunteers that information) or the father’s (if he registers himself as a father under section 13 and requests for the child to bear his surname). The COA essentially ruled that section 13A can be applied to MEMK’s case to allow NAW to carry his name.

The case was then appealed to the Federal Court by the NRD and the decision was announced several months back.

Before we proceed any further, you may be wondering what’s this pesky section 13 referencing? To properly understand the nuances of this issue, sections 13 and 13A of the Births and Deaths Registration Act 1957 (“BDRA 1957”), the 1981 fatwa and 2003 fatwa are important. This is covered in detail in our previous article on Rahman’s family but in brief:

Section 13 BDRA 1957 – where a child is illegitimate, no name of any person shall be registered as its father unless there is a joint request made by the mother of the child and a person claiming to its father

2003 fatwa – an illegitimate Muslim child is one born within the first six months of the parents marriage. This child cannot carry the “surname” of the anyone claiming to be its father

Now that you have some background to this matter, let’s look at the interesting approach taken by the majority of the Federal Court.

The decision in the Federal Court was split

A total of seven judges sat to decide this appeal. Out of the seven, four of the judges agreed on one decision (which became the final decision, as it was the view held by the majority). The remaining three judges disagreed.

In essence, the majority of the Federal Court decided, four against three, that NAW should not be given the bin Abdullah “surname”. The NRD was ordered to remove the words “bin Abdullah” from NAW”s birth certificate.

But there’s a plot twist.

Whilst NAW will not have “bin Abdullah” on his birth certificate, he’s still not allowed to carry his father’s name, MEMK, either.

If you’re reeling from shock, hang on because we have another plot twist for you. The majority of the Federal Court decided in that manner because…

Malays don’t have a surname

The majority of judges that agreed, said that a birth certificate with the notation “Permohonan s. 13” is stating that the birth certificate is for an illegitimate child. As a reminder, in section 13A of the BDRA 1957, it’s stated that an illegitimate child’s surname could be the mother, or someone claiming to be the father. However, MEMK can’t use this law to include his name as NAW’s surname, because...Malays have no surname.

Why is that? This is because the majority believed that the word “bin” or “binti” means son of or daughter of. They then drew a difference between a personal name  and a surname. Section 13A of the BDRA is only meant to apply for surnames and it cannot be used to allow NAW to carry MEMK’s name as MEMK is a personal name.

This was what the majority said:

“...to my mind a surname refers to a family, hereditary and inherited name, distinct from a personal name. In the present case, MEMK is obviously not a family name or hereditary name or inherited name commonly shared by, for example, the wife and all members of the family. Instead, it is merely his personal name...It is difficult to appreciate how the personal name of the father may also be a surname at the same time” – Datuk Rohana Yusof, President of the Court of Appeal

The three judges that disagreed took a different view on how surnames ought to be interpreted. They thought that excluding patronyms (where the fathers’ name forms part of their children’s name) from the definition of surnames under the BDRA, would mean that Section 13A of the BDRA would not be applicable to a vast majority of Malaysians. This is what they had to say about section 13A:

“...the section allows for a formal acknowledgement of paternity, for purposes of record in the register of births...As such is its object, the application of a purposive approach to statutory construction would yield the result that the term ‘surname’ in section 13A ought to be construed as referring to both a patronymic name as well as the English Oxford Dictionary meaning of the word...it cannot simply be concluded that in view of the word used in the section, namely ‘surname’, the entire section i.e. 13A becomes inapplicable to a particular segment of the population. This is particularly so, given that such a conclusion leads to the inapplicability of the entire section to the majority of the population of Malaysia, in respect of an Act that has application, as promulgated by Parliament, to all citizens of the country.” – Datuk Nallini Pathmanathan, Federal Court Judge

In essence, the difference in the views taken by the majority and minority of the Federal Court boiled down to how they chose to interpret the law. The majority took the literal approach (i.e using the literal meaning of the word) whilst the minority took the purposive approach (i.e interpreting the words in a manner that would allow the purpose of the law to be fulfilled).

Now, remember we mentioned that several fatwas were also part of this legal kerfuffle? Well, the next question posed to the Federal Court was this: Should the NRD use syariah laws to determine a child’s last name?

The answer is yes

The answer might seem simple: they’re Muslims, so obviously they should follow their state’s syariah laws. However, in our previous article on Rahman and Aisyah, we’ve explained how syariah laws and federal laws...might not agree with each other.

In brief, the 1981 and 2003 fatwas on how to name a child are in conflict with the Births and Deaths Registration Act (BDRA). The two fatwas only allows an illegitimate child to be named bin Abdullah, while the BDRA allows the parents to use either the mother or father’s surname.

But since the laws are conflicting, which one should they follow? Syariah law, or federal law? As such, this was the position adopted by the majority in the Federal Court:

“It is therefore by constitutional prescription that the Muslims in this country are subjected to the general law enacted by Parliament as well as Islamic laws enacted by the State Legislature.” – Datuk Rohana Yusof, President of the Court of Appeal

So basically, the majority of the judges decided that they should follow both laws, federal and syariah law.

However, the dissenting judges found that the Federal Constitution specifically made the registration of births and deaths as a matter to be regulated by Federal law only. In other words, the State Islamic laws would not be applicable when it relates to registering births and deaths.

“...The BDRA 1957 is therefore, for all intents and purposes, a federal law dealing with subject matter that falls within the Federal List namely, registration of births and deaths...Islamic law has no application insofar as the registration of deaths and births is concerned.” – Datuk Nallini Pathmanathan, Federal Court Judge

At this juncture, you may be wondering, if State Islamic laws apply, why wasn’t NAW given the bin Abdullah “surname”?

Each state has their own syariah laws

In MEMK’s case, the NRD had relied on the 1981 fatwa to grant a ‘bin Abdullah’ to NAW. However, whilst this 1981 fatwa was made by the National Fatwa Committee, the fatwa was not gazetted (given legal status) in Johor.

“The opinion of the National Fatwa Committee or a fatwa becomes law in the State of Johore and would be legally binding only if it is gazetted in the State Gazette under section 49 of the Administration of the Religion of Islam (State of Johor) Enactment 2003 (Enactment No 16 of 2003). That Enactment requires that a fatwa becomes law and only has the force of law upon gazetting and a provision on the procedure of making a fatwa is articulated in section 48.” –  Datuk Rohana Yusof, President of the Court of Appeal

Each state in Malaysia is given the power to legislate on Islamic laws. These Islamic laws cover matters such as succession, marriage, divorce and legitimacy. But not all states have adopted the 1981 fatwa. In order for it to become law in the state of Johor, the fatwa must be gazetted under the relevant Johor enactments (State laws) and publicised.

As Johor has not adopted the fatwa on naming an illegitimate child, the NRD cannot impose the 1981 fatwa on MEMK and NAW. By doing so, the NRD acted outside the powers given to it. Whilst Islamic law can be relied on in registering the birth of Muslim children, there must first be such a law in that State.

The minority had also agreed with the position taken i.e that there was no basis to prescribe NAW with bin Abdullah, albeit with slightly different reasonings, which we won’t go into for the purposes of this article.

Where does this leave us?

In a nutshell, the law as it currently stands can be understood as follows:

So whether or not an illegitimate child would be given the Abdullah name, depends on the syariah laws in the state. For MEMK and NAW, the NRD has been ordered to remove “bin Abdullah” from NAW’s name. NAW will now only have his given name, without a patronym or any other surname. It’s like if your child’s given name is Muhammad Ali, and the NRD slapped on “bin Abdullah” on it. The NRD will now have to remove “bin Abdullah”, leaving your child’s official name to be...Muhammad Ali (which is pretty badass in our opinion).