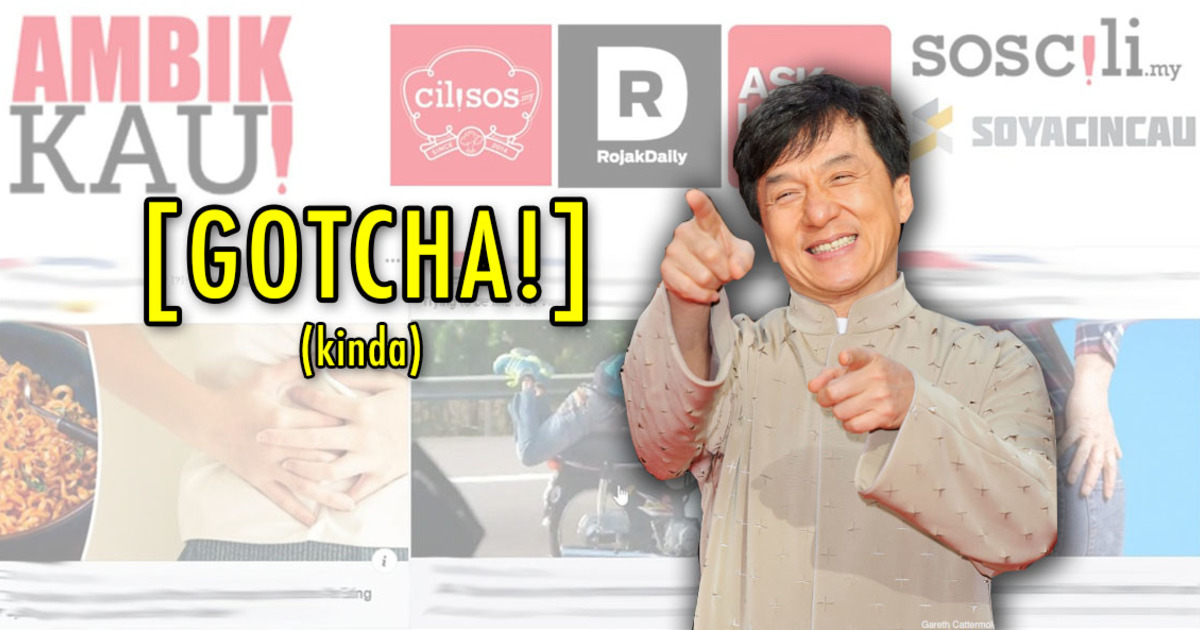 Recently, you might’ve seen an article about Malaysian women’s boobs being 2nd smallest in the world, or perhaps a corpse found in a dam, or even 10 reasons why Malaysians no longer believe in Mahathir?

Some are real, but we can’t tell you which ones are, because we didn’t really check. We just copied them off other sites onto a WordPress site and domain we set up in about 4 hours called AmbikKau.com

WHY DID Cilisos/Soscili/RojakDaily/SoyaCincau/Asklegal DO THIS!? So, sites like ours, Rojak Daily, Soya Cincau and AskLegal have long been known in Malaysia for original content. We don’t repurpose, we don’t copy, and we sure as heck don’t make up stuff. And to be honest, there aren’t that many of us around anymore – sites that don’t just repurpose content or news. Our original articles and videos have been shared, and copied so many times that we can’t even begin to count them, so we thought we’d send a big…

On top of that, it hurts each time one of our well-researched articles loses out to “Survey about Malaysian boobs”. So we wanted to show people how simple it can be to build traffic, and how it means little if you don’t particularly like the site you read it on. Also, it was an experiment for us, to tell our writers for the first time in their professional lives….

“Hey, y’know all that stuff we told you about being a good writer? Throw that out the window for 5 days” – Asklegal Editor

It took us 10 minutes to write each article.

Some people who saw the prank commented how much effort we put into this year’s prank. Wellllll….

Typically an article on CILISOS, SoyaCincau or AskLegal would take 2-5 days to write. Why? Well first we need to see what new information we can unearth, then we verify our sources, and write something that can entertain, while hopefully giving you some insight or education into the topic at hand. So for AmbikKau, we just dropped all that nonsense. Yep. Most of these articles were copied the same way these sites have copied from us before. E.g.

With these rules (and a few more from less frequent offenders), each of our publications wrote 15 articles (3 articles per writer, 45 mins of their time), which initially resulted in 60 articles per day on Ambik Kau. So after one day, the site already looked like it had been around for ages! In 7 days, we generated more than 200 articles,and in our writers’ spare time. Imagine if people were doing this in their full time!

“OMG Boss, I love writing for Ambik Kau! It’s so easy and liberating!” – ASKLEGAL writer who asked to remain anonymous because Arjun likes his privacy.

To be honest, our aforementioned SoyaCincau.com AI Bot, CV Control, could’ve done pretty well. If it was real 😉

And one of those articles actually went viral, and was then “covered” by other sites.

So  stay with us… this is gonna get confusing.

Amazingly, this post about Malaysian chesticles was the first post we ever uploaded to AmbikKau. We found this piece of news on The Coverage, which they took from a “study” done overseas.

It goes viral, generating 23,000 views in 24 hours, with thousands of shares. And then, the inevitable happens. 10 hours later… World of Buzz mysteriously launches this old piece of news as well.

It goes viral for them too – 13.6k shares (you might say they stepped on our booby trap)! The MalayMail covered it too! But then some readers pointed out that the article is based on a fake piece of research (which we knew, cos y’know… we check our sources… usually), so they published this…

Without removing the original article (although to be fair, they put a one-line edit to tell you it’s a hoax). Sadly, this one doesn’t go viral (196 shares only), which is also illustrative of the problem with social news these days – the truth isn’t quite as attractive.

So we also copied their correction (which used our featured image, so we used their feature image, boom!) and published it as our own, cos why not? Ironically, World Of Buzz has a plugin that prevents you from copying their articles – no worries though… we just saved the webpage as a PDF, open in Google Docs, and voila!

WHY MALAYSIAN SITES DO DIS!?

Actually, out of the 200 articles we published, only 9 of them got more than 1000 views. But hey, if it only takes 10 minutes to write an article, you can keep trying until you hit gold…

What’s gold? Well according to science, our brains are wired to love sensationalism. And it’s not a new thing.

“A psychological study from 2003 analyzed front-page news stories dating from the 1700s all the way on up to 2001. The study found that regardless of the time period, stories about death, injury, robberies and murder dominated the front-page headlines.” – Why Sensationalism Sells, ScienceLine.org

Better yet if you don’t have the limitations of good journalism.

To be honest, we were surprised how successful this little experiment came off. In 5 days, we actually

That advertiser one surprised us too. But maybe it shouldn’t have. Many advertisers do look at the overall pageviews of a website, even though that has little to do with the actual traction the brand can get. Cos these days, we just click on anything on social media, and share it. So if a site set up in 4 hours can get 50k views in 5 days, how long would it take to develop an ‘audience’ of millions?

So what can we do about this? Well the responsibility lies with… YOU! You need to start thinking about what content you’re sharing, and clicking on, and also caring where it came from – some sources are better than others.

And kudos to our readers, this was one April Fool’s prank they saw straight through (a lot of our other ones got em though)

And we’re actually super-touched that they did. Because they hold us to a higher standard. They know we wouldn’t go down that road (except for laughs and commentary), and to be honest, we felt really really crappy publishing some of these articles (almost all of us anyway – looking at you, Arjun).

Because that’s why our 5 sites were created. To keep you informed, to create conversations that hold us together rather than splitting us apart, and to find the closest thing to the truth.

Even if that means lying to you… once a year.